California’s Pacific Coast Highway is road trip nirvana. Winding along the Golden State’s coast, the famously scenic route boasts some of the best places to visit in California, including inspiring vistas, fun diversions,  and destination-worthy restaurants in California. From the sunny beaches of Southern California to a famous seaside coaster in Santa Cruz, you’ll find countless destinations to fill your coastal itinerary. Plus, with mealtime options including waterfront lobster rolls and a steakhouse with dazzling pink interiors, there’s plenty to fill your belly as well as your Instagram feed. Listed in geographic order from south to north, here are the best stops along the P.C.H. 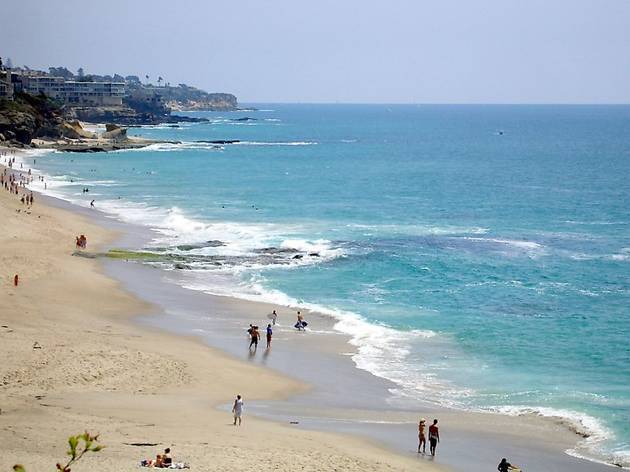 What is it? Dreamy waterfront park offers a beachy paradise in sunny Laguna Beach.

Why go? With palm tree-lined bluffs, golden sand, and azure waters, this is the California that most visitors have signed up for. Follow a blufftop path dotted with landscaped pocket gardens and numerous lookouts that offer sweeping views of the shimmering Pacific. A walkway leads down to the shore where beachgoers sunbathe, swim, and explore craggy outcrops. Pack a picnic, or splurge for lunch at the tony Montage Resort situated just steps away. Note that parking is limited, so plan ahead. 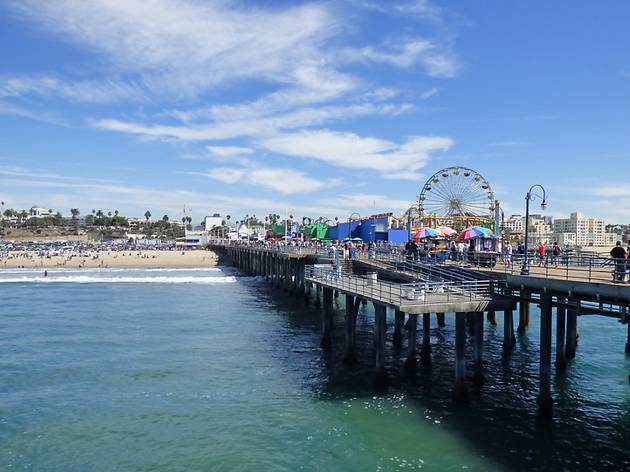 What is it? Jutting out over Santa Monica’s rolling surf, this retro-fun hub bustles with an aquarium, carnival rides, and front-row views of the Pacific.

Why go? This 1909 landmark offers timeless fun in the sun. Stroll its 1,080-foot expanse pausing to gaze at the sweeping views of the coastline, and nab a hand-scooped shake from Soda Jerks. You won’t want to miss lobster rolls at The Albright, mesmerizing sea jellies at the aquarium, and a whirl on the giant Ferris wheel that soars high above water. Just mind the traffic when posing for pics beneath the piers’s iconic arched, neon sign. 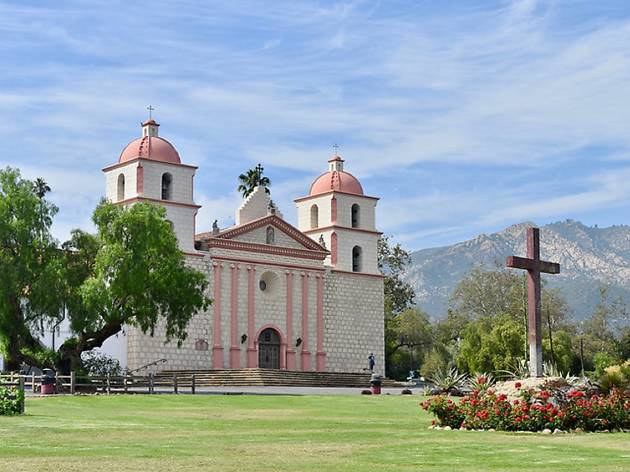 What is it? A magnificent Spanish-era mission with Insta-worthy gardens.

Why go? The story of California missions—native people being subjugated by Spanish settlers—doesn’t exactly scream vacation. Yet, the undeniable beauty of 18th century Spanish architecture as well Santa Barbara’s cactus-dotted landscape are on full display at this “Queen of the Missions” set in the foothills above town. On a self-guided or docent-led tour, you’ll stroll a museum filled with colonial-era artworks, an ornate chapel, historic cemetery, and the highlight: 12 acres of vibrant landscaped gardens brimming with cactuses, citrus trees, and pomegranates. 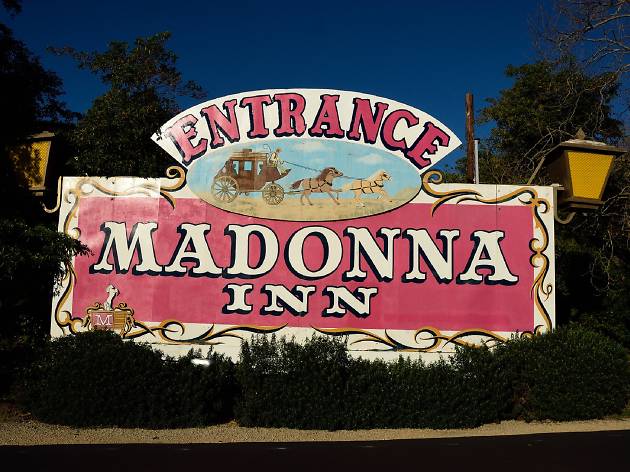 What is it? A themed-inn with multiple eateries and fabulously kitschy interiors offers a perfect pitstop in San Luis Obispo.

Why go? The primary draw of this visually striking, mid-century inn are its 110 rooms outfitted with over-the-top themes such as the rock-filled Cave Man Room and the frilly robin egg blue interiors of the Romance suite. Yet, there’s plenty for casual, daytime visitors, too. Pair meaty steaks with shockingly pink, tufted booths at the Gold Rush Steak House, dig into comfy diner fare at the Copper Cafe, or nab a sky-high slice of frosted cake for the road. And when nature calls, the men’s room is outfitted with a rock-lined, waterfall urinal. 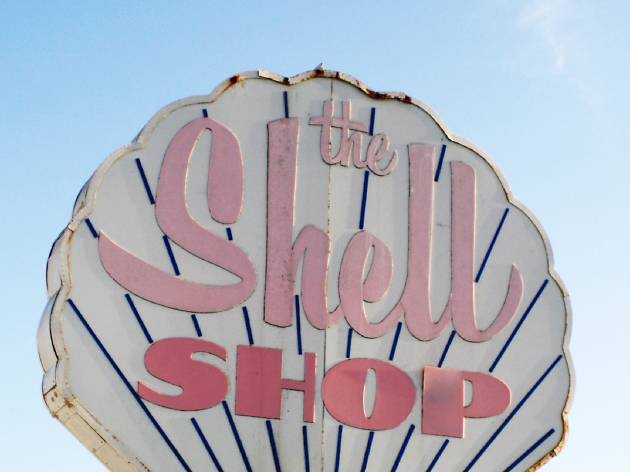 What is it? Throwback, seaside gift shop is worth a stop in sleepy Morro Bay.

Why go? While Morro Bay is known for its nearly 600-foot volcanic rock sitting just offshore, you won’t want to miss this local fixture that’s been selling seashells by the seashore since 1955. Scuba divers aren’t treated to the diversity of exotic shells that fill the many bins within the sizable shop. Shells also comprise hundreds of other touristy items that fill their shelves—remember those monkeys carved from coconuts?—lending the shop its timeless charm. 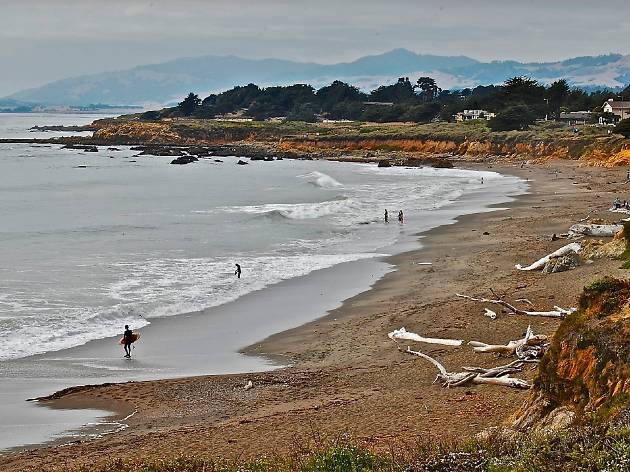 What is it? An idyllic, undisturbed beach in the tiny coastal town of Cambria.

Why go? Officially part of the Hearst San Simeon State Park, this peaceful shoreline immerses visitors in the natural beauty of California’s central coast. A one-mile, wooden boardwalk ambles along a low, seaside bluff, skirting driftwood-lined sands and outcrops with yelping sea lions. Along the way, numerous staircases lead down to the shore for exceptional beachcombing. Go during the morning for quiet contemplation, or at sundown for brilliant, fiery skies. 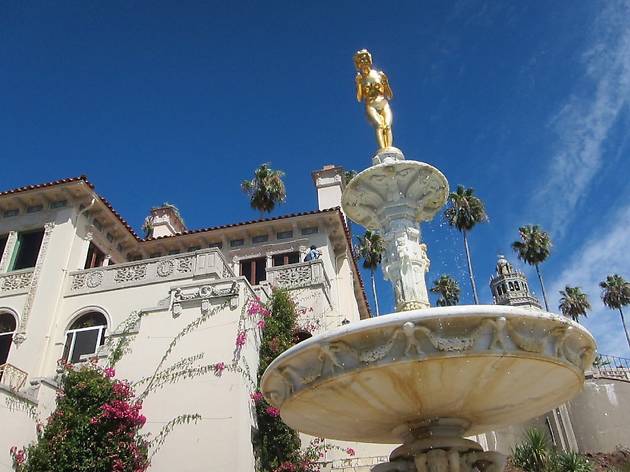 What is it? Mythical hilltop estate in San Simeon lures with enchanting architecture and a rollicking Hollywood past. 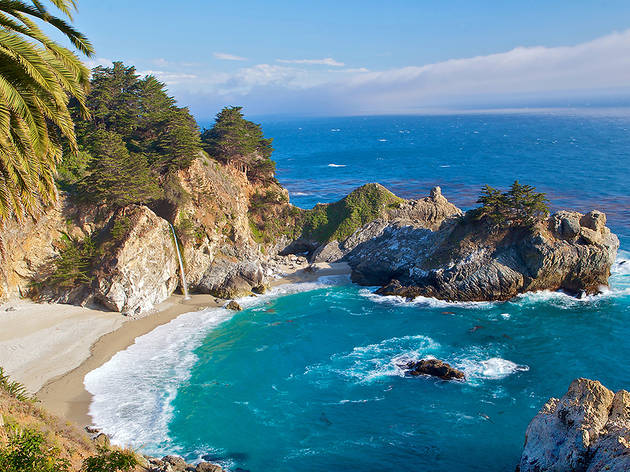 What is it? The best bang for your buck in Big Sur.

Why go? It’s unfair to pick a favorite spot in the coastal paradise that is Big Sur. Yet, if you only had time for one stop, make it the home of the famed McWay Falls. While other noteworthy Big Sur sites require a lengthy hike or drive, visitors can marvel at the spectacular coastal waterfall within minutes of stepping from their car. From the small parking lot, follow a .3-mile trail to a cliffside overlook of McWay Falls cascading onto golden sand lapped by azure waters. Bonus points for exploring nearby Partington Cove, a craggy shoreline within the park—a two-mile drive north of McWay Falls—and overlooks the glimmering turquoise waters of a secluded beach cove. 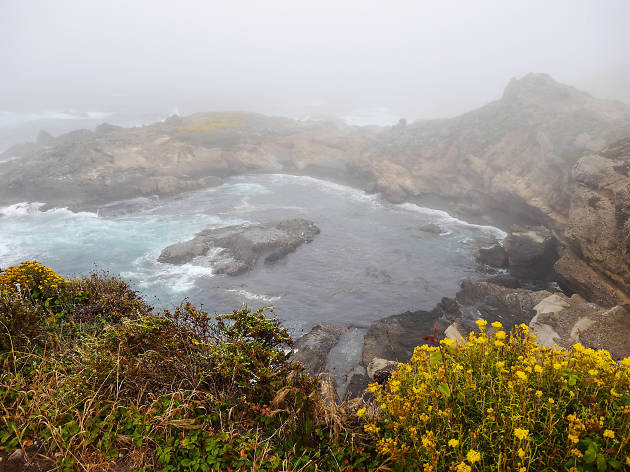 What is it? Likely, the most enjoyable views of your California coastal journey.

Why go? You’ll want to clear your camera’s memory for the gobsmacking beauty awaiting you at this coastal preserve. Often referred to as the crown jewel of the California state park system, this series of rocky promontories is lined with trails that traverse an almost otherworldly coastal landscape with stirring vistas of the Monterey Bay. It’s hard to go wrong here—a captivating scene lies around every bend—but a favorite destination is the Bird Island Trail which skirts beach coves with resting seals and turquoise waters. If you have more time, check out the North Shore Trail which zigzags through tangled pine and cypress forests set high above the Pacific. Note that parking is limited, and most spots fill by 10 a.m. 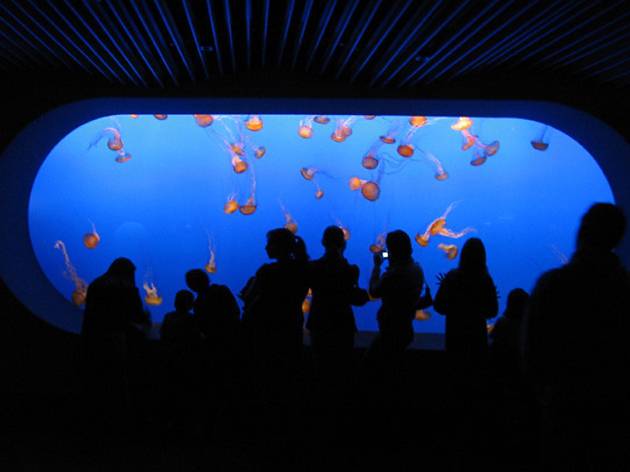 What is it? Recently fictionalized in “Finding Dory,” this world-famous aquarium provides the best opportunity to explore the wondrous Monterey Bay without getting wet.

Why go? Situated directly above bay waters, the dynamic aquarium showcases the Monterey Bay National Marine Sanctuary, one of the most biologically diverse marine ecosystems on the planet. You’ll enjoy intimate views of playful sea otters, feasting hammerhead sharks in the Open Sea exhibit, and scores of sea creatures swimming about a giant kelp forest housed in one of the tallest aquariums in the world. The Aquarium is also renowned for its ocean conservation efforts such as the pioneering Seafood Watch program which ensures diners food choices help foster healthy oceans. 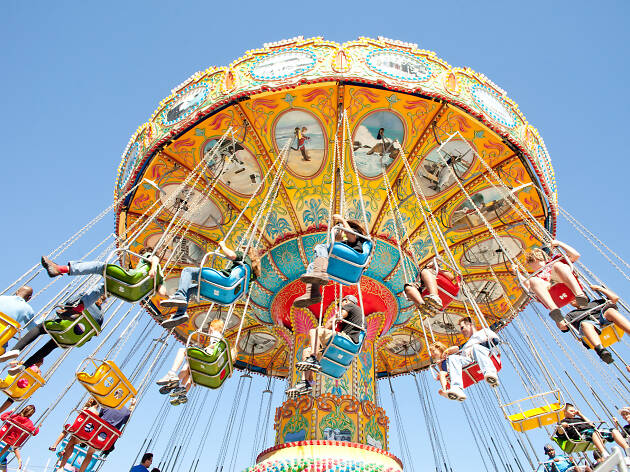 What is it? California’s oldest amusement park delights with thrilling rides, retro games, and waterfront vistas.

Why go? Opened along Santa Cruz’s seafront in 1907, this nostalgia-packed amusement park bustles with midway games, candied apples, and a mix of modern and vintage rides. The Giant Dipper, a legendary 1924 wooden coaster that’s designated as a National Historic Landmark, still elicits screams from its numerous twists and drops. Plus, nabbing rings to toss into the clown’s mouth on the historic Looff carousel never gets old. Ditto the corn dogs and funnel cakes dished up at the many eateries lining the shorefront park. You’ll also find mini golf, a sprawling arcade, and a seasonal lineup of free concerts and movies on the beach. 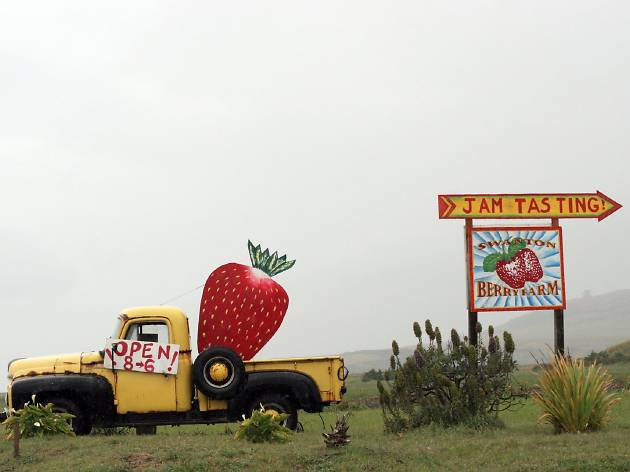 What is it? Achingly cute coastal farm stand charms with pies, jam and U-pick berries.

Why go? Situated 12 miles north of Santa Cruz, this organic berry farm marked by a vintage yellow pick-up truck has become a must-stop for coastal roadtrippers. The indoor farm stand is crammed with treats made from its organic fruit including pies, scones, shortcakes, cobblers, and lemonade. A self-serve tasting bar allows you to sample their extensive lineup of homemade jams. Plus, you can fill up baskets of strawberries during their seasonal U-picks. Pack a picnic to enjoy at one of the many picnic tables strewn inside and out, and remember to bring change for the honor system till. 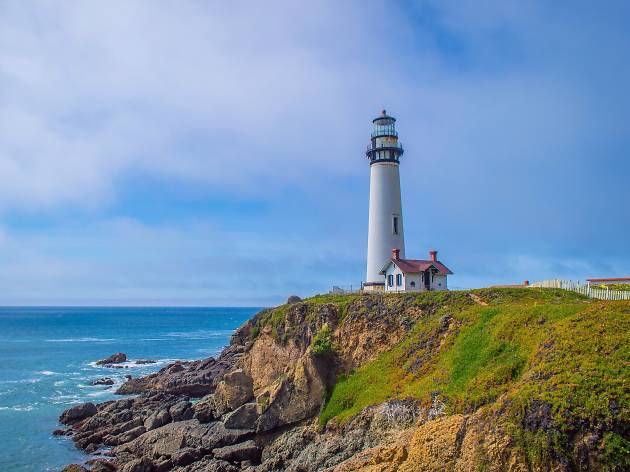 What is it? Explore tidepools and spot whales at this spectacularly scenic stop with a historic lighthouse.

Why go? Located 50 miles south of San Francisco, it’s impossible to miss this 116-foot beacon named for the Carrier Pigeon, one of the many ships that wrecked offshore before the lighthouse was constructed in 1872. You’ll discover more fascinating tales via informative exhibits inside a former fog signal building—the actual lighthouse is closed for repairs—but you needn’t be a history buff to marvel at the striking coastal surroundings. Numerous walkways lead to dramatic overlooks perched above the churning Pacific, offering an exhilarating spot to snap a pic or spy migrating whales. The lighthouse is flanked by two sandy beaches with the northernmost one hiding creature-filled tide pools. Plan in advance, and you can stay the night via a hostel housed within the former lighthouse keeper’s digs. 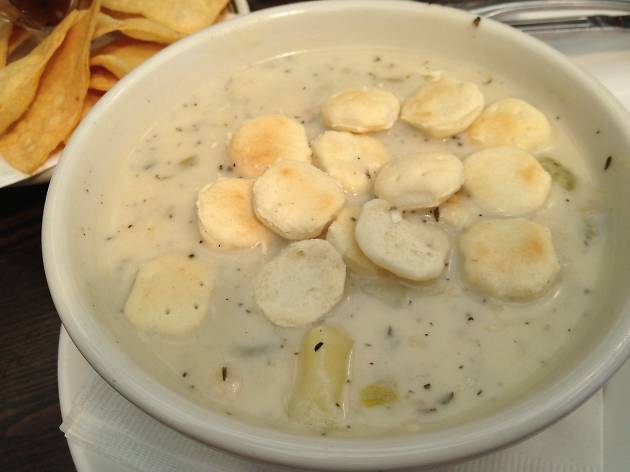 Why go? At Sam’s, you can sample things that have made the pastoral, coastal community of Half Moon Bay famous: fresh seafood and small independent farms. Set on the shores of Pillar Point Harbor—where visitors can still buy seafood direct from fisherman’s boats—the waterfront eatery dishes up New England staples such as lobster rolls and clam chowder in a dining room with sweeping vistas of the coastline. During migrating season, it’s not uncommon to spot the misty plumes of humpback and grey whales just offshore. Outside, a heated patio and sprawling fire-pit warmed deck is the place to be at sunset. 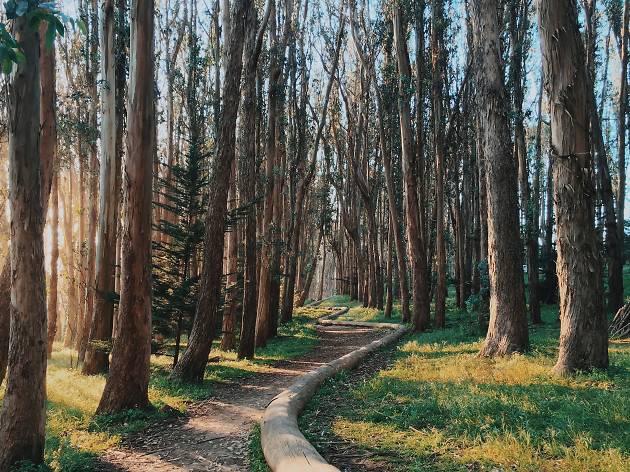 What is it? San Francisco’s singular national park teems with history, nature and primo views of the Golden Gate Bridge.

Why go? Before becoming a national park in 1994, The Presidio served as a military outpost for three nations including Spain, Mexico, and the U.S. Witness traces of this past at numerous historic sites such as Fort Point, an 1853 brick fortress hidden beneath the Golden Gate Bridge and featured in Hitchcock’s “Vertigo.” Other historic structures house modern attractions such as the Walt Disney Family Museum set in former officers barracks and the House of Air trampoline park occupying a former airplane hangar. Don’t miss a stroll along waterfront Crissy Field which leads to the base of the Golden Gate Bridge, or historic Lover’s Lane which follows an environmental artwork by Andy Goldsworthy through a lush eucalyptus forest. The park’s eateries often reference its history as in the Mexican fare at Arguello Restaurant and classic cocktails at the retro-chic Presidio Social Club. Make it a weekend with the Lodge at the Presidio, an upscale boutique inn set in a newly transformed military barrack. 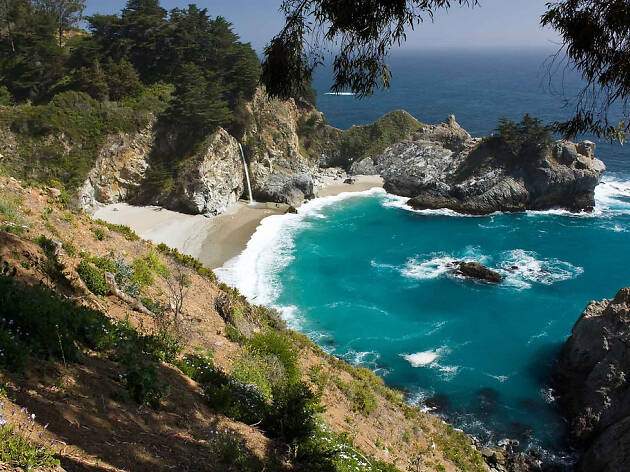 California offers a wonderfully diverse landscape of mountains, deserts, beaches, and vineyards. Plus, within each of these distinct settings, you’ll discover unique pockets of vibrant culture, stylish design, and some of the best restaurants on the West Coast.