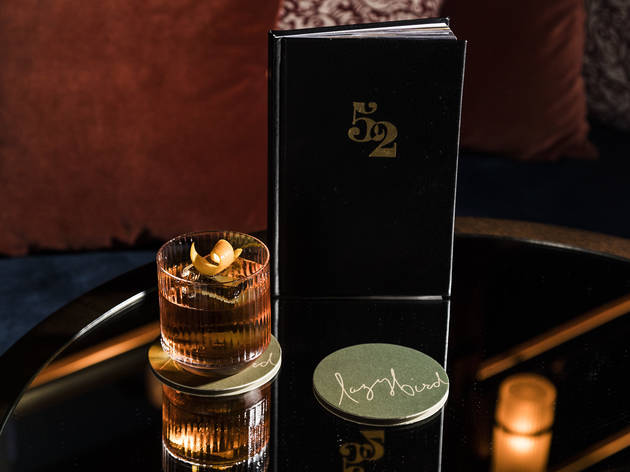 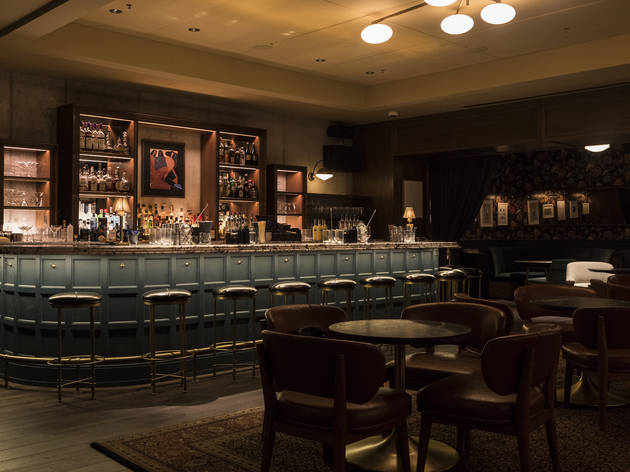 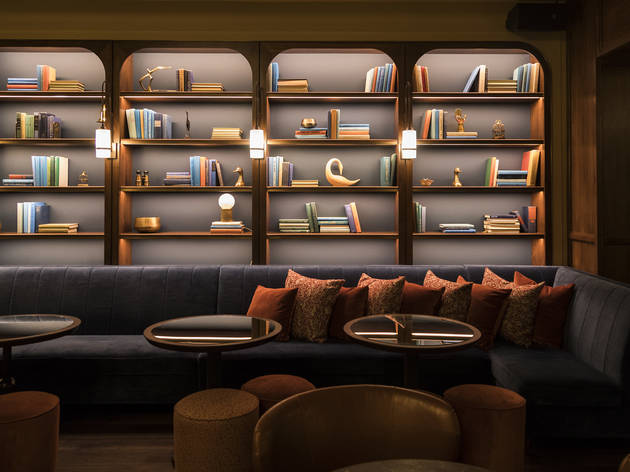 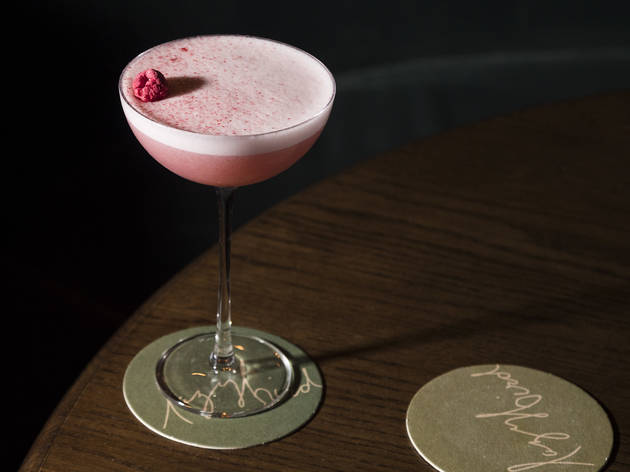 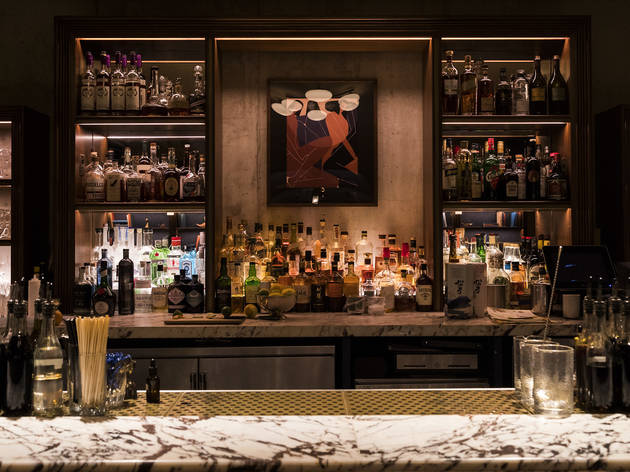 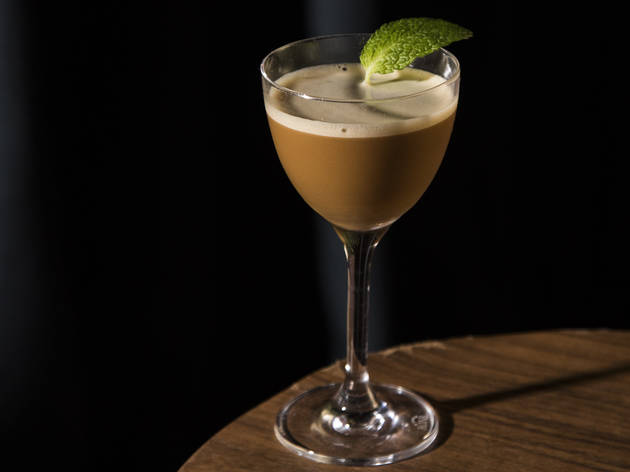 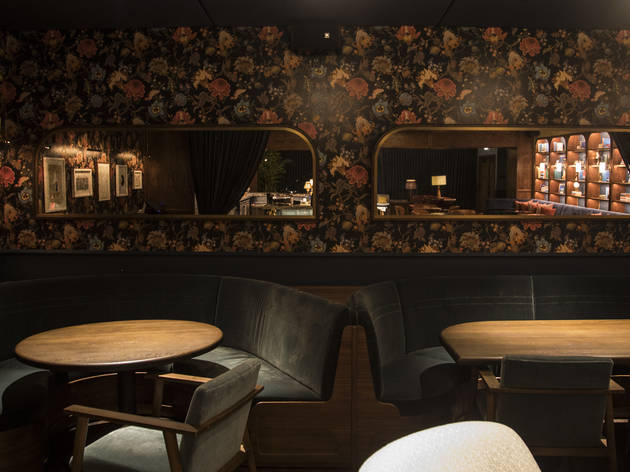 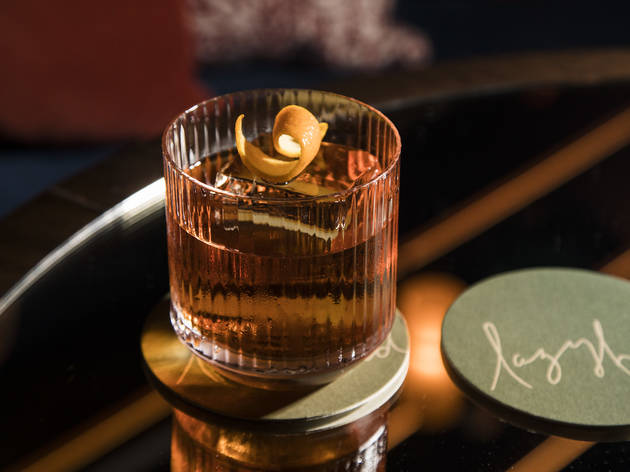 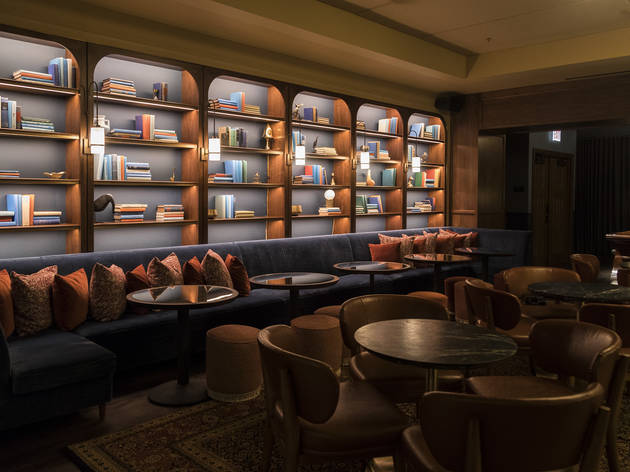 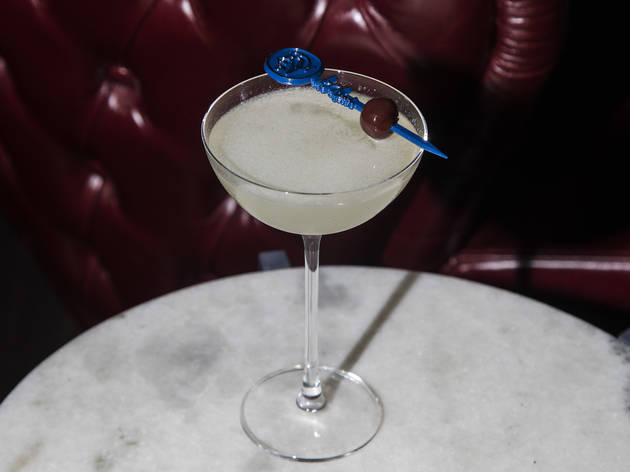 I’ve been thinking a lot about the Cheers theme song and the idea of a place “where everybody knows your name.” The thing is, on nights when I can sneak away and splurge on a round of craft cocktails, I seek out places where no one knows my name. It’s not that I’m anti-social—more than anything, it’s about reveling in quality time with close friends.

Lazy Bird, the bar in the basement of the Hoxton hotel helmed by Lee Zaremba, ticks all the right boxes for that kind of night out. The space is so dimly lit that you can barely see across the room, and seating is configured in a way that gives each party a sense of privacy—even if you are seated two feet away from the next table. And don’t plan on checking your email or Instagram feed while you’re here; the subterranean space is a black hole for cell service.

Those qualities alone make Lazy Bird a solid watering hole. But when you toss in Zaremba’s pièce de résistance of a menu—a whopping 52 classic cocktails that have been refined and perfected—this place easily enters Best New Bar of 2019 territory.

Just as my date and I snagged seats along the wall opposite the bar, our server presented us with a beautiful book of tipples to choose from—each accompanied by hand-drawn illustrations from Kate Dehler and bite-sized descriptions penned by Zaremba. When we asked for a second menu so that we could browse simultaneously, our server told us that there weren’t enough to go around. As soon as we ordered our first sips—an Aviation for me, a Daiquiri for my date—we had to forfeit the prized book. Zaremba later told me that he’s lost hundreds of the menus to theft over the last couple of months.

Nevertheless, our first tipples were exemplary specimens of his mission. The secret ingredient in the gin-based, floral-scented Aviation is a small-batch cherry liqueur from Leopold Bros. that’s infused with honey and coriander. A by-the-books, ice-cold Daiquiri gets an earthy punch from a splash of aguardiente, a sugar-cane distillate that’s crafted in Ecuador. Those little touches are what make Zaremba's recipes shine.

“Just by changing out the base ingredients you use to build a classic cocktail, you’re going to change the flavor profile of that drink or make it unique,” he says. “When you [drink] it, you may not be able to pinpoint exactly what makes it different, but you like it.”

Next came the Negroni, a recipe that Zaremba says he obsessed over for months. Rather than using regular old Campari, he mixes a combination of bitters to mimic the flavor of vintage Campari. Back in the day, the ubiquitous liquor had more depth and was slightly sweeter. Zaremba’s version of the orange-hued cocktail is soft and harmonious—the kind of thing you want to sip for hours.

Toward the back of the menu, Zaremba introduces guests to his own "classic," a drink he first debuted when he managed Billy Sunday in Logan Square. The pisco-based Don't Speak combines yerba mate-poached pear, lemon, bitter aromatized wine, pear brandy and mint liqueur to create a highly addictive, fall-flavored elixir that has serious staying power.

My date and I may have stuck around until close had there been live music that night. If you’re into that sort of thing (who isn't?), plan your visit later in the week, when acts like Sam “Trump” Harris and Verzatile Band fill the lounge with soulful sounds. Be sure to check Lazy Bird’s website for updated information about who’s playing.

In lieu of live music, we took our chances on the Grasshopper, a classic American quaff that’s usually crafted with mint- and chocolate-flavored liqueurs and heavy cream (it's the kind of thing that’s served in every single Wisconsin supper club). Of course, Zaremba puts his own spin on the staple, remixing the recipe with oat milk, carob syrup, Fernet Branca, mint liqueur and Zucca (an Italian aperitif that’s made with rhubarb). The result is a sophisticated after-dinner drink that tastes like a Thin Mint in liquid form. Oat milk lightens the load, while Fernet Branca adds an herbaceous kick. I haven’t been able to get the drink out of my mind since that night.

Ascending from the basement, our phones buzzed with the text messages and emails we’d missed while we sipping cocktails in Lazy Bird’s service-less lounge. I tucked my phone back in my bag, choosing to ignore the real world and linger in Zaremba’s boozy wonderland for a moment longer.

What to eat: There’s not a morsel of food on this boozy bar menu, so plan on grabbing a bite upstairs at Cira or Cabra, the hotel’s two in-house restaurants.

What to drink: Start with your go-to classic cocktail—whether it’s a margarita or a Negroni—then branch out with something you’ve never heard of. No trip is complete without the show-stopping Grasshopper.

Where to sit: Groups of two will love the pillow-lined banquette opposite the bar, while larger parties can pile into spacious booths on the other side of the room.