Last week, Eater Chicago reported that one of the best craft beer bars in the city, Hopleaf, received an offer to be featured on Spike TV's popular makeover show Bar Rescue. Obviously, the Andersonville institution is not in need of a bar rescue, thank you very much. In case Spike TV needs any help sniffing out their next Chicago bar to rehabilitate, we came up with a few places in Chicago that could benefit from a few changes.

The Cubby Bear Once a storied rock venue that hosted bands such as Phish, Yo La Tengo and the Replacements, the Cubby Bear is now just another shabby sports bar on the Wrigleyville strip. A revamped version of the institution could play up its musical history by booking rising bands and creating a divide between the stage and the hordes of drunk Cubs fans who regularly show up to scream at the televisions that line the walls.

Old Town Social During the day, Old Town Social is a spot to grab a great meal, but at night, the music turns up or games screen on giant TVs, making you wonder whether you're at a club, a dinner spot or a sports bar. This spot could benefit from some focus—right now it's a bit "jack of all trades, master of none."

Fat Cat Although this Uptown bar doesn't necessarily have anything wrong with it, its location means that it's mostly a spot to grab a meal and drink before or after a show at the Riviera or the Aragon. It's a shame, because the beer menu is always solid (boasting drafts from Lakefront Brewing and Three Floyds, among others) while the vibe is relaxed and friendly. Perhaps the Bar Rescue crew could find a way to make this a destination rather than a convenient place for a post-concert beer.

Big City Tap You may know of Big City Tap by its nickname, "Big Shitty," derived from (we surmise) the crowd this bar attracts late at night. A weird dance floor exists opposite the bar, filled with Wrigleyville bros on the prowl for a hookup. We're terrified of what this bar looks like during the day—it's way too skeevy, so a renovation could do wonders.

McFadden's This 4am (or later) bar is a living nightmare for anyone who would like to leave their college days (or, more specifically, nights) behind. There are girls dancing on the bar and specials that are truly terrifying (no self-respecting venue should market drinks and bar grub with the term "Blackout Friday"). We're not sure if this place can be rescued, but the Spike TV gurus are welcome to try. 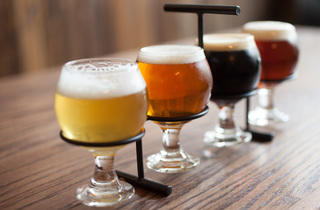