This is not an exaggeration: I’ve eaten fried chicken at more than half the restaurants I’ve reviewed since starting this job three months ago. I’ve also eaten it at places that I’ve covered for other stories, or where I ate it just for fun (sometimes I get to go out to dinner for fun). I’ve eaten it for dinner, lunch and brunch, in sandwiches and as part of fried chicken dinners. We’re clearly in a golden age of fried chicken in Chicago.

So when a restaurant opens that’s centered around fried chicken, they need to do something special to set themselves apart. And Honey Butter Fried Chicken does—the chicken is served with soft, whipped honey butter that you slather all over it. This namesake dish at the new Avondale restaurant debuted at Sunday Dinner Club, the longstanding pop-up dinner series hosted by chefs Christine Cikowski and Josh Kulp, and it was so successful that they decided to open a restaurant around it.

But you should get everything else on the menu instead.

Don’t get me wrong—the chicken is good. If you order the two, four or eight-piece orders of fried chicken, they’ll come out on a brown paper–lined silver tray, deboned (except for the chicken leg, which didn’t appear in our order), with a piece of cornbread and a small dish of honey butter. The chicken is locally sourced and brined with sugar, salt, spices and citrus, then battered and fried, and topped with smoked paprika salt.

It’s good fried chicken, salty and sweet, but something (besides the bones), felt missing. The butter significantly softens the coating, so while the meat is juicy, the exterior lacks a nice crunch. A shake of Co-Op Rum Barrel hot sauce doesn’t add the heat I wanted, just a peppery flavor. In all, it’s an enjoyable dish, just not one I’d rush to have again.

But slide one of those deboned chicken thighs between a buttered bun and top it with candied jalapeno mayo, slaw and pickled onions, and there’s a great interplay of textures and flavors that I’d order again in a heartbeat. Or take that honey butter, add in the hot sauce and some lime, and you have honey butter chili lime sauce for the chicken wings (a special, but available on both of my visits), which are showered with radishes and herbs. They’re meaty and sticky and satisfying, and when one of the very friendly staff members came to clear my tray, it was covered with a heap of crumpled napkins.

But Honey Butter doesn’t just do chicken well—the side dishes are exceptional. Of the three sides on the regular menu—pimento mac n’ cheese, cold roasted sweet potatoes tossed with tangy cilantro and lime vinaigrette, and kale and cabbage slaw with dried pomegranate seeds and a cumin yogurt dressing—you won’t go wrong with any of them. In fact, you should convince someone in your party to order a meal of sides, which comes with three dishes, cornbread and honey butter.

“All macaroni and cheese should be made with rotini,” my dining companion said, as we both eyed the last spirals of pasta, coated with creamy, peppery sauce.

He’s right. And all grits should be as creamy as the garlic grits special, which came topped with a healthy spoonful of sweet tomato chutney.

Like the food, everything about the restaurant feels thoughtful—the hand-washing sink in the dining room; the honey-comb design that pops up everywhere from the walls to the cornbread; even the soda machine, which is filled with Boylan and Goose Island sodas (and a better option than the list of Southern-inspired but boring cocktails like bourbon and grapefruit).

Cikowski makes two desserts, a toffee chocolate chip cookie and a rotating dump cake, which she described to us as “like cobbler, but messy cobbler. You take fruit and top it with butter and cake mix. But we use market fruits and make our own cake mix.”

On my first visit, both items were sold out, but on my second, I ordered the caramel apple dump cake, which I ate on the back patio, where there are tables with red umbrellas, heat lamps and a brick wall covered with leaves changing colors for the season. The warm dessert was sweet, tart and took me straight back to being a kid and eating apple crisp on cold fall nights. We may have reached the point where we have enough fried chicken in Chicago, but we have a long way to go before we have enough desserts this good. 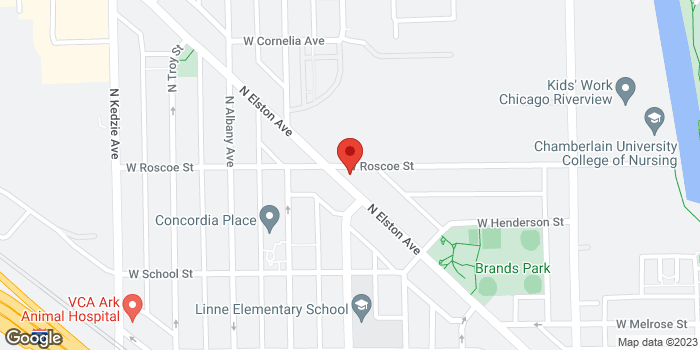