Oooh Wee It Is

Restaurants, Soul and southern American Chatham
Recommended
3 out of 5 stars 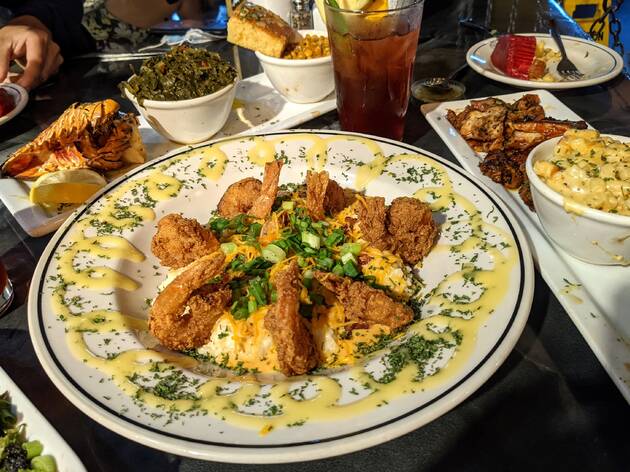 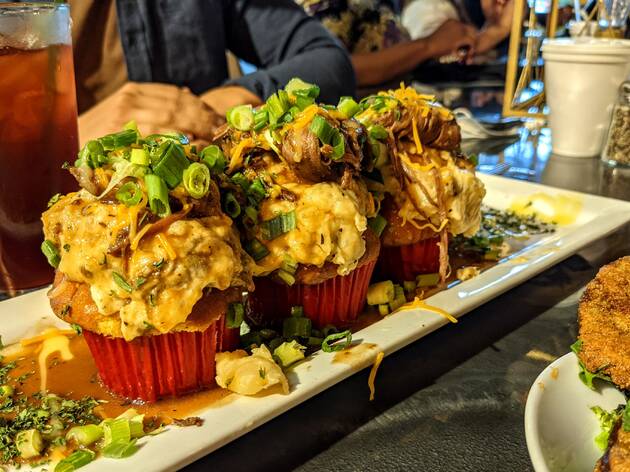 Oooh Wee It Is specializes in over-the-top soul food dishes that are worth waiting in line for.

I’m of two minds about encountering a line in front of a restaurant when you show up for a meal. On the one hand, it can be frustrating to work up an appetite and arrive expecting to eat, only to have to join a waiting list. On the other hand, when folks are willing to queue up for a table, it typically means that the food being served is something worth waiting for. Thankfully, the latter absolutely applies to the Chatham location of Oooh Wee It Is, where plates of delicious soul food are often overflowing—much like the parking lot.

It only took about a half an hour before my party was seated within view of a life-size Iron Man statue (just one of many comic book character replicas lining the dining room) and the restaurant’s cereal bar, which offers more than 75 varieties. You can get a bowl at any time of day, but we skipped the Cap’n Crunch in favor of appetizers like fried green tomatoes and pot roast cupcakes, which tops three cornbread muffins with fluffy mashed potatoes and tender pot roast, and then smothers them with shredded cheese and gravy. They’re as tasty and decadent as they sound, and judging by how many plates of them we saw coming out of the kitchen, they’re very popular.

One could conceivably treat a few appetizers like a complete meal, but you’d be missing out on Oooh Wee It Is’s numerous soul food delicacies. My favorite dish of the night was a large plate of crispy fried shrimp and grits loaded with bacon, scallions and cheese—it was so rich that I had to take long breaks between bites, but I kept coming back to it. I took the same approach with the mac and cheese that’s served as a side, which drenches perfectly-tender noodles in a buttery sauce.

You might be a little shocked by how generous Oooh Wee It Is gets with its side dishes, two of which are included with nearly every entree, served in sizable bowls with a square of cornbread. Along with the mac and cheese, portions of briney mixed greens with smoked turkey or mashed potatoes with rich gravy were highlights of my spread. And they’re delicious (and ample) enough that it was easy to forgive a couple of sub-par entrees, like a grilled lobster tail that was decidedly dry and honey barbecue chicken that was a bit too greasy.

If you’re in the mood for heaping plates of proteins and sides, the Chatham location is worth a visit (and easily accessible via the Dan Ryan), but Oooh Wee It Is will soon expand to the former Angry Pig Tavern location in Wicker Park and an old Dat Donuts storefront in Beverly. The new locations will make it convenient for even more people to try co-owners Mark and Shae Walker’s food—and if they’re able to replicate what’s coming out of the kitchen in Chatham, you can expect to find lines forming in front of the Wicker Park and Beverly locations, too. Heck, I’ll probably be standing in one of them.

The vibe: With bright orange walls, tables outfitted with swinging seats and life-size statues of Deadpool and Batman lining the walls, the mood is playful and family-friendly. Live entertainment like DJs and bands are a regular fixture during the evening.

The food: Ownership accurately describes Oooh Wee It Is’s menu as “soul food with a twist,” packed with everything from pot roast-topped cornbread cupcakes to shrimp and grits loaded with bacon, cheese and scallions. The portions are huge, so order accordingly.

The drinks: There’s no alcohol served here, but you can order one of Oooh Wee It Is’s signature sweet teas, made with honey instead of sugar. Try the Obama Tea (a combo of mango, cherry and pineapple) or a refreshing cucumber mint lemonade.

Time Out tip: Oooh Wee It Is doesn’t take reservations, so you’ll just have to show up early, whether you’re coming for brunch, lunch or dinner. Don’t worry, it’s worth the wait!