Splits in Zagreb: The Museum of Broken Relationships

Jon Bousfield meets the creators of Zagreb’s most intriguing collection: The Museum of Broken Relationships

Say what you like about the romance of travel. The fact is that going on holiday with your sweetheart can quite easily lead to a parting of the ways rather than the deeply meaningful melding of spirits that you initially intended. The trauma of mid-journey meltdown is just one of the themes dealt with by the Museum of Broken Relationships, an idiosyncratic and enlightening journey through human emotions that has become Zagreb’s most compelling attraction since opening to the public in October 2010.

The museum is the brainchild of artist Dražen Grubišić and festival producer Olinka Vištica, themselves a former couple caught unprepared by the aftermath of a love that failed to last. By collecting mementoes that sum up the experience of break-up, the duo have assembled a poignant and unique series of insights into the mysteries of the human heart.

The project began life as an art installation put together for the Croatian Artists’ Union’s annual salon in 2006, when Vištica and Grubišić asked their friends to supply objects that symbolised relationships gone wrong. The fact that the collection was housed in a cargo container parked in the yard outside the salon’s main exhibition space only added to the sense of intrigue.

And it would have remained a one-off conceptual art gesture had it not been for an overwhelming reaction from the public. ‘It provoked an immediate and totally unexpected interest,’ Olinka Vištica explains. ‘We were suddenly receiving a flood of phone calls and emails from people asking how they could donate objects to the collection.’ News reports conveyed the impression that the installation was a real museum rather than a temporary exhibit, a misunderstanding that was only amplified once the story reached the international media. ‘Japanese television was so determined to film a game show inside the museum that we had to recreate it from scratch in a rented gallery space and pretend that it was a permanent institution,’ Vištica recalls.

Invitations from foreign galleries soon followed, and the ‘museum’ became a travelling exhibition, visiting places as diverse as Los Angeles (2015), Taiwan (2014) and Mexico City (2013). At each location members of the public contributed their own mementoes, swelling the museum’s collection further.

The decision to give this collection a permanent home wasn’t initially the most obvious option. ‘Dražen initially thought that a virtual collection accessed via the internet would be more appropriate,’ says Vištica. ‘It came as something of a surprise to discover that it was the physical display itself that people actually wanted to see.’

Now sheltering under the barrel-vaulted ceilings of an 18th-century palace in Zagreb’s Upper Town, the neatly arranged collection is divided into rooms each devoted to an emotional theme; ‘Coming of Age’, ‘The Chips are Down. The game is Up’, ‘A Fine state of affairs’, ‘Private Battles, Global Wars’, ‘ A Labour of Love’, ‘Once Upon a Time... Happily Ever After’, ‘In and Out of Wedlock’, ‘Tomorrow is Another Day.’

‘We wanted a display that reflected different emotions, whether funny, sad or even disturbing,’ Vištica continues. ‘As a museum of the human subconscious it is not so much the number of objects on display that’s important, it’s more to do with the stories they tell and the emotions they tap.’

Much more than just a collection of teddy bears, heart-shaped pillows and sexy underwear, the museum is mind-bogglingly diverse in its exploration of love’s messy aftermath. An electric toaster donated by a jilted American is accompanied by the laconic comment: ‘When I moved out, and across the country, I took the toaster. That'll show you. How are you going to toast anything now?.’

Many exhibits are captioned with the kind of surreal narratives that frequently flow from fraught emotional states. The autobiographical notes accompanying Ex Axe (from Berlin), or ‘Family Guy Edition Uno game (from USA/Australia)’ are riveting short stories that deserve to be read in their entirety.

Exhibits from different countries reveal different approaches to universal experiences. As Vištica reflects, ‘the basic emotions you go through in the aftermath of a break-up are everywhere the same, but the objects we receive seem to say something about the local culture. When we were in Singapore we received a lot of items associated with a gadget-obsessed society, such as digital cameras, MP3 players, that kind of thing. In the Philippines many of the donations came from failed long-distance relationships, so we knew that we were dealing with a country that is marked by migration, with many people spending long periods of time abroad either studying or working’.

Vištica has also noted differences in the kind of objects donated by people of different generations. ‘Letters and postcards are very significant to older people, whereas most people nowadays are dependent on text messages and emails. Hardly anyone writes love letters anymore, and maybe this museum is one place where the traditional love letter should be displayed and celebrated.’

The idea of a broken relationship is by no means limited to failed romance. One Irish visitor to the museum’s exhibition in Kilkenny donated a small wardrobe-shaped shrine, symbolising his break with religion. Elsewhere, a magazine bearing the front-cover visage of Barack Obama suggests rupture with a politician who promised much, but never quite delivered.

The items on display only represent about five per cent of the museum’s holdings. ‘The rest of the donations are carefully documented and stored in our museum depot”, Vištica says. The collection will be periodically refreshed with donations from the museum’s touring exhibition, which continues to rove the world’s cities.

The museum is one of the few visitor attractions in Zagreb’s Upper Town that is constantly busy, a sign that people identify strongly with the process of comfort and catharsis that the display was initially intended to address. While Vištica feels uncomfortable with her role as some kind of agony aunt in museum-curator clothes, she is convinced that the exhibition can provide succour to those whose personal lives have gone dramatically pear-shaped. ‘These days you are expected to be in a relationship. The majority of advertising is directed at couples. If you are single in this society, you are treated as someone to be pitied. But what’s so bad about being single? It’s one of the few periods in your life when you have time to think for yourself. It is frequently very rewarding to be alone. Everybody tries to be smart about relationships, as if they’re on the brink of discovering the right recipe for happiness and their next love affair is going to be perfect. This museum shows things from a different perspective and demonstrates that being single is not so tragic.’

Vištica and Grubišić’s own contribution to the museum is a photograph of a toy rabbit in a desert in the Middle East, accompanied by a caption reading, ‘The bunny was supposed to travel the world but never got further than Iran’. As you stroll back down the hill towards central Zagreb, maybe you should start planning what do with those significant holiday snaps should things take an unexpected turn for the worse.

Museum of Broken Relationships from the blog... 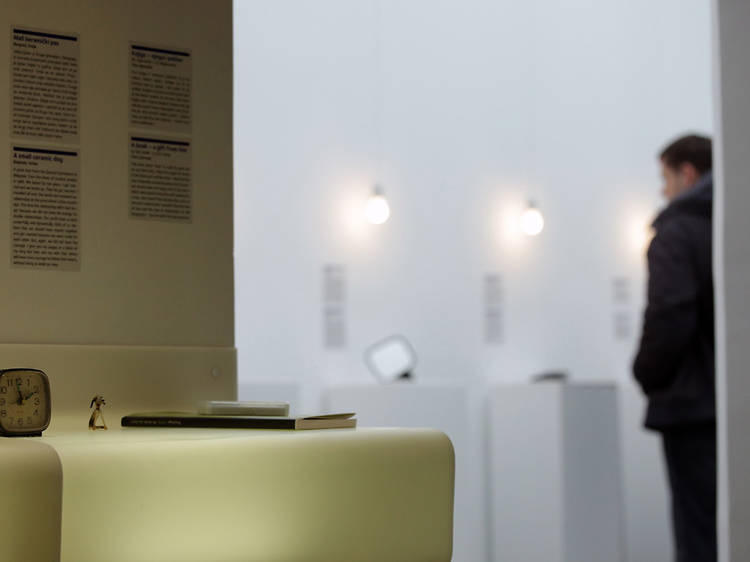 Zagreb’s Museum of Broken Relationships is unique. Well, it was unique - but as of Saturday June 4, this most quirky attraction has seen its very first franchise open in Los Angeles.  Since Olinka Vištica and Dražen Grubišić founded it in 2006, the Museum of Broken Relationships has become one of the Croatian capital’s bucket-list places, capturing the imaginations of the 400 visitors that pass through its doors daily. The concept is strange but simple: the exhibits are relics from relationships that, in one way or another, have ended. It might be a postcard from a long-distance lover, or the favourite outfit of a late mother. They were all submitted by members of the public, they all tell a story about loss – and most of them can make the most cynical visitor shed a silent tear. A forward-thinking tourist called Mr John B. Quinn is behind the museum’s American venture. Quinn, a businessman and co-founder of one of America’s leading attorney offices, visited the museum while holidaying with his family last year. He was inspired: everyone could relate to this museum because everyone, so he told the Wall Street Journal, had experienced some sort of relationship. Within a few days a spark had become a solid plan, and he set to work creating the LA franchise. One year and over a million dollars of invested money later, it opened. As it stands, 300 donated items are on display in a space of roughly 1,000 square metres. We’ve yet to see if it will be a success, but if it’s to

Objects from Museum of broken relationships: a list of reasons to stay

Each week, we feature an exhibit from the collection at the Museum of Broken Relationships. The museum, based in Zagreb (and now LA, too) displays items submitted by members of the public; each tells a personal story about a relationship that has ended. This week's item is a charming list from a besotted soul, convincing their loved one to stay: A list of 10 reasons to stay 3 week relationship, December 2011 London, UK I met her at the beginning of December, not wanting anything serious and definitely not looking for a girlfriend. After constant contact I knew that she was something special, and the thought of her returning to Australia on 29th December was not something I was looking forward to. So I wrote the list, but forgot to include number 11: These feelings don't happen to me often. 10 Reasons to stay in the UK (in no particular order): 1. Alton Towers - is quite good 2. Europe is like 2 mins away, Italy, Portugal, Spain – mmmm... food 3. My hair goes really frizzy in the heat 4. I've heard that Australia is going to be swept away by wind in a couple of months anyway 5. I can't afford to post your (numerous) love letters to Australia and also I would feel less guilty about my carbon footprint if you were a bit more local 6. Lately, I've been finding more money than usual on the streets of London 7. I'll cook for you naked a lot 8. If you'd prefer I could keep my clothes on at all time (save embarrassment) 9. I think that Australia's music scene has never

Objects from Museum of Broken Relationships: a toy caterpillar

Each week, we feature an exhibit from the collection at the Museum of Broken Relationships. The museum, based in Zagreb (and now LA, too) displays items submitted by members of the public; each tells a personal story about a relationship that has ended. This week's item is a semi-amputated toy caterpillar: A caterpillar “TIMUNAKI”   2 year relationship Sarajevo, Bosnia and Herzegovina I had this big, truly big love, a long-distance relationship, Sarajevo – Zagreb. It lasted for 20 months. Of course, we dreamt of a life together and, with that in mind, I bought this huge caterpillar. Every time we would see each other we would tear off one leg. When we ran out of legs to tear, that would be the time to start a life together. But, as is often the case with great loves, the relationship broke and so the caterpillar did not become a complete invalid after all.