Things to do in Split's Diocletian Palace

Some 1,700 years on, the Emperor Diocletian would still recognise his palace – or the shell of it, at least. This vast, rectangular complex fell into disuse in the sixth century, 300 years after its construction as a grand retirement home by the locally born leader of the Imperial Guard. In AD 614 refugees flooded in from nearby Salona (Solin) and locals have been eking out a living in its alcoves and alleyways ever since. Today its two-metre-thick (seven-foot) walls hide any number of shops, bars and businesses.

Wandering aimlessly around the palace is one of Split’s essential experiences. There is no ticket office or protocol – you just stroll in.

Four gates guard its main entrances: Golden, Silver, Iron and Bronze. The latter gives access, through the basement of Diocletian’s old Central Hall, now filled with souvenir and craft stalls, to the Riva.

Amid the chaos, added to over the centuries, two landmarks stand out: the courtyard of Peristil, a major crossing point, and, beside it, the Katedral Sveti Duje. Once the site of Diocletian’s mausoleum, and still guarded by a granite sphinx from ancient Egypt, this octagonal building was converted into a church by the refugees from Salona. Through the Middle Ages, it was given finely carved doors, an equally beautiful pulpit and eventually a belltower offering a panoramic view of the palace. The climb (5kn) can be quite dizzying, so only try it if you have a head for heights.

In the north-east corner of the palace, the Split City Museum is worth visiting for the 15th-century Gothic building itself rather than sundry paintings and weaponry within.

By the time Split was part of the Venetian empire, the population had long since spread outside the palace walls. Split’s role as the main access point for trade in fast boats between Venice and the East – thus avoiding the pirate-infested waters further north – helped the local economy prosper. A short period of French rule saw rapid urban development, such as the landscaping of the waterfront embankment below the arches that once enclosed Diocletian’s living quarters. The Riva, now officially known as the Obala hrvatskog narodnog preporoda, is Split’s main drag. Its recent makeover by Zagreb-based architects 3LHD has been grudgingly accepted by the notoriously conservative locals.

The palace is fringed by two prominent statues by Dalmatian sculptor Ivan Meštrović: one of literary scholar Marko Marulić in Trg braće Radić in the south-west corner, the other of medieval bishop Grgur Ninski by the Golden Gate. On the other side of the road stands the Split Art Gallery. To the east, the Silver Gate was only discovered accidentally after Italian bombs in 1941 shattered a later outer wall. Just beyond, the city’s main market runs daily. Beyond that, past the nearby train and bus stations, and harbour opposite, over the rail tracks is the city beach and modest leisure complex of Bačvice. You can walk from the Roman palace to Bačvice in 15 minutes.

On the western side the palace, the busy fish market is found in a little square alongside Kraj Sv Marije. Adjacent runs Marmontova, another Napoleonic introduction, a smart(ish) pedestrianised avenue, Split’s main shopping street and location of the French Institute. At the top stands the stern edifice of the Croatian National Theatre. 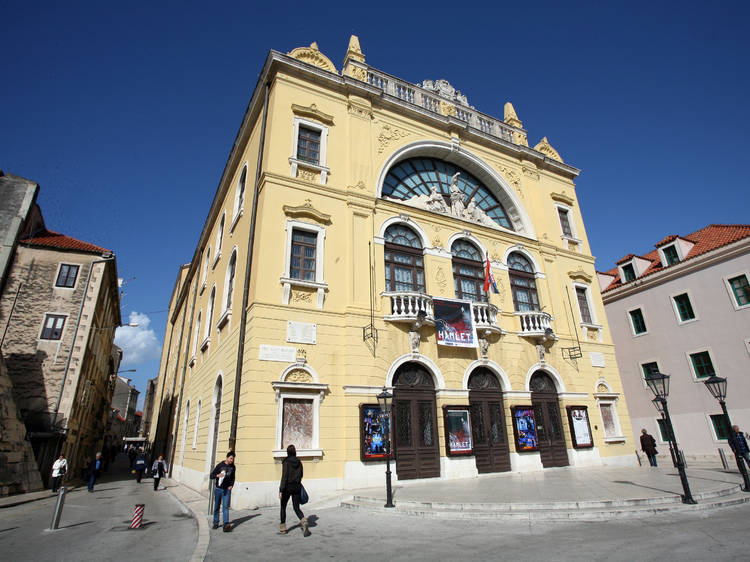 Once the site of Diocletian's mausoleum, and still guarded by a granite sphinx from ancient Egypt, this octagonal building was converted into a church by the refugees from Salona. Through the Middle Ages, it was given finely carved doors, an equally beautiful pulpit and eventually a belltower offering a panoramic view of the palace. The climb (5kn) can be quite dizzying, so only try it if you have a head for heights. The crypt contains rare ecclesiastical treasures dating back to the eighth century.

This museum in the heart of the palace is mostly worth visiting for the 15th-century Gothic building itself rather than for the sundry paintings and weaponry within. You'll also find photographs, documents, maps and old papers but the permanent collection appeals more to historians than offer someone from the general public a rough idea how this fascinating port developed.

The major cultural opening - in fact, re-opening - in town for many years, this attractive collection of art from the Adriatic region includes pieces by leading figures from modern times, most notably Vlaho Bukovac, as well as works as far back as the Renaissance. There is contemporary stuff too, paintings and photographs, to lend the venue kudos.