Known for its dinosaurs and dictators, Brijuni is a surreal collection of islands famous for their association with Tito

The world of the upmarket hideaway with its swanky harbour, spa facilities, bespoke entertainment and private beach is far from being a modern invention. If the Roman villas scattered along the Istrian coast are anything to go by, the idea of the purpose-built holiday paradise has been around for at least 2000 years.

However Istria’s most famous example of a sea-lapped Shangri-La is at Brijuni, the group of islands purchased by Austrian steel magnate Paul Kupelwieser in 1893. Nowadays a national park, the archipelago has at various times in its history served as high-society holiday resort, U-boat base and meeting point for the international political cream. Combining the aura of the European belle-epoque with the slightly menacing mystique of a Bond villain’s lair, Brijuni is imbued with a symbolism that few other places can match.

Paul Kupelwieser’s initial aim was to turn the islands into a family estate comprising vineyards, holiday villas and a small hotel. Only gradually did it dawn on him that Brijuni would make the perfect luxury resort. The pre-World War I tourist industry was largely focused on the health benefits of mild climate, sea air and fragrant local flora: a combination that made Brijuni an ideal destination. However it took a decade and a half of hard work bring the islands up to scratch. Scrub was cleared and replaced by landscaped forest park. Malaria was eliminated by inviting world-famous bacteriologist Robert Koch to come up with a systematic plan to cure the local inhabitants and clear the swamps. Hotels were built, and safari-park pioneer Karl Hagenbeck was called upon to create an open-plan zoo filled with deer, monkeys and exotic birds. It was not the first time that someone had tried to create their own corner of paradise on the shores of the Adriatic sea, but Brijuni was on a scale far bigger than anything attempted before.

The transformation of Brijuni from natural wilderness to leisure-industry wonder was something that Austrian newspapers never tired of talking about; in a way Kupelwieser’s creation of an Adriatic Eden was a metaphor for Austria’s imperial destiny, turning Europe’s semi-civilized southeastern fringes into a zone of refinement and culture. The fact that Kupelwieser employed hundreds of local people to do it allowed the Viennese press to treat him as a symbol of Austrian noblesse oblige, a philanthropist and humanist rather than an oligarchic dreamer eager to control a private world.

Getting to Brijuni usually involved a 13-hour train journey from Vienna to Pula, main port of the Austrian navy, before catching a small steamer to the islands themselves. Filled with huge grey battleships at anchor, Pula harbour made a huge impression on those who passed through. Indeed Pula and Brijuni were like two halves of one big imperial show – the former symbolized Austria’s maritime might, while the latter demonstrated the kind of paradise available to anyone able to enter its economic and cultural elite.

Popular with aristocrats right from the start, Brijuni’s most esteemed regular was Archduke Franz Ferdinand, the heir to the Austrian throne whose assassination at Sarajevo provoked the slide to war in 1914. The Archduke wanted to buy a part of Veli Brijun for himself, but Kupelwieser constantly stalled, aware that the notoriously bossy heir would end up taking over the whole island given half the chance.

Brijuni attracted high aristocracy and company directors, but also a large number of actors, artists and writers – the latter in particular were highly valued by Kupelwieser because of the word-of-mouth publicity they tended to generate. However Brijuni’s island location and intimate scale ensured a rather select public, eager to socialize with their social or intellectual peers. 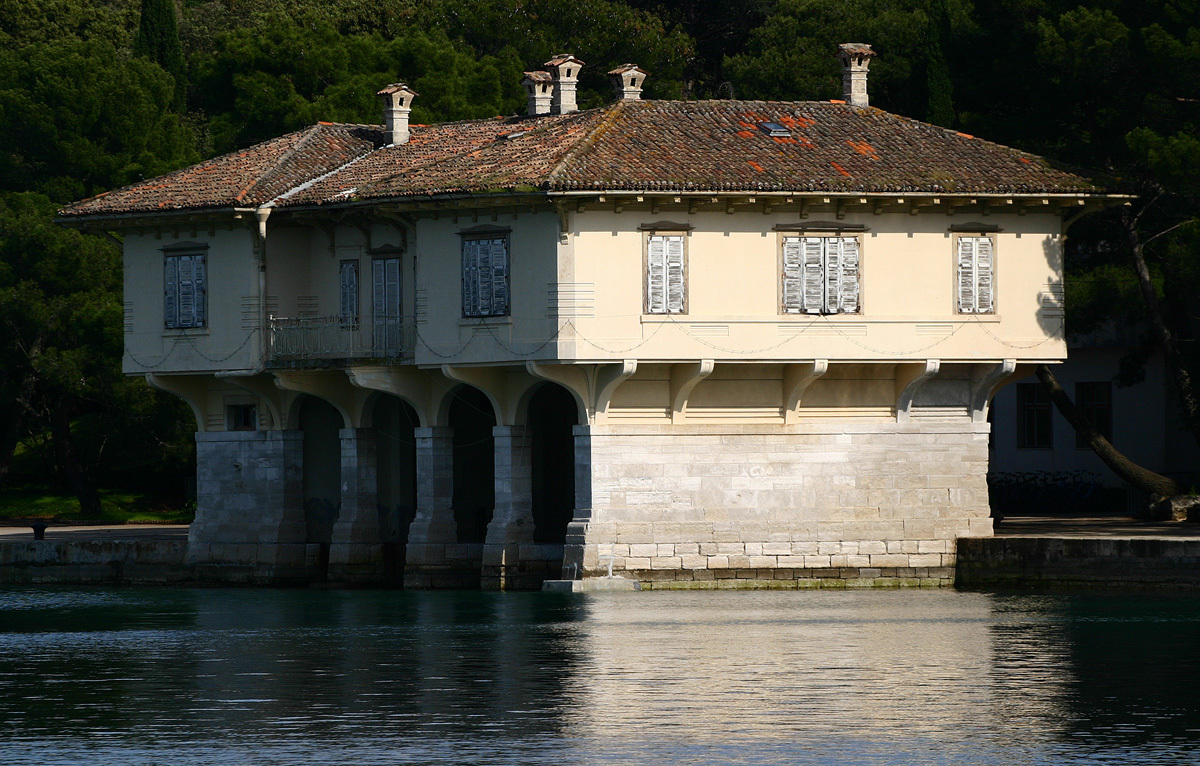 During World War I Brijuni served as the base of Austria’s submarine fleet, with elite marine officers replacing elite tourists in the resort’s hotels and restaurants. However the Austrian Empire was to collapse utterly in the autumn of 1918, and the Brijuni islands were awarded to Italy by post-war peace-makers. Brijuni had to adapt to a new kind of tourist industry in which the Austrian elite had disappeared, replaced by a more cosmopolitan crowd who favoured dance orchestras and cocktails rather than military bands and five-o’clock teas. Kupelwieser’s son Karl invested in golf course and polo stables in an attempt to lure the beau monde. It was an expensive way to rebrand the island, and the international polo crowd was in any case a relatively small group who rarely stayed more than a few days at a time. The British Mediterranean fleet brought their polo teams here every year, but the visitors stayed and ate on their ships, bringing little money into the Kupelwieser coffers.

The post-1929 depression led to falling tourism and rising debts; unable to service the latter, Karl Kupelwieser crept off to an isolated bay and shot himself in 1930. The remaining family members tried to keep the business afloat, eventually selling out to the Italian government in 1936.  A short period of optimism, characterized by rising tourist numbers and fresh investment, was followed by the calamitous year of 1938, when international tensions and fear of war meant that most would-be travellers opted to stay at home. The resort’s Christmas Dinner of December 1938 attracted a grand total of two paying guests. 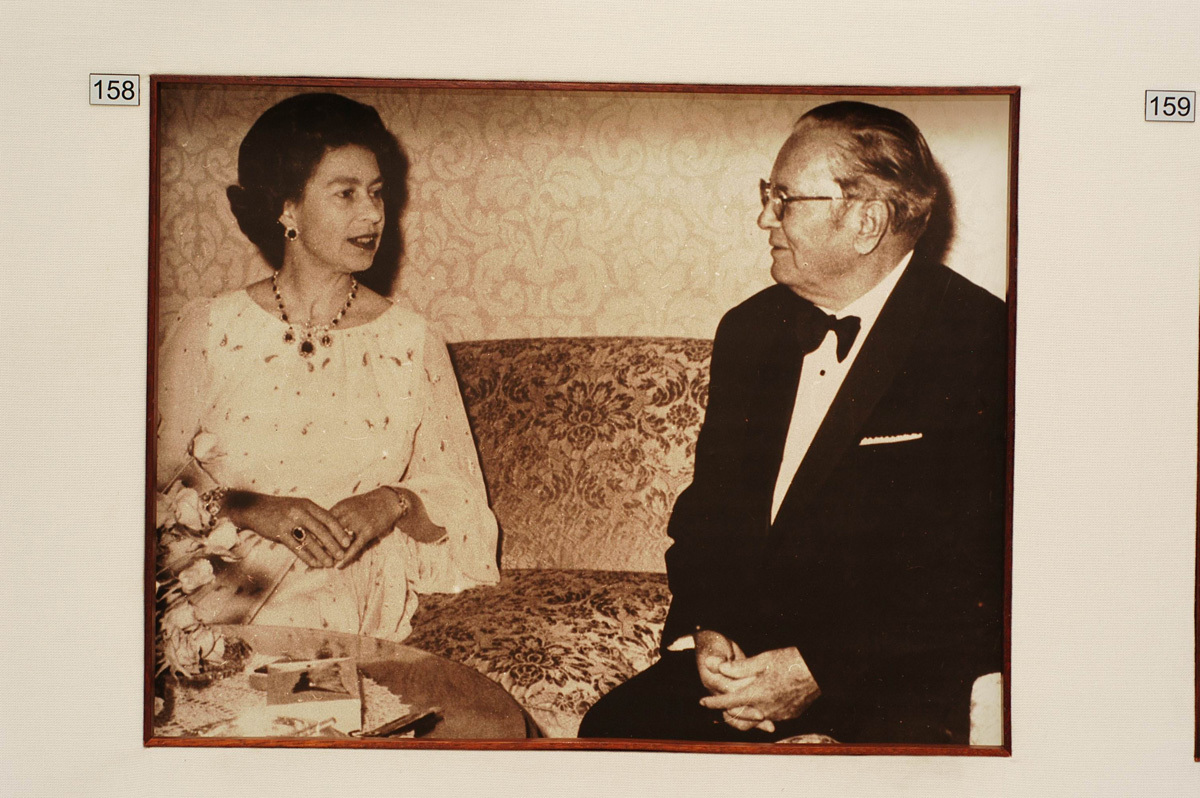 The residual glamour of Brijuni exerted a strong pull on Yugoslavia’s post-war leader Josip Broz Tito, who chose the islands as one of his many private residences in 1947. It was an odd but revealing choice for the communist leader of a supposedly egalitarian society. Staying on Brijuni set Tito apart from his comrades in the party and put them at a profound disadvantage, forcing them into the position of behaving like grateful holiday guests on someone else’s land.

Government officials filled former hotels; and new accommodation was built to accommodate more. Tito lived in the former villa of the Duke of Spoleto before the construction of his official residence, the White Villa, in 1953. However the White Villa was not secluded enough for Tito, who had an additional summer house built on the islet of Vanga. Here he could enjoy a private pebble beach, a fishermen’s saloon decked out in nets and lanterns, a ‘Macedonian room’ full of Balkan woodcarving, and a photography lab where he could indulge his hobby. Vanga’s orchards produced mandarins, which Tito famously distributed to children throughout the country, and also lemons, bananas and kiwi fruit.

Tito spent less time on Vanga after 1977 - allegedly because he didn’t like the way it had been refurnished, but also because he couldn’t stand being on holiday with spouse Jovanka. The Yugoslav supremo spent the summers of 1977, 1978 and 1979 in a marquee set up opposite a former Byzantine fort where archeological excavations were taking place. It was here in 1977 that he hosted fellow canvas enthusiast Muammar Ghadaffi, one of the numerous foreign leaders to beat a path to the island.

The role of Brijuni in international diplomacy was an essential part of its mystique. Soviet strongman Nikita Khruschev hurried here in 1954 in a (largely unsuccessful) attempt to heal Yugoslavia’s rift with Moscow; Indian leader Nehru and Egyptian President Nasser came to sign the Brijuni Declaration, foundation stone of the Non-Aligned Movement, in the same year. Visits by Che Guevara and Yasser Arafat helped to burnish Tito’s revolutionary credentials, while the state visit of Queen Elizabeth II in 1972 confirmed Tito’s position on the A-list of international diplomacy.

Listing all of the international political figures who visited Tito on Brijuni would add up to an A-to-Z of pretty much everyone who held any importance in the years 1954-1980. Providing Brijuni an added veneer of glamour was Tito’s habit of inviting non-political celebrities to the islands – not just Yugoslav artists, writers and opera divas but also many of the international film stars who happened to be making films in Yugoslavia or who had been invited to the film festival in nearby Pula. Sophia Loren, Richard Burton, Liz Taylor and Gina Lollobrigida all stayed in the villas of Veli Brijun, and were frequently invited to Tito’s own summerhouse on Vanga. According to anecdote, Sophia Loren made herself busy in Tito’s kitchen supervising the cooking of pasta; Richard Burton studied the Tito at close quarters in preparation for playing him in the epic war film Sutjeska in 1973.

Regardless of whether it really happened, the idea of international glam-puss Loren cooking up cannelloni for Yugoslavia’s dandy dictator makes for an arresting mental image. Brijuni was the Adriatic’s longest-running soap-opera of prestige and power, with film stars, world leaders and the communist hierarchy mingling together in the popular imagination, as if they had all been somehow invited to the same cocktail party. There was never any other island like it, and it is unlikely there will ever be again.