The 12 best places to stay on the French Riviera

Looking for the best places to stay on the French Riviera? These are the most picturesque Côte d’Azur resorts according to us

Because of its balmy climate – which generally guarantees around 300 sunshine days per year –  the French Riviera was initially a place of recuperation for Brits with tuberculosis. When a railway was built linking the Côte d’Azur with the rest of Europe in the late nineteenth century, however, the humble seaside resort became a magnet for millionaires, movie stars and other celebrity jetsetters.

Humorously dubbed ‘a sunny place for shady people’ by writer William Somerset Maugham, this strip of coastline stretching from Menton to Saint-Tropez has attracted celebrities ranging from Queen Victoria and Ernest Hemingway to Coco Chanel and Pablo Picasso. And these days, not much has changed – this glitzy string of chic conurbations, scattered like gold-plated confetti along the Mediterranean coastline, still draws modern-day royals the Beckhams and the Kardashians.

Luckily, you don’t need to be a millionaire to have fun on France’s most exclusive coast – just step away from the seafront and you’ll find budget hotels and no-frills restaurants in spades. Explore our selection of the absolute best cities and towns to visit on the French Riviera and you’ll discover that France’s most elite beach haven is actually very accessible. Allez, vite!

RECOMMENDED: Full guide to the best things to do in France

Best places to stay on the French Riviera 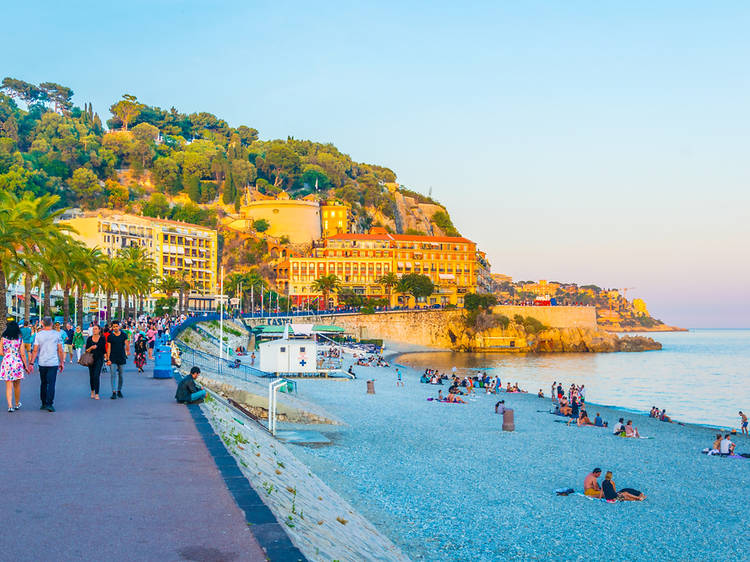 The French Riviera’s sun-splashed cosmopolitan capital and France’s fifth-largest city is often hailed as the birthplace of tourism on the Côte d’Azur. Easily the Riviera’s most vibrant nightlife spot, elegant Nice has plenty of other charms, ranging from sunset views along the Promenade des Anglais and baroque and Belle Époque buildings around the Garibaldi and Massena squares, to the peerless Chagall and Matisse museums, along with some of the region’s most scenic strips of boutique and café-lined sand.

Discover the best things to do in Nice 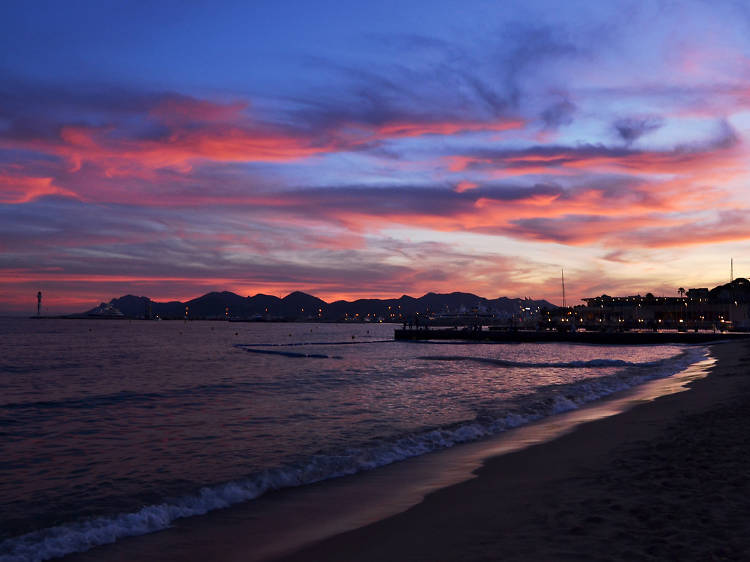 Socialites have been flocking to the resort’s renowned film festival since 1946 – and come May it’s still as busy as ever. Although this is the best time for star-spotting, there are always plenty of celebrities hanging around Cannes: you’ll spot them taking selfies along the beautiful Promenade de la Croisette, flashing platinum credit cards as they shop in designer boutiques, or slipping out of their palatial hotels to chill incognito in one of the Lérins Islands’ hidden coves. 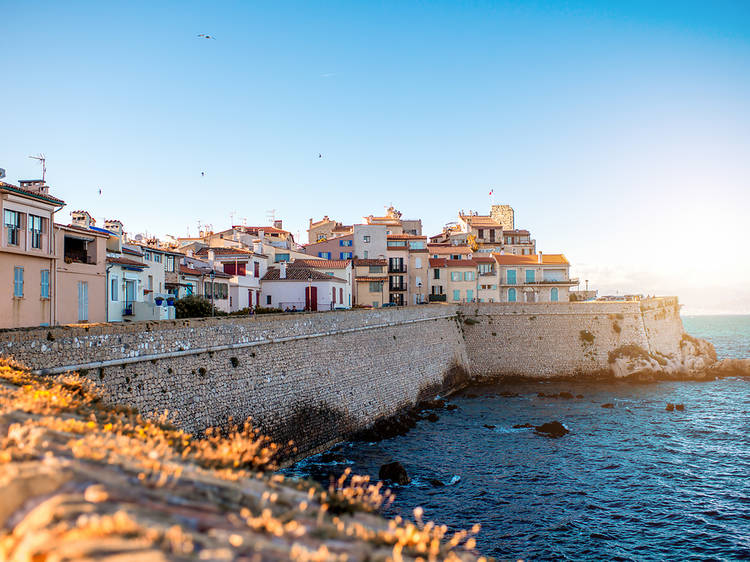 Jewel in the Riviera’s glittering crown, labyrinthine Antibes’s sixteenth-century rampart-enclosed old town and the densely forested Cap d’Antibes peninsula are home to some of region’s most luxurious villas. You’ll also find some of the Riviera’s swankiest yachts in its elegant marina (the Med’s largest). But the town itself, packed as it is with shops and art galleries, is relatively accessible to all. Can’t-miss sights include the Picasso Museum, and Fort Carré, where Napoleon Bonaparte was once held prisoner. 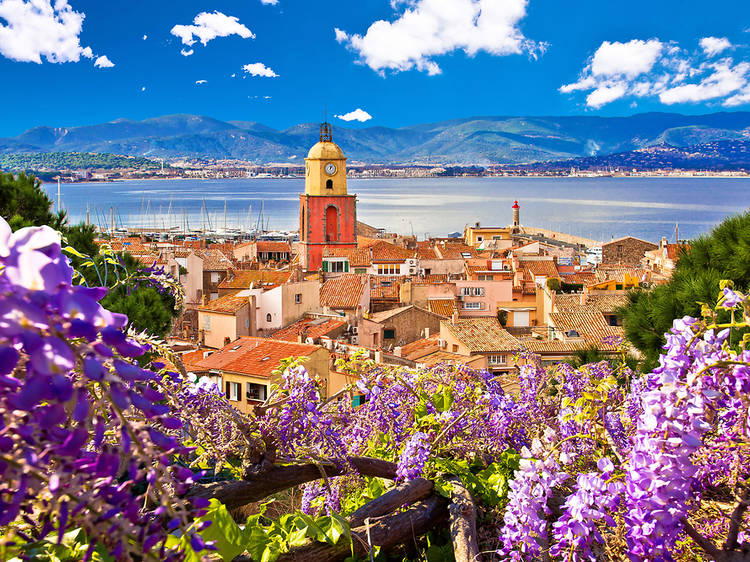 This town has Brigitte Bardot to thank for its reputation as a glitzy tourist magnet. When she frolicked on its beaches in the 1950s, Saint-Tropez was just a tiny fishing village. Now it draws a wealthy bohemian crowd, with everyone who’s anyone coming here to strip down on ‘clothing optional’ beaches, buy chic beachwear and go clubbing. St Trop’, as it’s fondly known by habitués, also has a world-class art scene and a string of Michelin-starred restaurants. 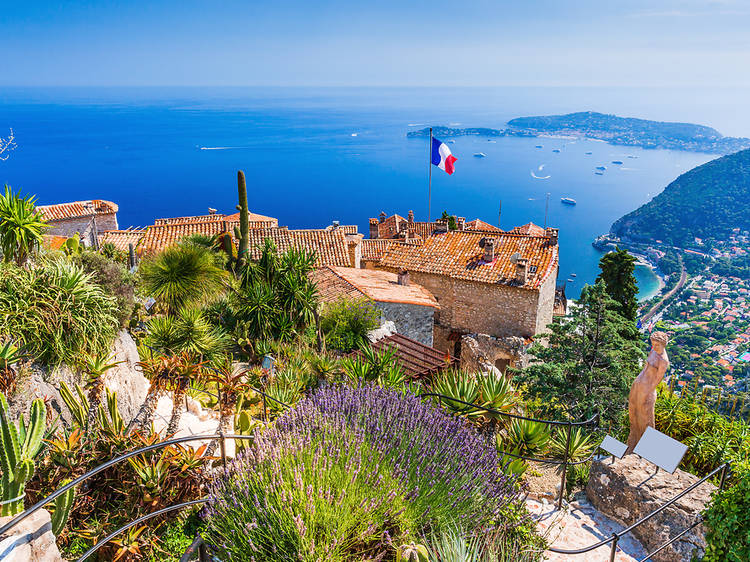 High on its rocky perch, this picturesque town with its winding alleys and stocky stone houses is best explored via the Nietzsche path (named for the German philosopher who once lived here). The steep hike along this path, which links the town to its lofty summit, is worth it to admire the medieval fortress that featured in Hitchcock classic To Catch a Thief. From the cactus-studded Jardin Exotique gardens next door, you can also lap up spectacular vistas of Saint-Tropez’s glittering gulf. 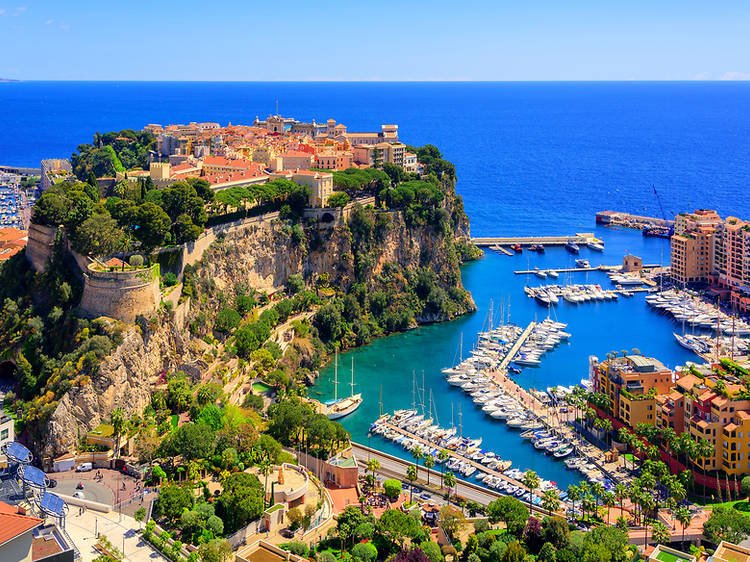 Although not strictly on the Riviera (because it’s a separate country), magnificent Monaco still deserves a mention. This two-square-kilometre principality on the French-Italian border has glitzy casinos, a superb marine museum and its very own opera house. And if that’s not enough, it’s also home to one of the world’s most prestigious car races: the Monaco Grand Prix, which runs through the resort’s diminutive streets every year in May.

Discover the best things to do in Monaco 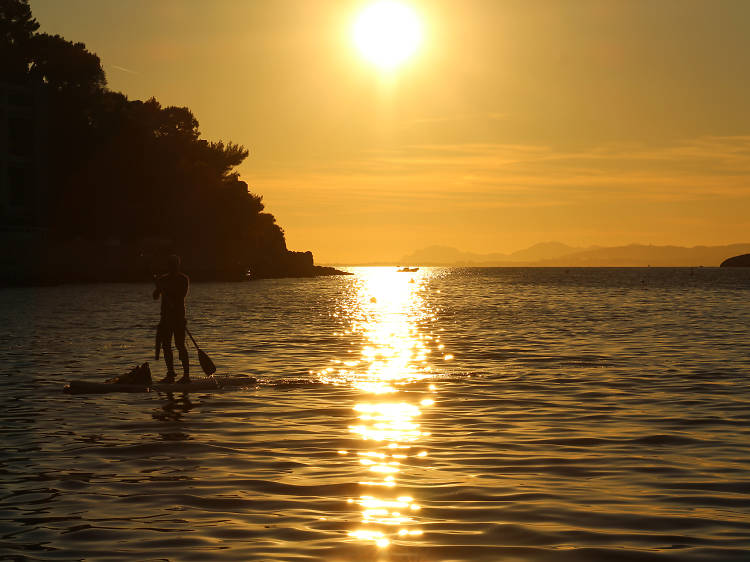 Strewn with ornate Belle Époque villas and magnificent lush gardens, elusive and exclusive Saint-Jean-Cap-Ferrat is one of the Riviera’s most picturesque spots. Once favoured by the European aristocracy and now (slightly) democratised, this pretty peninsula is home to countless striking bits of architecture. Our pick of the bunch is the Villa Île-de-France which is decorated with more than 5,000 works of art and other items brought back by owner baroness Béatrice Ephrussi de Rothschild from her travels around the world. 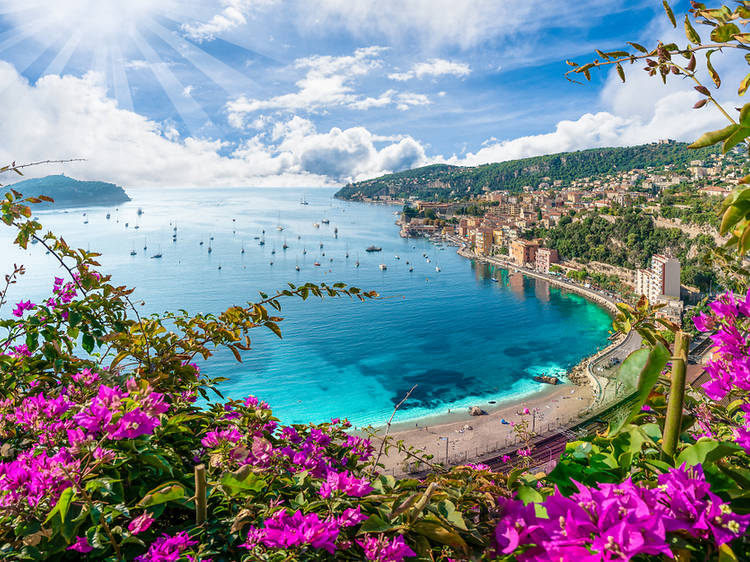 Set between turquoise seas and a backdrop of wood-clad cliffs, Villefranche-sur-Mer’s ochre houses overlook one of the world’s most beautiful bays. And if you think the Jean Cocteau-decorated Saint-Pierre chapel and Villefranche’s charming tangle of cobbled streets look familiar, they probably do: this breathtaking town has played host to dozens of films including ‘Never Say Never Again’ with Sean Connery and ‘The Jewel of the Nile’ with Michael Douglas. 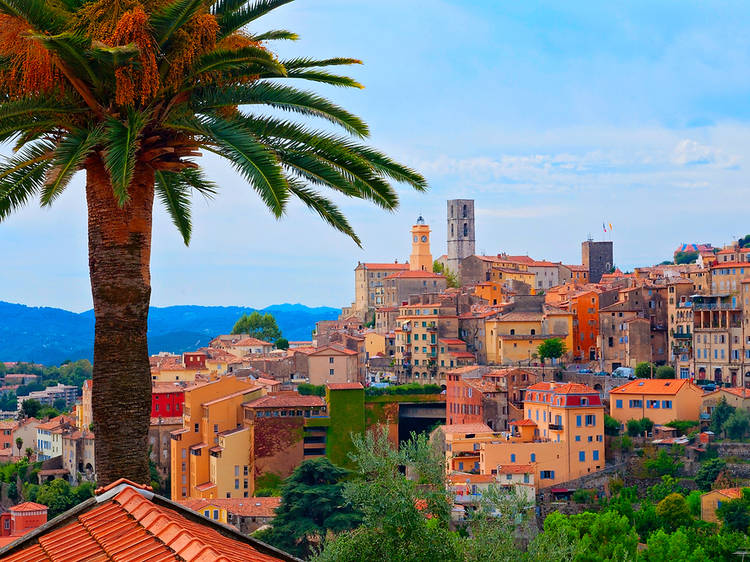 A short drive from the bustling coast, the French Riviera’s perfume capital was originally a centre for (far less pleasant-smelling) leather tanneries, until someone had the bright idea of selling scented gloves here sometime in the seventeenth century. Nowadays this pretty town, with its jumble of medieval and Renaissance buildings surrounded by endless fields of purple lavender, is home to no less than 30 perfume factories. What’s more, all of the main ones – from Galimard to Molinard and Fragonard – offer free tours of their sweet-scented workshops. 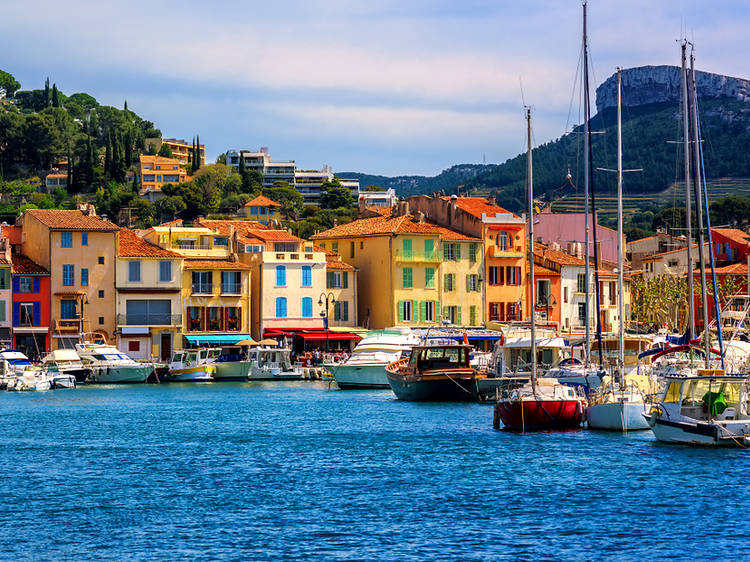 Renowned for its calanques, those narrow limestone coves backed by sheer cliffs of which the most famous (and most difficult to get to) is Calanque d’En-Vau, Cassis is a charming, unspoilt seaside town. Among its must-see sights are the resort’s winding streets, lined with some of the Riviera’s quirkiest boutiques, and the pretty harbour which bobs with vividly painted fishing boats called pointus and is backed by France’s tallest cliff, the 394-metre Cap Canaille. 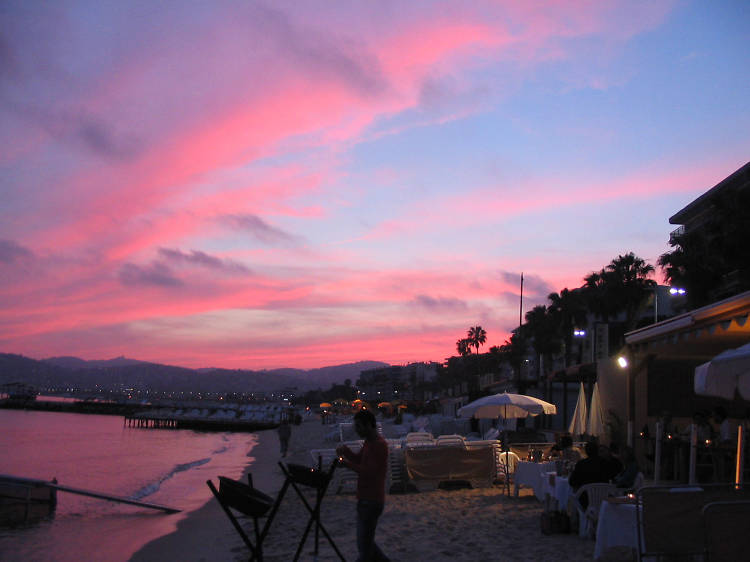 The main attraction at this star-studded resort is the art deco Hôtel Belles Rives where F. Scott Fitzgerald hosted his glamorous parties attended by the likes of Rudolph Valentino, Hemingway and American tycoon Frank Jay Gould, which later inspired him to write ‘The Great Gatsby’. But this elegant town doesn’t just live in the past: Juan-les-Pins’s Jazz à Juan festival in July, along with some of the Riviera’s best beaches, make it a magnet for well-heeled tourists even today. 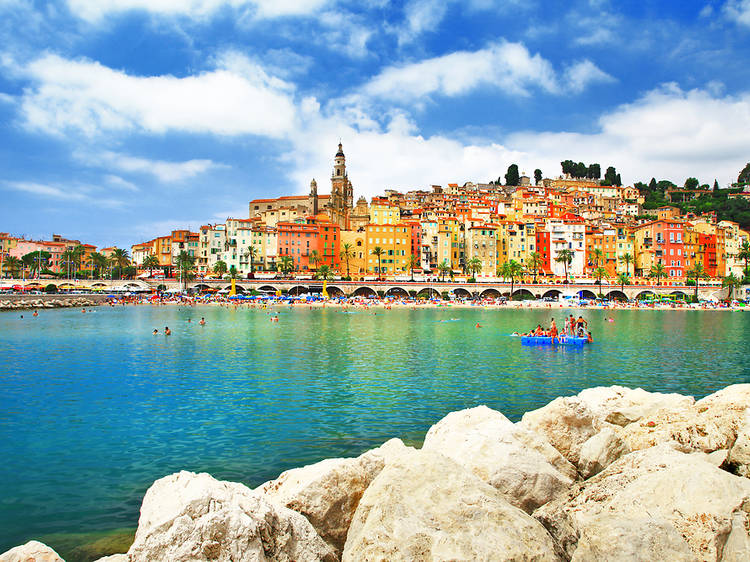 Giving on to sparkling emerald seas between Monaco and the Italian border, and framed by the mighty Alpes-Maritimes mountains, lush Menton is a picturesque town famed for its subtropical microclimate and astoundingly beautiful gardens. This is where the citron de Menton is from: you can see some in Menton’s vast La Citronneraie lemon grove or during La Fête du Citron festival in spring. Nature lovers can also get their kick at the sweet-scented, petal-strewn Fontana Rosa Garden. 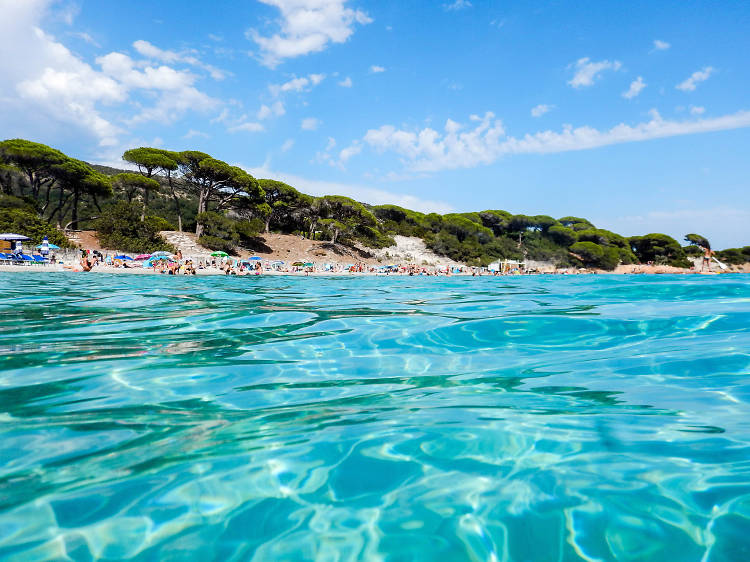 The 10 best beaches in France

It might be better known for pioneering gastronomy and world-class museums – plus that ineffable eyeful of a tower. But fabulous France is also a beach lover’s paradise, from the sparkling seas of Napoleon’s birthplace Corsica to the French Riviera’s glitzy, boutique-lined bays.