The 10 best things to do in Hamburg right now

Want to do Germany’s second city like a local? From cocktail bars to flea markets, these are the best things to do in Hamburg

With more than 50 museums, 45 theatres and around 100 music venues and clubs, Hamburg has quietly grown into a cultural mecca almost on a par with Berlin. In January 2017 the city even celebrated the opening of one of the largest and most acoustically advanced concert halls in the world, the Elbphilharmonie – a major coup. But beyond its newfound cultural pre-eminence, a rich maritime history and proximity to the North Sea also make Germany’s second city and biggest port a (sea)foodie haven, with breathtaking harbour views at pretty much every turn. From a stroll down the infamous Reeperbahn Red Light District to the world’s biggest model railway to a gin basil smash at a bar that claims to have invented it, these are the very best things to do in Hamburg.

Done something on this list and loved it? Share it with the hashtag #TimeOutDoList and tag @TimeOutEverywhere. You can also find out more about how Time Out selects the very best things to do all over the world.

Best things to do in Hamburg 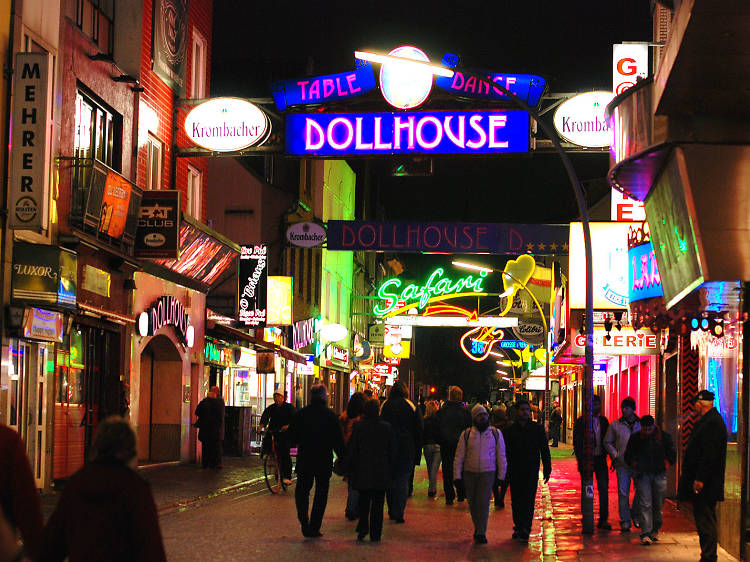 Hamburg’s ‘most sinful mile’ on the Reeperbahn is one of the city’s main attractions. However, with lively restaurants, bars and clubs mixed in with all the strip clubs, sex shops and brothels, this part of St Pauli is also one of the buzziest areas for eating, drinking and live music, too. Prostitutes roam openly on the infamous Herbertstrasse, where women are forbidden (though word has it some have slipped through with the right disguise). And around Christmas, you’ll find the city’s naughtiest Christmas market, the Santa Pauli Market, which features adult-only strip shows, live music, and an adult tent housing some rather sexy holiday gifts. Gentrification means the erotic playground part of the Reeperbahn might not be around much longer – see it while you can.

Don’t expect nature here; these boat tours are more about seeing what makes Germany’s largest port tick. With 9,000 ship calls per year, almost 300 berths and 27 miles of wharf for seagoing vessels, the Port of Hamburg is a bustling sea superhighway. On a barge tour such as the Maritime Circle line, you’ll get closer to all the container ship action. Alternatively, you could flee the constraints of land with a floating techno party on the Love Boat. If speed is your thing, try RIB Piraten, the only speedboat operator allowed inside Hamburg Harbour. On the last stretch of this tour, you’ll reach top speeds on a rigid inflatable boat that skims the waves at 60 miles an hour. 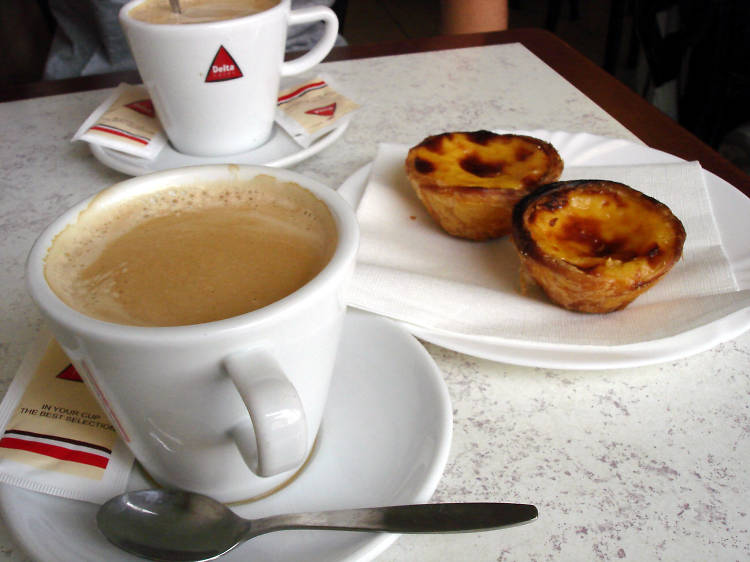 Oddly enough – with the obvious exception of Portugal – Hamburg is one of few places in the world where you can really live like the Portuguese do. Spanish and Portuguese immigrants have settled in the area around Ditmar-Koel-Strasse in the Neustadt district since the ’60s and ’70s, and this scenic area is where the club kids go after a night out for a galão (espresso with steamed milk) and pastel de nata (a custard tart). Close to the harbour, it’s also where to head to satisfy a craving for fresh seafood. Try a bowl of steamed mussels from one of dozens of restaurants offering the best Mediterranean food in the city. 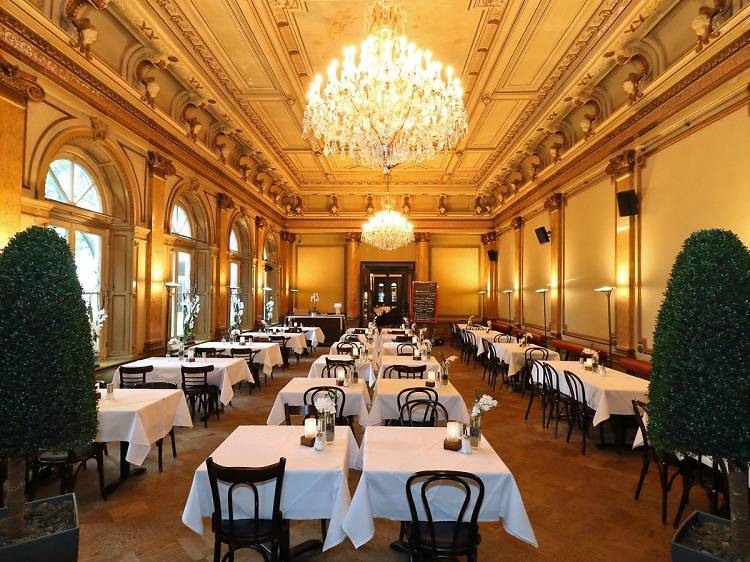 Literaturhauscafé is located in a beautiful old building that dates back to 1839, but it wasn’t always this way. It previously served as a dance school, a home for girls and was then left to deteriorate for years. Thankfully, in 1985 an anonymous philanthropist funded its restoration and now glittering chandeliers hang from intricately stuccoed ceilings above rows of gleaming white tablecloths. Literaturhauscafé may not be the cheapest meal out, but it’s perfect for a special occasion or if you just want to treat yourself. Their menu consists of fresh, seasonal, regional dishes. 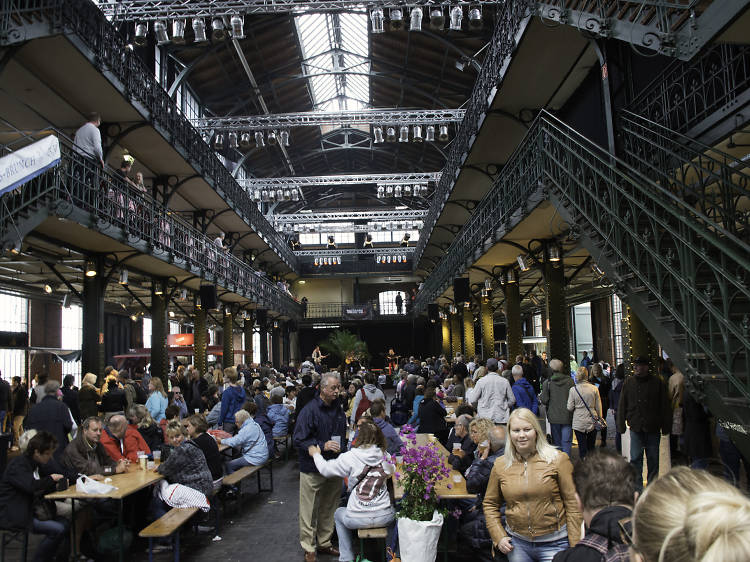 ‘Fischmarkt’ is a somewhat misleading name. OK, so you’ll definitely find fresh fish and seafood here, but there’s also an array of bric-à-brac, flowers, fruit and veg, meat and clothing. All sorts of things have been traded at Fischmarkt since 1703, so it’s well established and very busy when it opens every Sunday morning. If you’re looking for something ready-prepared, rather than just fresh ingredients, you can also get snacks like shrimp rolls here or pop into the adjacent fish auction hall for brunch and a performance from a live jazz or skiffle band. 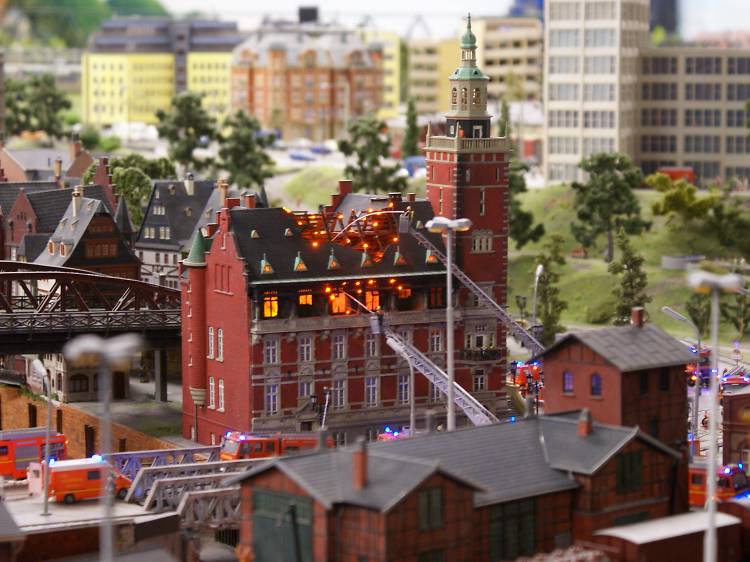 Whether you have kids or are just a big kid yourself, Miniatur Wunderland is a must-visit. Teeny-tiny narratives unfold all over this miniature world, so keep a beady eye out for what’s going on. Allow at least three hours to see the whole thing – and don’t get too frustrated by the crowds of onlookers hustling for prime position. Miniatur Wunderland is home to the largest model railway in the world (at 50,000 feet), which runs through various model areas, including Hamburg, the United States, Scandinavia, Knuffingen Airport and Venice. Book in advance to skip the queues and, if it’s not too busy, you can even bring your dog along. 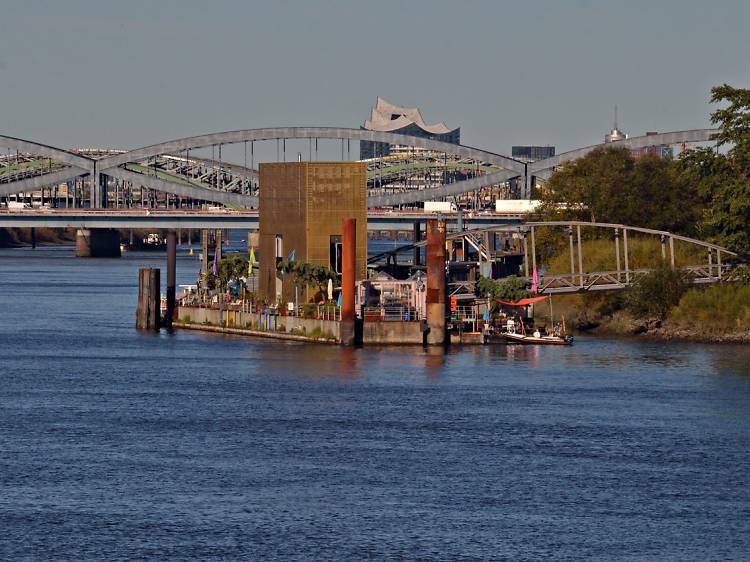 A place of pilgrimage for both creative types and the boating community, Entenwerder1 is a sun-splashed café that looks directly on to the Elbe River in the Rothenburgsort district. From picnic-style seating outside you can watch the boats go by – or stop, as a docking point makes this an aquatic destination for hungry locals. Inside seating, communal-style, is in two buildings; a boldly coloured wall installation in one and the perforated steel façade on the other make both architecturally appealing. We recommend the fish cakes and the fresh, homemade baked goods. 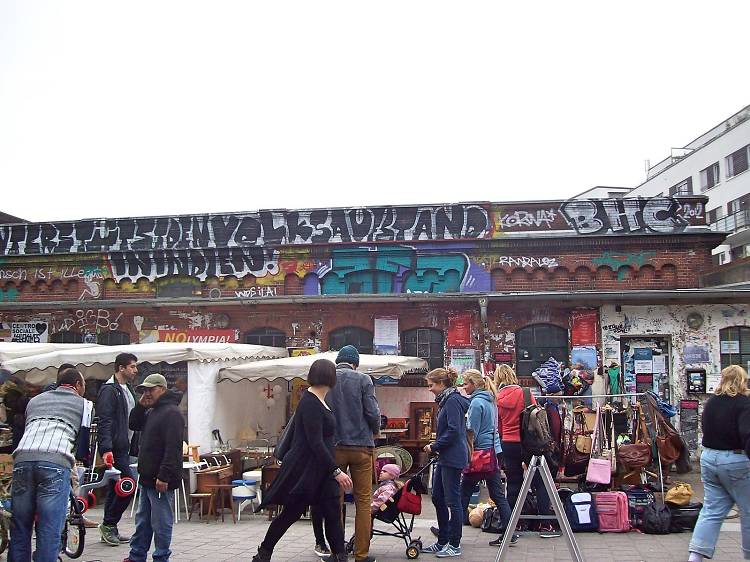 For the best retro or vintage souvenirs, head to Flohschanze, which many consider the city’s best flea market. Every Saturday, hundreds of vendors hold court at the market, which is located in the hip Schanzenviertel district near an old slaughterhouse and has an excellent view of the FC St Pauli football stadium. You can find just about everything here, from mid-century light fixtures and brass candle sticks to used bicycles, clothes, furniture and even car batteries. Though you won’t find brand new items from local retailers, that’s a good thing; it’s a flea market in the truest sense, meaning bargains are aplenty. 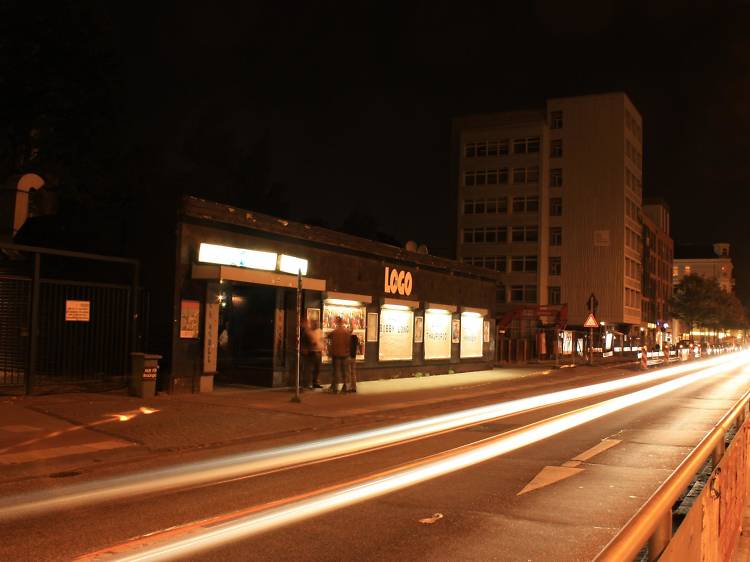 This live music club, which proudly calls itself ‘Hamburg’s loudest sauna’, has been drawing a wide array of bands and musicians since 1974 – making it one of the city’s oldest and most beloved music institutions. The venue was built as a furniture store after Second World War, and was later transformed into a student restaurant with cheap food and the occasional concert. Slowly, the concerts took over. The 40 years of Das Logo’s existence have not been easy; financial dire straits have led to near-closure several times over the years. However, the band plays on, with both local and international talent continuing to deliver extraordinary nights out. The 450-capacity club often sells out – so book in advance. 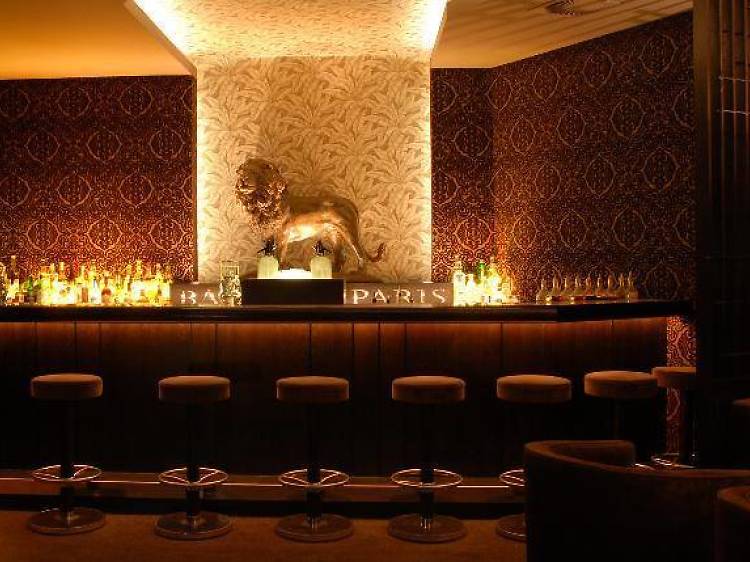 A green-tinted muddle of basil, gin, lemon juice and sugar, the gin basil smash is a fragrant, summery drink found in bars worldwide these days. Le Lion makes the case that they invented it – and this claim is boldly stated on the sign outside the speakeasy-style cocktail bar which you’ll find brimming with lion accents. True or not, Le Lion is the place to find a very good cocktail in a sultry locale. Head to one of the upholstered bar stools on the second level, and you’ll have an excellent viewpoint from which to watch the well-heeled crowd. Small plates of food are also on hand, mostly salami and cheeses. Reservations are recommended; ring the bell to enter. 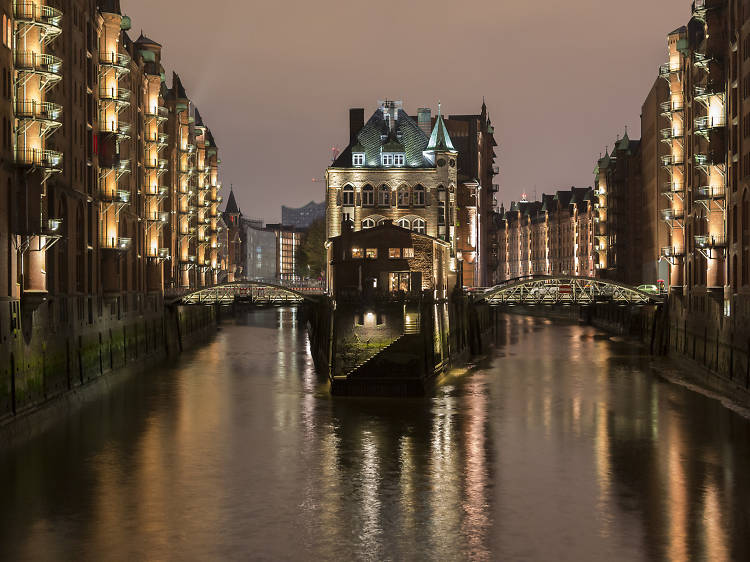 The 10 best attractions in Hamburg

Known as a harbour city, millionaire’s metropolis, media capital and an anarchist hub, Germany’s second-largest city is an intoxicating mix. A place where the North Sea winds carry prosperous Hanseatic trading history, as much as bawdy nightlife and a long tradition of leftist dissent.