After eating your way through our list of the best burgers in Las Vegas, the best hot dogs in Las Vegas and the best Chinese food in Las Vegas, we suggest you turn your attention to the very best tacos in Las Vegas. Both traditional and more creative versions of the Mexican favorite are being served in local restaurants, satisfying palates all over the city. From the tacos huevos at Kitchen Table to the tacos de cochinita at Las Cazuelas, it’s time to devour these fish, meat and veggie-filled delicacies. 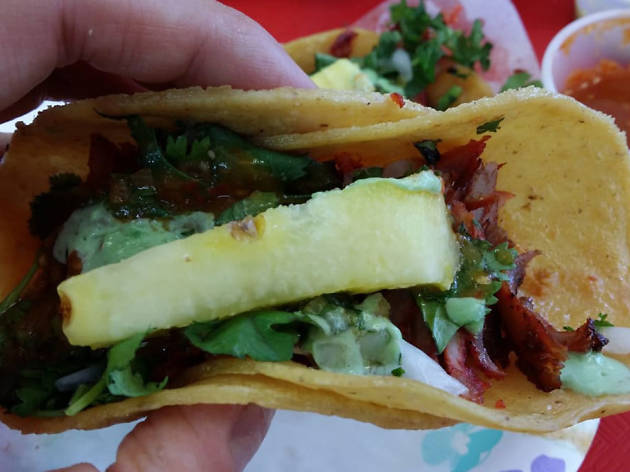 There’s a reason this Tijuana chain has populated Las Vegas with multiple branches, often with lines out the door. They do Mexican street tacos and they do them right. The adobada—marinated pork—roasts on a spit, sucking in all the flavors of its marinade. As the taco master hacks the meat off the spit to grill it, ask him to grill some pineapple along with it, which gives the taco a complimentary sweetness. The tortillas get some crispness on the grill and avocado crema brings it all together. It’s so simple and oh-so delicious. 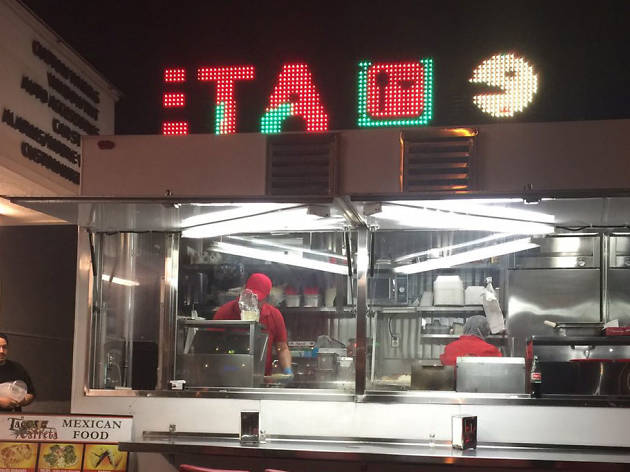 There is something distinctly Vegas about having one of the best taco trucks in the city located right in the center of Chinatown, in the parking lot of a tire shop… next to a strip club. The taco dorado is a fried potato taco that somehow keeps the potato center soft and the outer shell crispy. Topped with lettuce, cotija cheese and salsa, it’s an “I dare you to just eat one” type of taco. 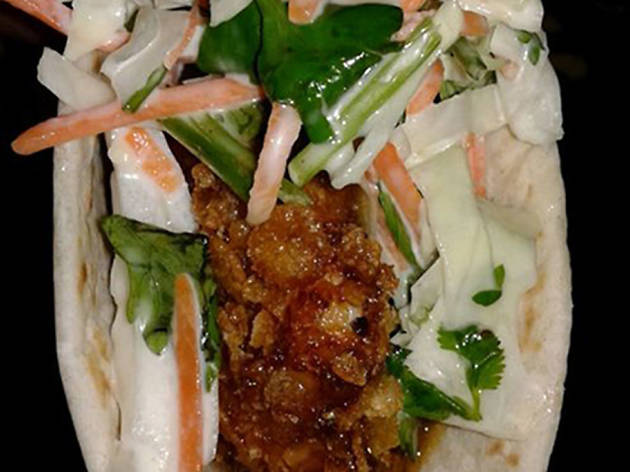 Chef Mike Minor is a big-time Las Vegas Strip chef, which is why his super TruckU doesn’t make it out as often as locals would like for it to. But, when the truck comes to town, it is always an event. Minor specializes in his own amalgam of Mexican and California comfort food. His fried chicken taco is ridiculously good as buttermilk fried chicken is coated in corn flakes and cooked in duck fat to get its singular taste. It’s finished with chipotle BBQ sauce, jalracha sauce and creamy coleslaw. Think of it as comfort food elevated to maximum foodie heights. 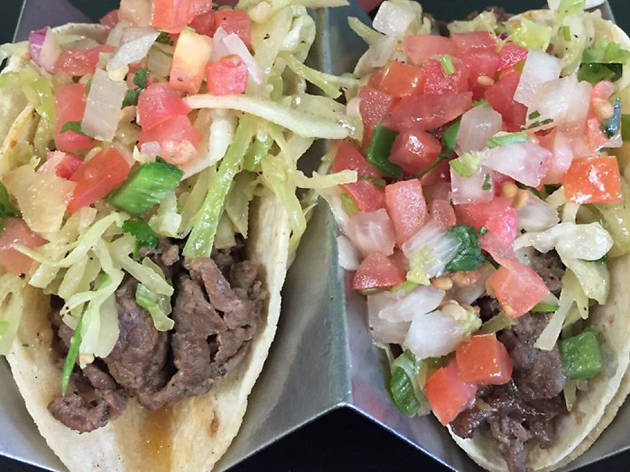 After the Korean taco took off in Los Angeles, it made its way up to Las Vegas at Komex Fusion. The combination of Mexican and Korean flavors is so perfect that, upon tasting the Korean taco, diners wondered why nobody thought of the combo sooner. Try bulgogi style beef, pork belly or tofu on a corn tortilla. It’s topped with Komex slaw, reinforcing those Korean flavors, and fresh pico de gallo, bumping up the Mexican profile. Yum. 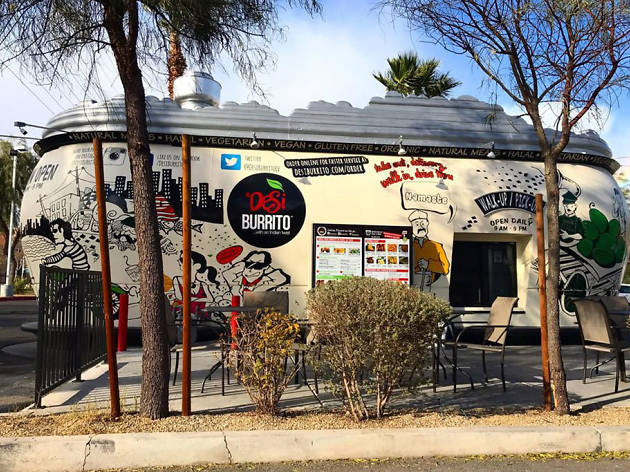 After the Korean taco boom, it was only a matter of time for other cultures to create their own taco mashups. Case in point: The delicacies served by Desi Burrito, a makeshift Indian joint. Paneer is a delectable Indian cheese that boasts both its own flavor and picks up the taste of whatever it is being cooked with it. This chili sauce offers the heat and depth of depth of flavor soaked up from ingredients that include ginger, garlic and multiple types of chilies. It’s an excellent way to knock out two types of cravings at once. 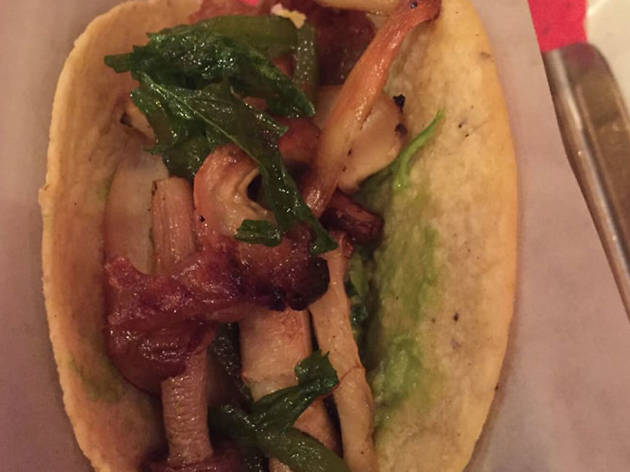 Celebrity chef José Andrés is known for both experimenting with his cuisine and making delicious traditional versions of classic dishes. China Poblano, one of his restaurants, serves Mexican and Chinese food but, interestingly enough, the two styles remain distinct, never overwhelming the same dish. The hongos tacos are Andrés's take on the Mexican street food. Hongos are sautéed mushrooms, meaty and full of flavor. They are complemented by rajas or roasted poblano chile strips. The taco is then topped off with guacamole. As with his native Spanish cuisine, Andrés is interested in coaxing out as much flavor as he can from this taco. 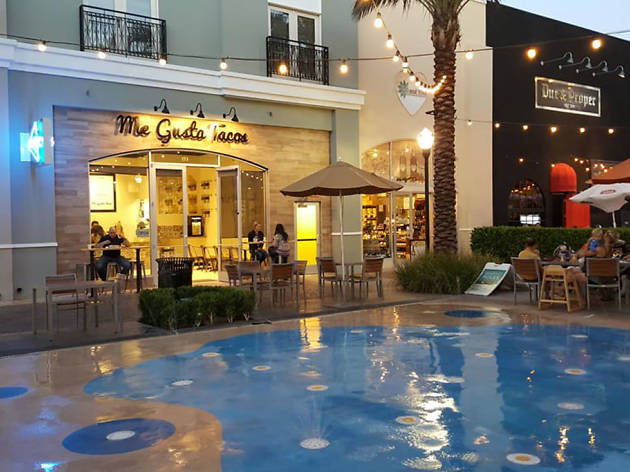 The international taco tour makes its way over to Vietnam with this take on the iconic Vietnamese sandwich, the banh mi. This funky taco joint at the District in Green Valley replaces the traditional French roll of the banh mi with a tortilla. Pork belly is a fatty and salty protein, a perfect dance partner for the acidic Vietnamese slaw—daikon, carrots and cilantro—that tops it. 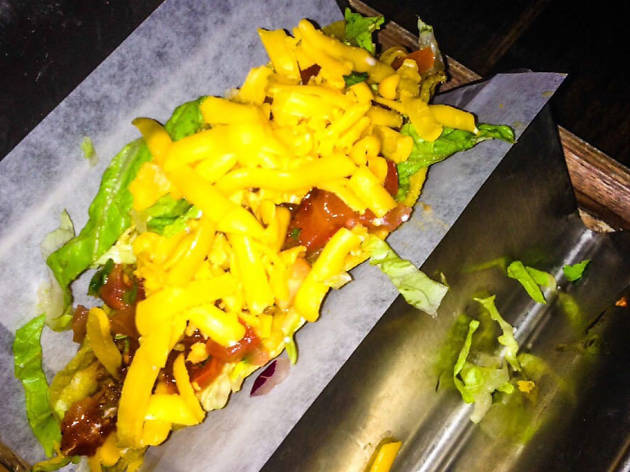 Part taco shop, part nightclub, this hot spot just off the Strip has a smooth vibe and great food. While serving a variety of excellent tacos, the crunchy might be one of the most delicious options on the menu. Shredded cheddar cheese, lettuce, pico de gallo, sour cream and hot sauce cover the filling. The interior shines with either ground beef or chicken plus mashed potatoes. Yes, it’s better than most family taco nights many of us remember. 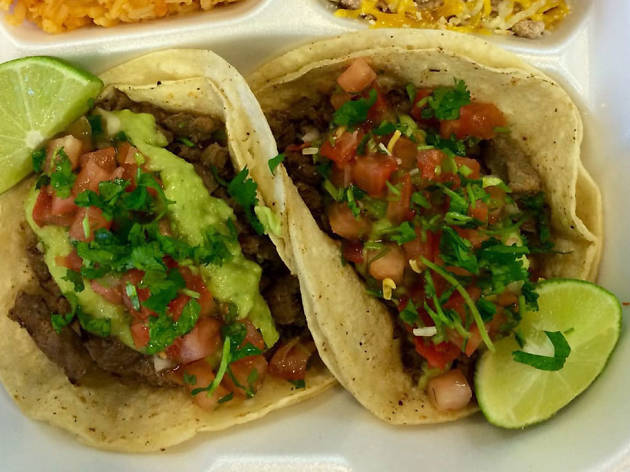 The man is known simply as Carlos. He has his own scratch Mexican kitchen inside of a gas station in the suburbs. There will be times when the wait to try his food will be upwards of 40 minutes. In a gas station! Everything he makes is fresh and so damn good. Carne asada is perfectly grilled, marinated and spiced. It’s got those rough edges, that char you need for it to be perfect. Served on corn tortillas and topped with pico de gallo (and maybe guacamole), this dish proves that, often, the simplest food is the very best food. 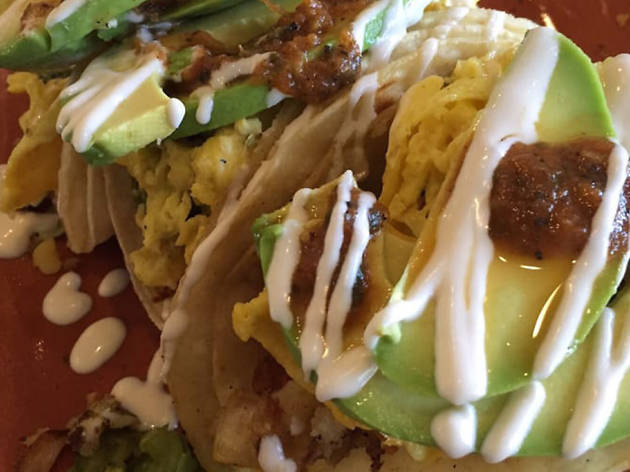