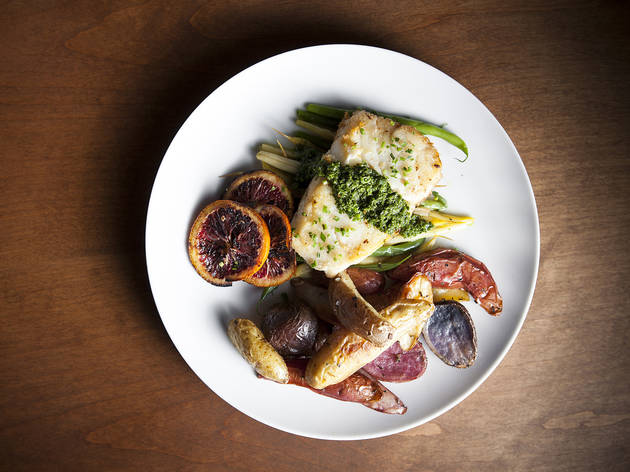 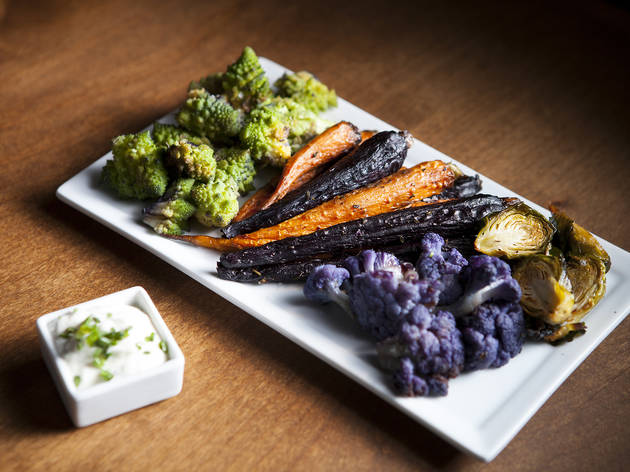 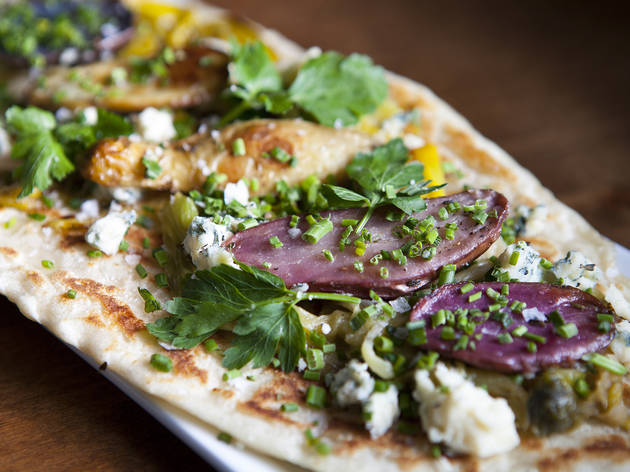 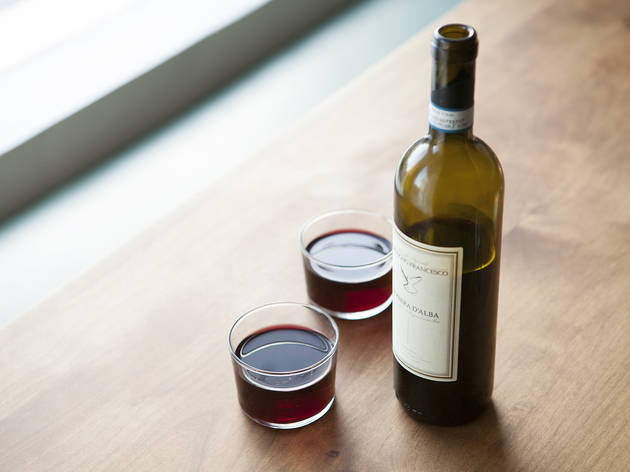 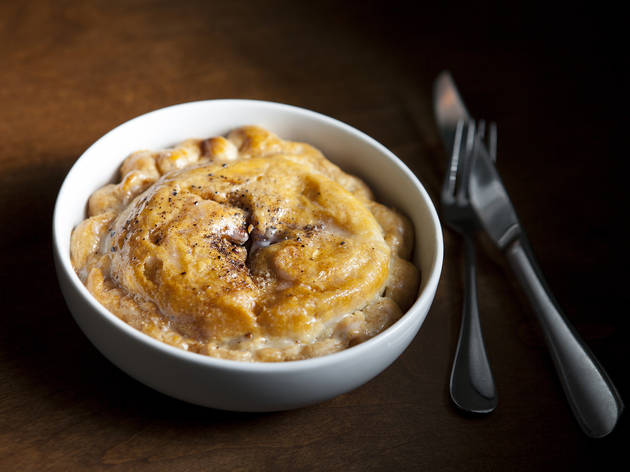 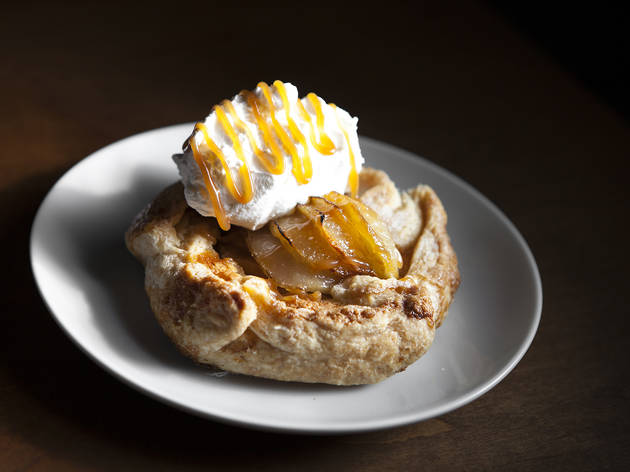 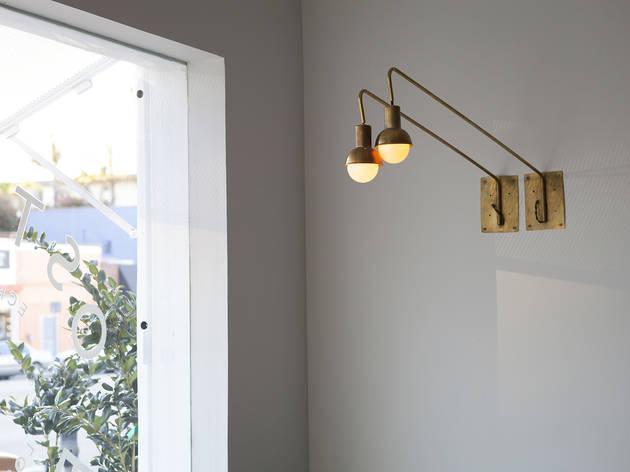 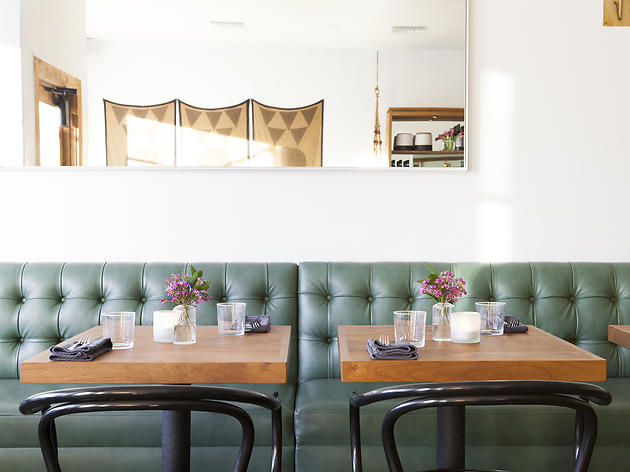 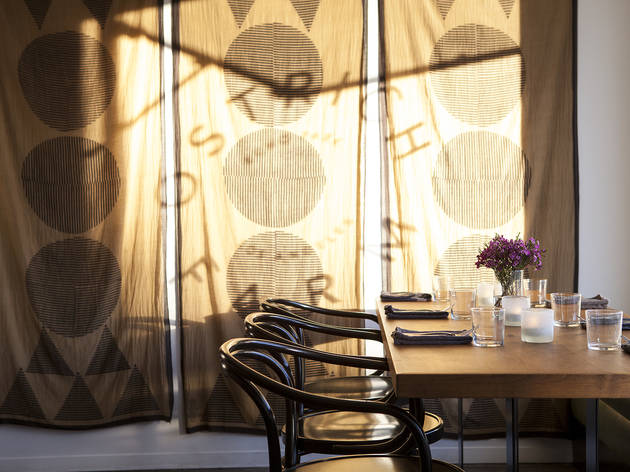 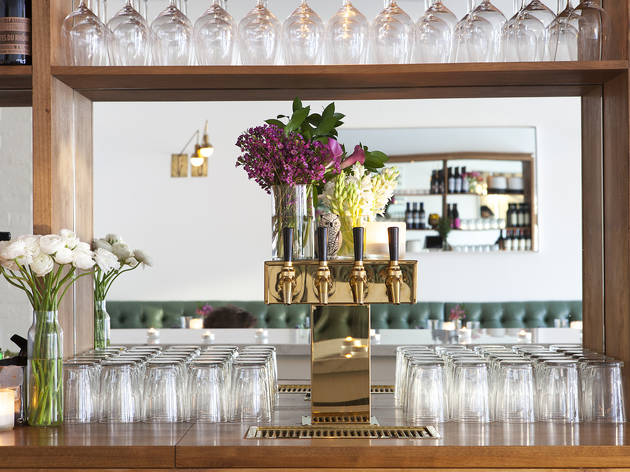 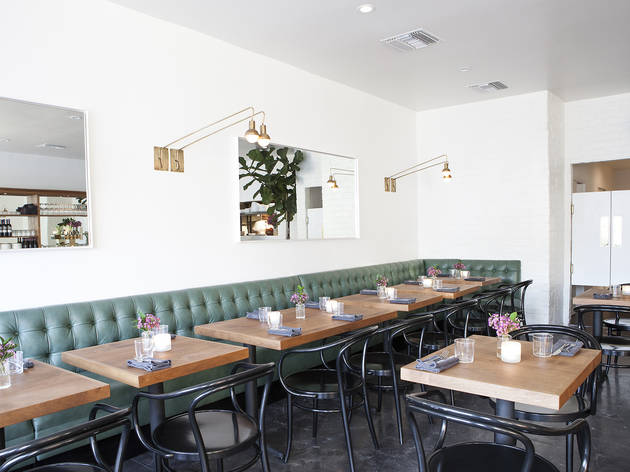 Wood-grilled and roasted dishes are the central focus of this fantastic neighborhood eatery, where market produce drives the daily menu.

Looking around Ostrich Farm, a shoebox of a restaurant owned by husband and wife team Jaime Turrey (who is also the chef) and Brooke Fruchtman, a common observation is: I could take my parents here. Homey and devoid of pretense, the Echo Park eatery is a place for family but also for friends, a date, or a solitary post-work drink at the bar. That is: it's comfortable, a sentiment carried through to the mostly wood-grilled and roasted food, which is entirely excellent.

Turrey changes the menu on a regular basis—daily, our server professed—and each dish reflects the mindset of a chef who canvases his market haul, making up the menu as he goes along with each inspection of rhubarb, pear or bunch of kale. Leeks and thin discs of potato top the flatbread deluxe, along with crumbles of creamy Stilton cheese and onions that result in a luxurious iteration of pizza. This, in addition to a bright arugula salad boasting apples and goat cheese, is the best way to start a meal at Ostrich Farm. The vegetables shine in every dish—accented by light dressing or, in the case of a plate of roasted winter vegetables, a ramekin of homemade horseradish—all the while remaining the primary focus. Whereas a bowl of mussels and clams is a bit underwhelming—they're good, but pretty standard—chef Turrey's vegetable-driven plates left us entirely content.

It's also wise to start with veggies so that you can leave room for the potpie. If Ostrich Farm's menu changes on a regular basis, I hope this entrèe is the one that sticks around. Golden, moist pastry envelops tender beef, shredded among carrots and parsnips and fennel in what is some of the best potpie I've had in a long time. Most of its success is due to the dough, but it's an all-around stellar dish that could be easily shared between two people. On a plate displaying a pristine piece of Chilean sea bass, the execution of each ingredient prompted wide-eyed looks around the table and nods that can only mean "This is a goddamn delicious piece of food I just put in my mouth." Topped with a smear of creamed spinach and slices of blood orange, the buttery bass pairs well with the accompanying haricot vert and purple and yellow fingerling potatoes, all of which avoid being drowned in oil or spices or unecessary extras.

We had a pear gallette for dessert and, while the dough itself was yet again a highlight of the dish, the gallette was lacking in enough pear; we had to work our way to the middle to find any substantial fruit. But after a meal as enjoyable as this one, it's hard to fault Turrey for a less than perfect pastry—and with a menu that changes this frequently, tomorrow's dessert may be a whole different story.

What to Drink: The first thing you might notice about your drink is the glass that it comes in. Wine glasses—which I recommend filling with an earthy Francesco Borgogno Barbera D'alba ($13)—look like an Old Fashioned glass sliced in half with a samurai sword. Sparkling wine arrives in a darling, petite flute; if you're more of a beer drinker, the White Dog IPA ($7) is a solid choice—and comes in a squat, shortened glass for imbibing.

Where to Sit: Ostrich Farm is loud, and there is no escaping the din regardless of where you sit. Sage green booths line one wall, a row of stools pressed up against the bar line another, and there are a few tables situated between the two. It's a tiny space, and not one conducive to seating large groups.

Conversation Piece: Despite the name, which simply refers to the surge of ostrich farm tourist attractions in the 19th century, there are zero plans to serve the large bird on the menu.