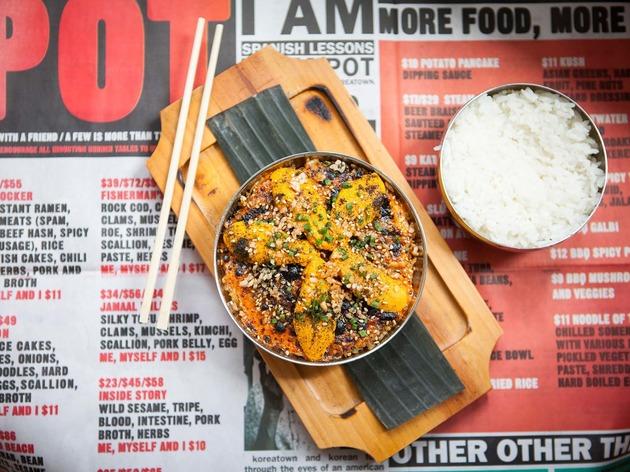 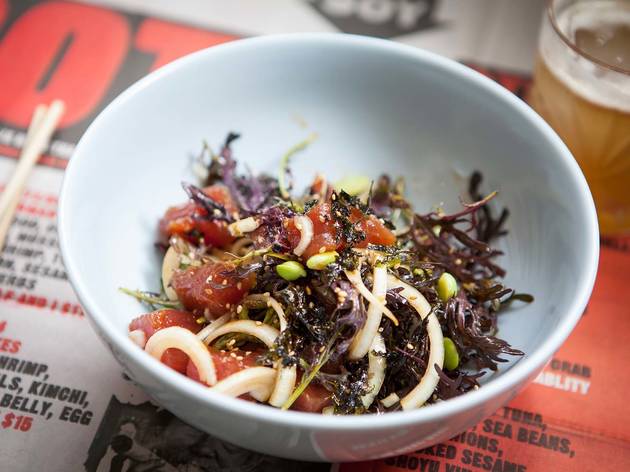 2/12
Photograph: Jakob N. LaymanPoke Me at Pot at The Line Hotel 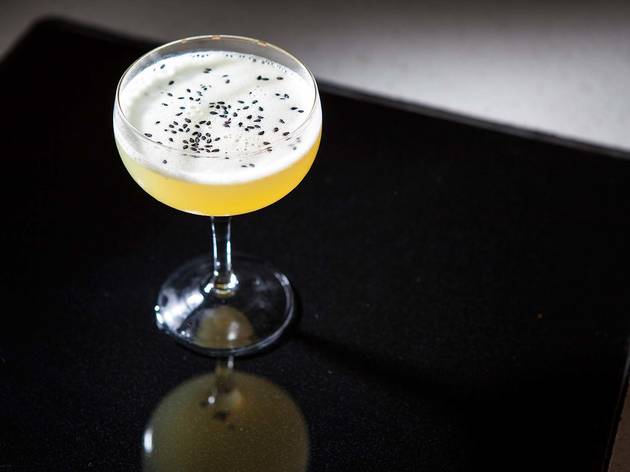 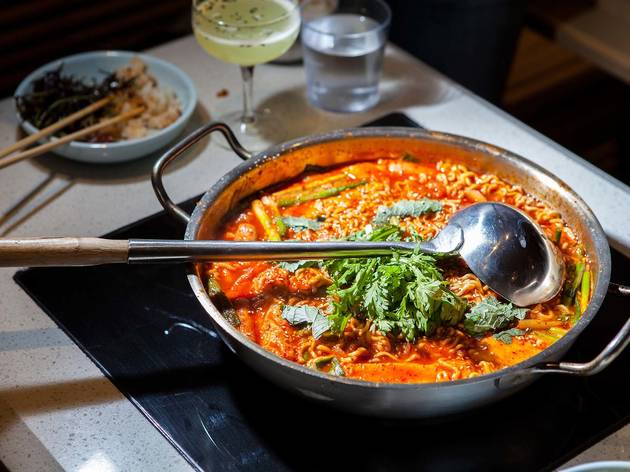 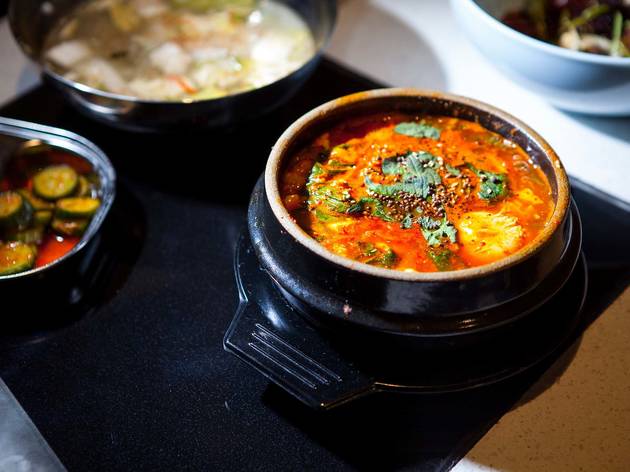 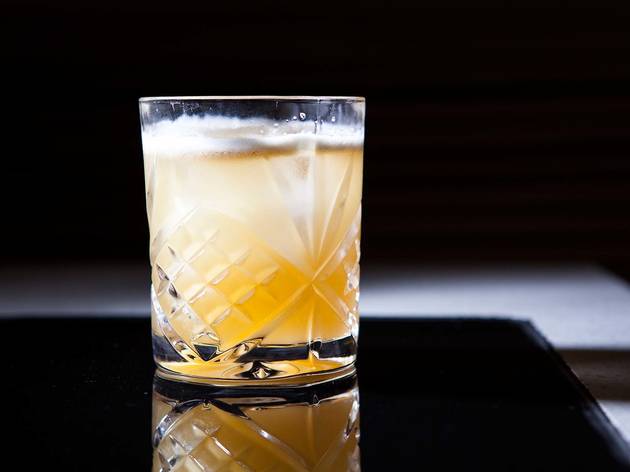 6/12
Photograph: Jakob N. LaymanPenicillin at Pot at The Line Hotel 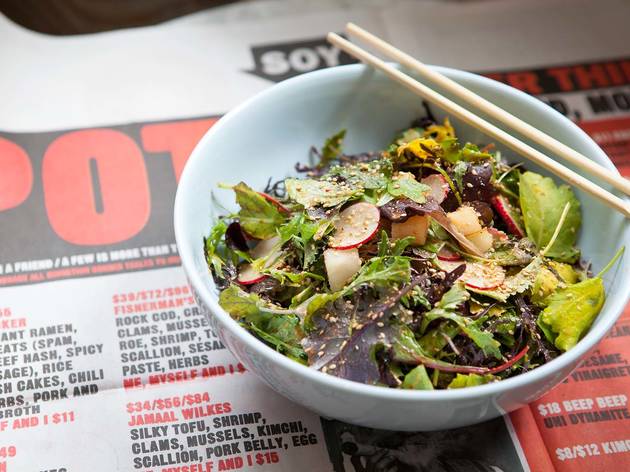 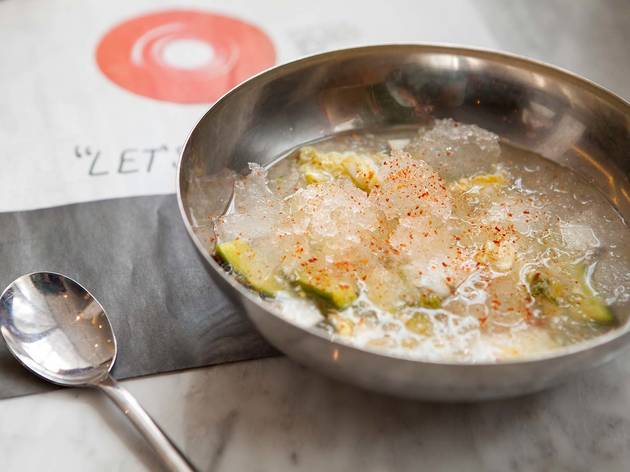 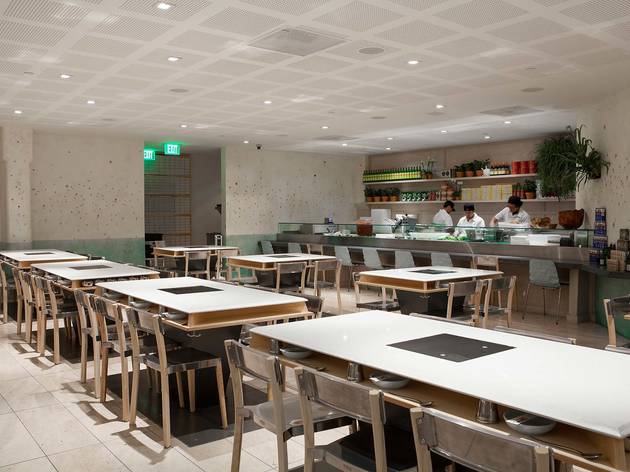 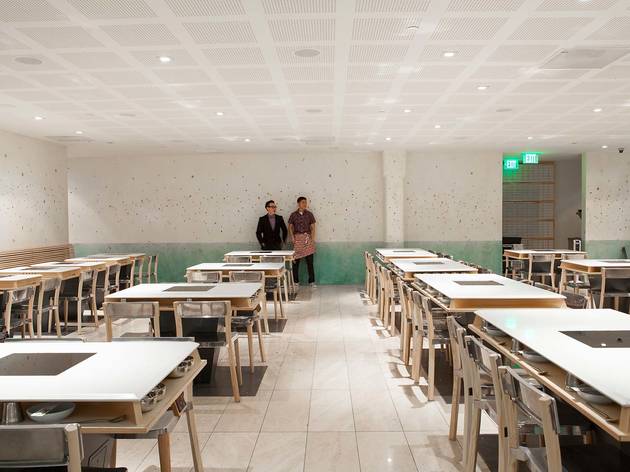 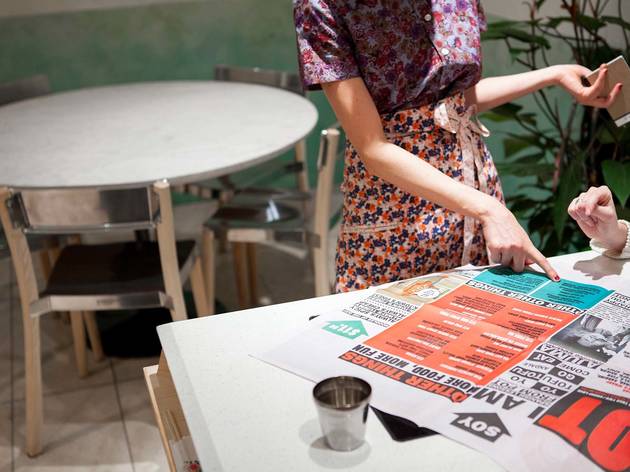 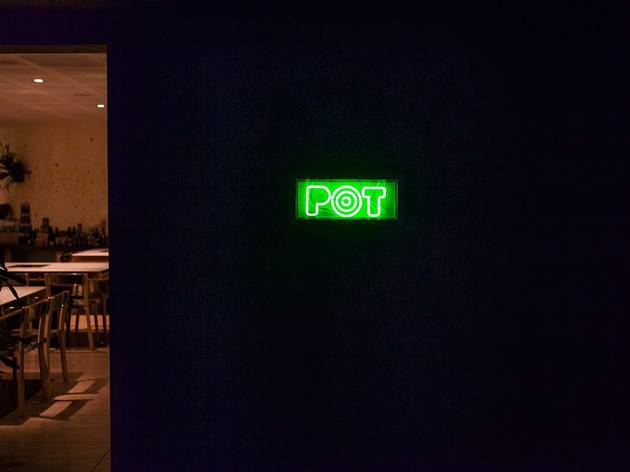 It's been a hectic year for chef Roy Choi. After the release of his memoir/cookbook L.A. Son, he segued into curating the dining program at Koreatown's Line Hotel, which now includes POT, POT Cafe, POT Lobby Bar and, most recently, the greenhouse-inspired Commissary on the hotel's second floor. It was just announced that Choi is getting his own show on CNN, and that he and chef Daniel Patterson will soon be launching Loco'l, a healthy fast food chain.

So how is POT, the much-anticipated hot pot restaurant that seemed to dominate most of the Roy Choi news this past year, holding up? Thankfully, it seems that with everything else going on, POT is still a solid anchor in the Line's dining roster.

Past the glowing sign that mimics a marijuana dispensary entrance, POT's clean, white space is punctuated by a thumping sound system that causes apron-wearing waiters to break out in sporadic dance. Have you ever tried eating uni while listening to Next's "Too Close" with a straight face? And yet, it's forgivable because that uni is part of the Beep Beep, a creamy bowl of sea urchin and rice garnished with sesame seeds for a satisfying crunch. You may roll your eyes at first at the name of the Kush salad, until you try it: a salad so packed with flavor that it could almost be a meal on its own, featuring Asian greens, radish, sliced citrus and pine nuts that are drizzled with mustard dressing for a hint of heat. For all the times I've been to POT, this is a dish that I will order again and again.

The menu has grown considerably in the past few months, keeping crowd-pleasers like the Poke Me, a fantastic seafood option that includes generous chunks of yellow fin tuna tossed in shoyu vinaigrette along with edamame, sea beans and Maui onions, while adding dishes with names like "You OK, Guey?" (a beef tartare) and "Roger Wants Moore Octopussy" (charred baby octopus). Those who blush at ordering any dish with "octopussy" in the title should go for the spicy BBQ pork—the tender meat avoids being chewy, and the sauce isn't sickeningly sweet, an issue that "sweet and sour" dishes are all too familiar with. Instead, the sweetness is tinged with a surprising amount of heat and vinegar that left us battling over pieces with our chopsticks.

Of course, diners come for the hot pot, of which there are roughly 10 (sizes range from a good-for-two serving to large group portions). This part of the menu has remained largely unchanged—which is ironic, considering that I find it to be POT's one weak spot. It's not that the hot pot here isn't good, it's just that it is uneven, and you can have varying experiences depending on which pot you choose. The Boot Knocker takes an everything-but-the-kitchen-sink approach, which means there is tofu and instant ramen, spam and spicy pork sausage, rice cakes and fish cakes and corned beef hash. It's a lot—and potent, too, with an overwhelming fish taste that dominates the dish. The Jamaal Wilkes is packed as well, with tofu, shrimp, clams, mussels, kimchi and pork belly, though it manages a more balanced finish. Sometimes it's just best to go old school, literally: the Old School hot pot is one of the best on the menu, avoiding a laundry list of ingredients and instead sticking to superbly marinated bulgogi, glass noodles and fiery kimchi. This, too, I wouldn't hesitate to order at every visit.

For dessert, cross the lobby to Pot Cafe, where you can pick up LAMILL coffee and a red bean bun, or a light and fruity Hello Kitty cake. Just make sure to recognize the mural of rappers that looms above the pastries on display. This is still Choi's house, after all.

What to Drink: Beer, wine, soju cocktails, sake—there's a lot to choose from when it comes to drinking at POT. The thing is, a beer—a classic Singha ($6), perhaps—is probably your best choice here. But if you're in the mood for a cocktail, pop on over to POT Lobby Bar next door or, better yet, Commissary on the second floor, where you'll find drinks like Gin & Juice (go for the watermelon) or the refreshing White Fir with Calisaya and passion fruit (both $13).

Where to Sit: Each table consists of a large, stationary block that contains a burner for your hot pot, though if you order one of these it'll likely take up your entire table. The only gripe I had with the seating was that my knees pressed up against the block every time I wanted to get closer to my food (and I always want to be closer to my food). If you're not ordering hot pot, the best place to sit might be the counter, where you can watch the kitchen in action.

Conversation Piece: Roy Choi's twitter may be the best thing to happen to the social media site. Follow him @RidingShotgunLA, where he changes his name on a weekly basis, posts news about his upcoming projects and, my personal favorite, tweets while he's high.