Mention the word "vegan" at chef Phillip Lee's new restaurant, The Gadarene Swine, and he will be swift to correct you. "I'm not a vegan," he will say, though his wife, pastry chef Margarita Lee, is. But the duo from Scratch Bar doesn't need to defend their food by making it sound palatable to meat-eaters—it already is. The cottage-like, ivy-covered eatery is unlike so many other vegan restaurants in the city (there is no "daily affirmation" you must recite before ordering your meal, or a menu filled with tofu and seitan), and not once on my visits did I ever think,"There needs to be meat in this dish." The food here is what a meat-eater wishes all vegan food would taste like, and what any vegan should hope for on a daily basis.

From the beginning, it becomes clear that Lee is playing with texture as much as he is with flavor. A bowl of fluffy popcorn is dusted with roasted garlic and thyme; each kernel dissolved in our mouths like a fleeting flavor bomb. Kale chips, too, luxuriously disintegrate with one bite, which sounds strange but is actually a testament to how remarkable it is to make kale a memorable appetizer. The olive stuffed olives are one of the best appetizers I've had this year. "It's like an olive donut," said my friend, and with a deep fried crust and a drizzle of honey (the only non-vegan ingredient on the menu), it's a pretty accurate comparison.

When we did the tasting menu (which is only available at the chef's counter), Lee was a personable but efficient presence, checking in occasionally to see if we were ready for the next course, moving at a comfortable pace as he swapped one dish out for another. A series of unbelievably flavorful dishes rotated under our nose: a boat of eggplant—its skin fried and insides scooped out, then pureed and placed back in the skin—acts like a loaded potato chip topped with pickled onions, avocado puree and pomegranate; a strawberry gazpacho is smoothly poured around diced strawberries and cold noodles drizzled with Champagne vinaigrette, a dish that Lee calls "Strawberries and Champagne." Every plate is composed of ingredients that are fried, pureed and pickled, and yet no two dishes taste the same. A brightly colored cauliflower creation displays the brassica as a whipped pillow, fried chips and blackened heads of the vegetable.

If the absence of meat goes unnoticed, it's because it often seems like meat has been included. A mushroom plate features chunks of fungi so rich in texture that you almost think that you're chewing on slices of beef. Instead, there are enoci mushrooms and peas in a buttery, alfredo-esque sauce, along with leathery mushroom strips that mimic jerky. The delightful vegetables in a box, a play on Scratch Bar's squid in a box, features the same smoky, eggplant puree as its La Cienega counterpart, but this time with vegetables bound by crispy yucca.

I wish I could say that there is nothing to find fault in here, but there are a few weeds. On a second visit, the hand torn pasta contained far more sauce than actual pasta, and even though the roasted tomato sauce with fennel, olives and mushrooms was delicious, I felt like we were missing a sizeable helping of noodles. The edamame came doused in a homemade barbecue dressed with seaweed, a combination that could possible have worked on another dish, but felt bizarre with edamame. And while there is so much to love about the Gadarene Swine's layout—including the dreamy patio with its strings of lights and garden feel—the music inside was loud and ill-fitting.

Still. If a restaurant can't turn out a good dessert, its run will be quite short, and the Gadarene Swine does not have this problem. In fact, the desserts here (made by chef Margarita Lee) are as phenomenal as the savory dishes, and even more creative. Sitting by our plate one night was a hollowed-out orange that served as a candle. I paid no attention to it until the end of the meal, when Lee placed a slice of tres leches into an alien-looking pot, spooned grapefruit granita and a swirl of grapefruit cotton candy over the cake, and then poured the olive oil, which had been heating up in the orange, over the whole concoction. What resulted was a tart, complex and smoky bite that was unlike anything I've eaten in a long time.

What to Drink: There is beer and wine here, but one of the more interesting beverages is the cold-pressed juice, to which you can add sake. On a recent visit, the juice offerings included apple, pineapple and watermelon. I chose the watermelon, which was light and refreshing, and the addition of liquor made it feel less like I was a child drinking juice at the grown-up table.

Where to Sit: The best way to experience The Gadarene Swine is through Lee's tasting menu at the chef's counter. Here you can watch the kitchen in action, and get to know Lee in a way that is more intimate than at one of the tables. But at $85 per person, this option isn't the most accessible, and so one of the tables will do just fine. For a sunny afternoon visit, a spot on the small outdoor patio is a way to enjoy Lee's food while taking in the Ventura Boulevard crowd.

Conversation piece: The 2,000 square feet of hillside behind the restaurant came with the lease, and Lee is planning on using that space to start a garden—the fruits (and vegetables) of his labor will be used at the restaurant, of course. 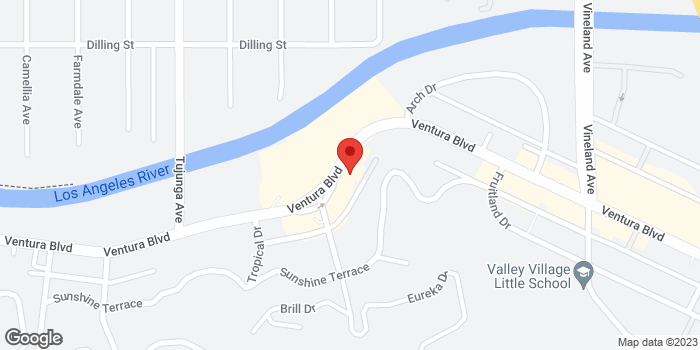