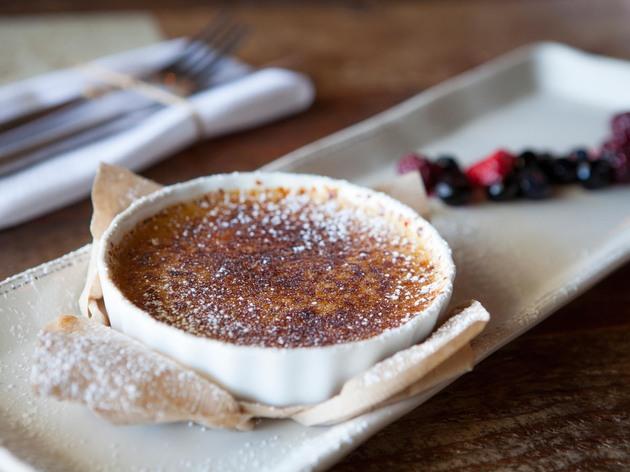 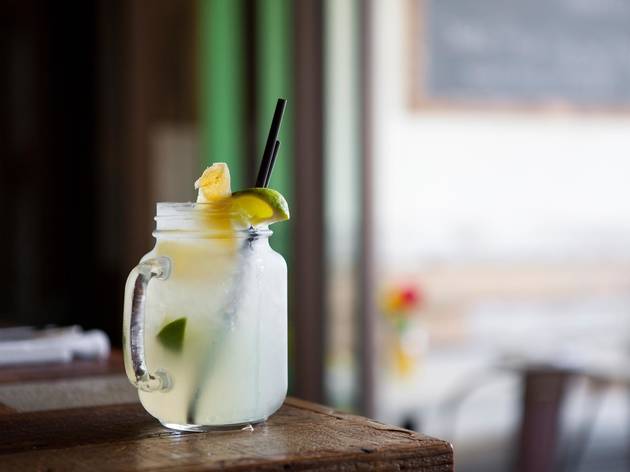 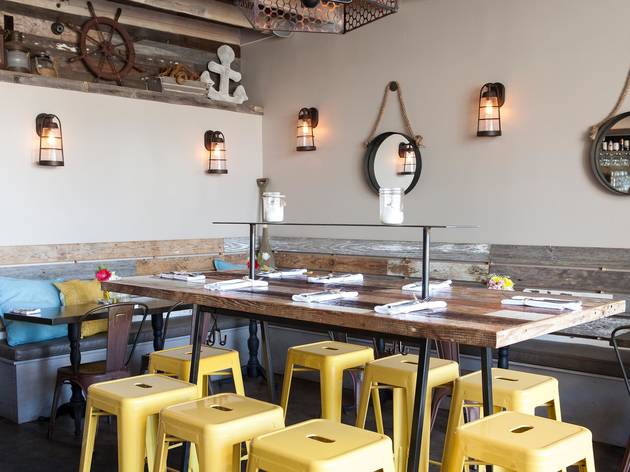 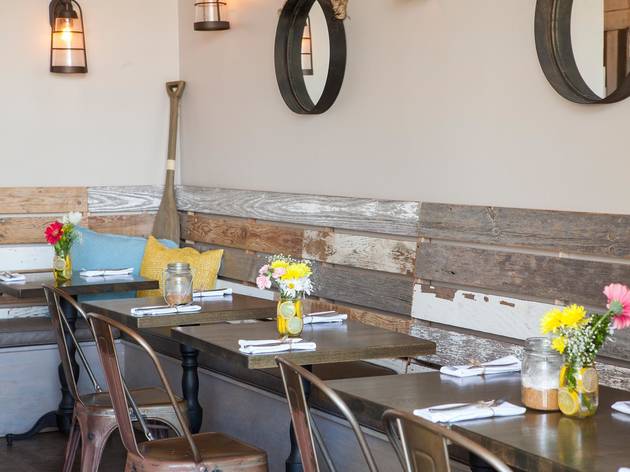 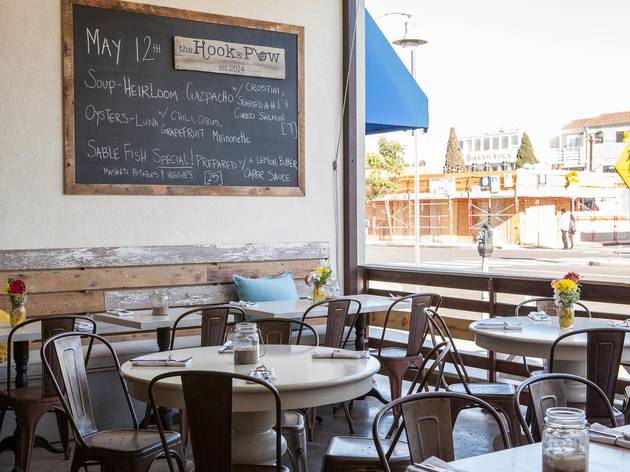 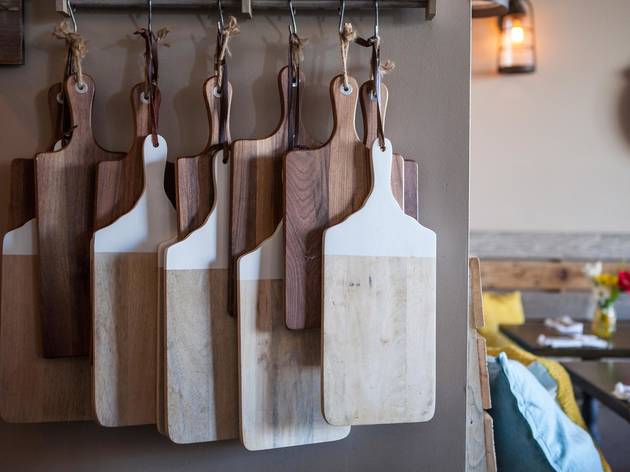 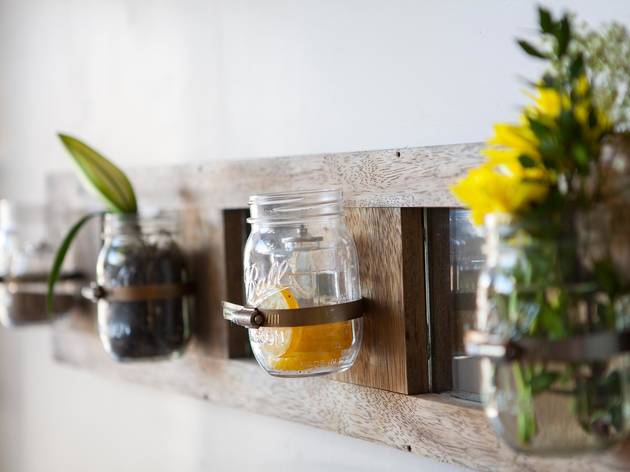 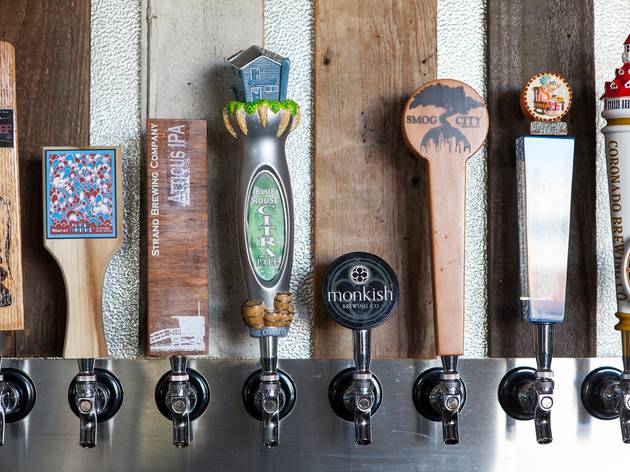 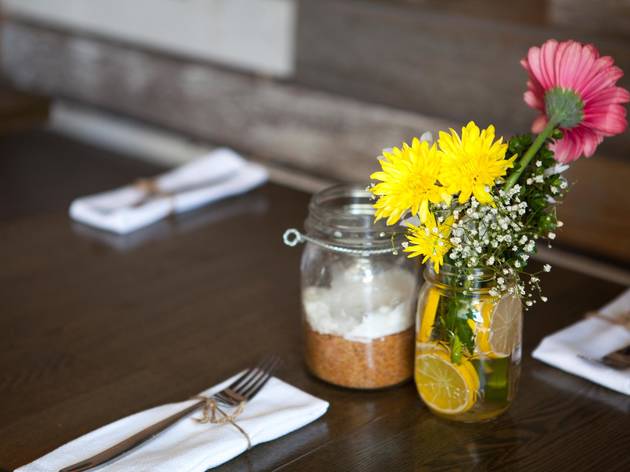 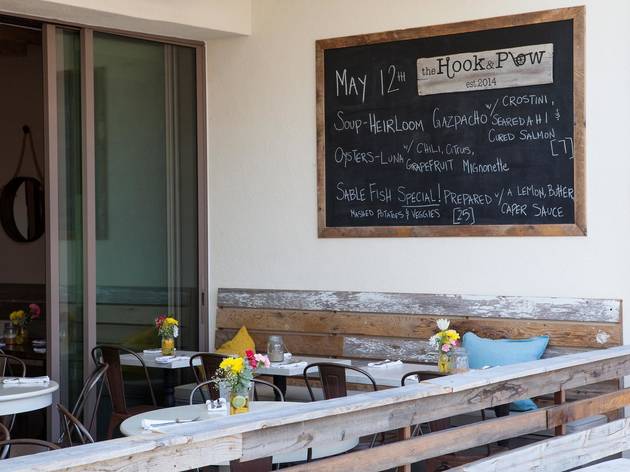 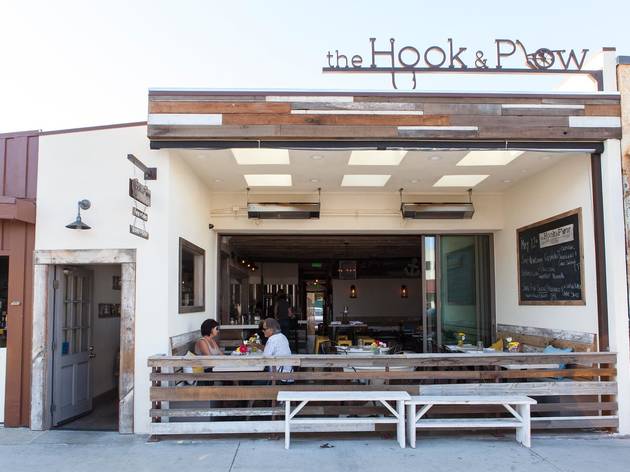 The South Bay may have a reputation for being somewhat of a bubble, but let's be honest—a Downtown dweller isn't likely to make a trip down there for dinner, either. It's not altogether surprising. Yes, Manhattan Beach is cultivating quite a dining niche for themselves (we love you, Fishing With Dynamite!), but Hermosa? Let's just say this South Bay hood is better known for its drinking culture, not its culinary scene. Which is why The Hook & Plow, a farm- and sea-to-table concept that opened in late February, is such a refreshing arrival. Run by husband and wife team, Brian and Bre Kelleher, and sisters Lisa and Lauren Cassity, the restaurant's emphasis on family shines right through to its homey decor. True, there is some nautical kitsch—anchors and ship's wheels are aplenty—but there are also much-appreciated pillows that line the patio's benches, and darling jars of dainty flowers on each table. Chef Johnny Lopez, who comes to Hook & Plow via Nick's Fish Market at the Fairmont Hotel in Maui, knows his stuff—both land and sea—and won us over during a recent dinner visit.

As beautiful as the surfers trudging past us towards the beach, so too were the plates that landed on our table, starting with a half-dozen Luna oysters from Carlsbad. "They're little guys," cautioned our waiter, but the fresh shellfish packed in a considerable amount of flavor, anchored by a beautiful scoop of cool melon granada in each shell. I'd come back just for the oysters (a happy hour indulgence, perhaps?)—oh, and the Ahi Poke, whose chunks of sushi grade ahi are impressively large. The raw fish is piled on top of avocado and cucumber slices, topped with pickled onions, julienned peppers and a dash of sesame seeds. It was this dish that seemed to solidify Chef Lopez's talent for delivering fantastic sea fare: oysters done well is appreciated, sure, but it's not often that I swear I could eat raw ahi every day for the rest of my life, as I did here.

There is a dish on the menu called the Scallop & Pork Belly BLT, but it is not a BLT—which, thank God, because anything less than what came out of the kitchen would have been a shame. A row of expertly seared scallops and fatty pork belly is interspered with truffle chips and bookended by frisée; it's the perfect marriage of land and sea, and thoroughly indulgent without being too much (though the price is a different story—at $27, it is one of the more expensive options on the menu). There is a sandwich section as well, which lists a classic burger, a fried catch of the day between a brioche bun, a beef dip, an organic club and a pulled pork sammy. The last item (named the 30 H) features a beautiful beer braised pulled pork, Napa house slaw and mango chutney piled between a pretzel bun. It's the kind of sandwich you might have at a friend's rooftop picnic—you know, if your friend was a gourmet chef and had an uncanny knack for balancing sweet, shredded pork with the slightly acidic quality of stellar slaw. If you have a friend like that, consider yourself lucky.

The dessert list is short and, like the rest of the menu, changes frequently. On a recent night, a crème brûlée infused with coffee porter was one of two options listed, and while the goat cheese-cake was just as enticing, I can't get that brûlée out of my head. It was light and creamy, and the slight bitterness from the coffee happily coexisted with a spoonful of stewed berries on the side. "That looks amazing," said someone on the street, pointing at the ramekin as they stopped to peer at our table. And it was.

What to Drink: The Hook & Plow does not have a liquor license, instead offering soju cocktails along with a selection of beer and wine. While soju has a sweet, vodka-esque quality that can be used to create some phenomenal libations, that unfortunately doesn't always happen here (the California Mule tasted watered down, and more like a Mike's Hard Lemonade). Stick with beer and wine—which pair better with all of the seafood you'll be eating anyway.

Where to Sit: Is there a better way to eat fish than on a porch, watching surfers in wetsuits make their way towards the beach? There are tables inside, but it is best to score a seat street-side, where you'll feel plenty of that ocean breeze.

Conversation Piece: Wonder why the pulled pork sandwich is called the 30 H? "It's because the pork is cooked for 30 hours," said our waiter. Cool story, bro (but we're pretty impressed).