L.A. streets are dotted with tattoo shops—just drive down to Hollywood Boulevard or Melrose and you probably wouldn’t know where to start if you were looking to get inked. Which presents a problem if you’re in the market for body art that lasts forever: Where do you begin? We recommend finding the city’s top tattoo artists and going from there—which is exactly what we did to bring you this list of the best tattoo shops in the city. Whether you’re looking for neo-traditional Japanese designs or a classic black-and-grey portrait, these shops are the real deal, and are staffed with true artists. Trust us, you’re going to want to be one of their clients. 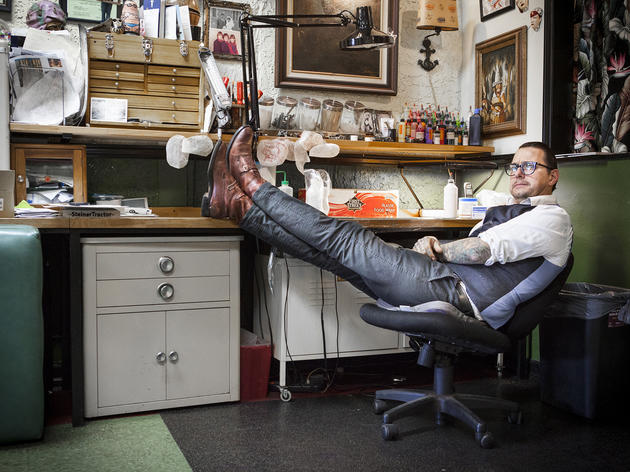 This old-school shop on Sunset is a staple in L.A.’s tattoo community. Run by Brit and tattoo veteran Craig Jackman (seriously, the guy’s been doing this for more than 40 years), American Electric is the Silver Lake go-to for high-quality ink and an often kooky but always laidback atmosphere. Don’t be intimidated by the staff’s experience though—whether you’re looking to get a giant backpiece of a fantasy battle scene, a traditional piece featuring a buxom lady (ask for artist Julie Bolene) or a dainty treble clef behind your ear, the artists at American Electric are thrilled to help you get the tattoo you really want. 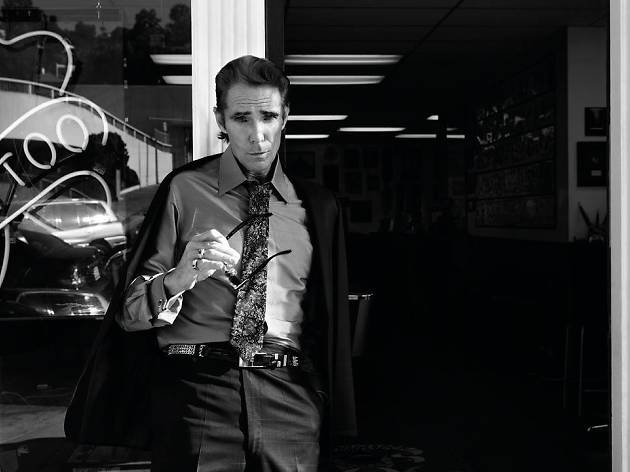 Owner and artist Mark Mahoney has been on the ink scene in L.A. for decades. From underground punk in the ’70s to the black and grey movement of East L.A. in the ’80s to the mainstream popularity of tattoo art in today’s Hollywood circles, he can do it all. The artists here are self-proclaimed “godfathers of black and grey,” but you can find a variety of styles here—East Izhar “the Asian Typhoon” picked up his signature style in Singapore and has more than a decade of work under his belt. Appointments are made by phone only here (please no three-page emails with photos attached—though you can come in for a consultation), and walk-ins are welcome. 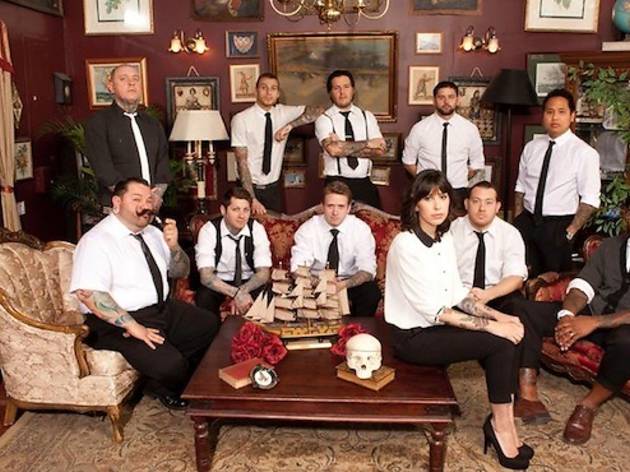 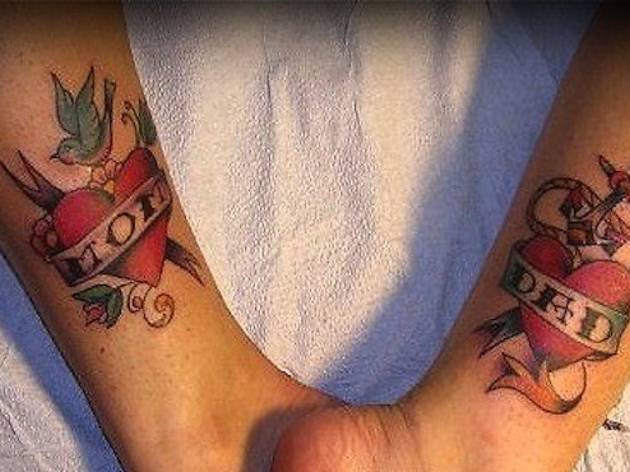 Since ’92, this masculine tattoo shop, with its dark leather furnishings and exposed wood beam ceilings, has been inking and piercing human canvases from all over L.A. The shop’s laidback, creative staff will put you at ease as they drill that beautiful custom sugar skull into your thigh. Old-school, all-inclusive and open later than most shops, Body Electric is a centerpiece in L.A.’s tattoo scene. 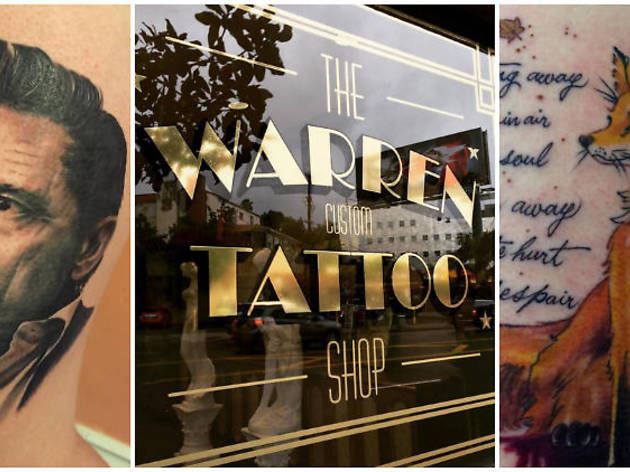 By the looks of her, Zoey Taylor does not fit the image of your typical hardcore, chopper-riding tattooer. After a childhood spent drawing and reading by candlelight in the back woods of Oregon, Ms. Taylor decided she wanted to look like a ’50s movie star and become an artist. She bought some cheap tattoo equipment, and after a few practice tattoos on herself and some brave buddies, she made the southward move to Hollywood. Ten years of training later, after building a name for herself at her own cozy east side studio (decked with pink walls and gold vintage furnishings), she opened a brick-and-mortar, full-service tattoo shop in West Hollywood. 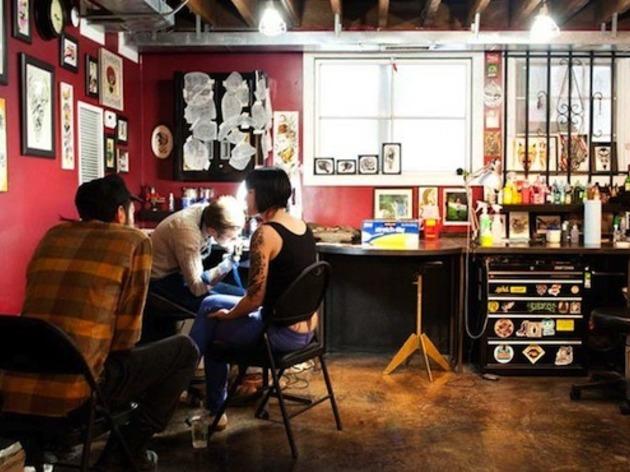 The owner and founder of this Silver Lake basement shop is the intensely right-brained Jeremy Swan. Since 1995, Swan’s easy-to-miss underground locale has amassed an all-male staff of incredible artists. Broken Art welcomes every ink seeker, from the seasoned collector to the nervous newbie, and guarantees both an entertaining session and a brag-worthy piece of art in the end. 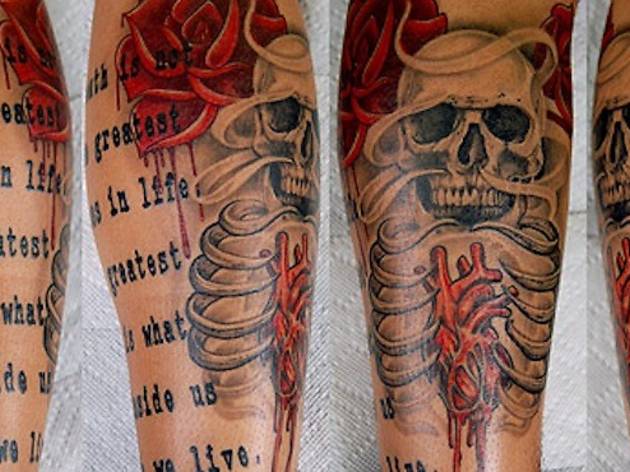 Spearheaded by tattooer/board sportsman/heavy metal enthusiast Jarrett DeMartino, Solid Gallery One is a tattoo studio moonlighting as an art gallery. The shop’s mission is to fuse contemporary art and tattooing—to encourage the appreciation and influence of both art forms. Tattoos at the studio can be scheduled by appointment, but walk-ins are welcome too. The art gallery is appointment only. Check out the site to see what’s on display now. 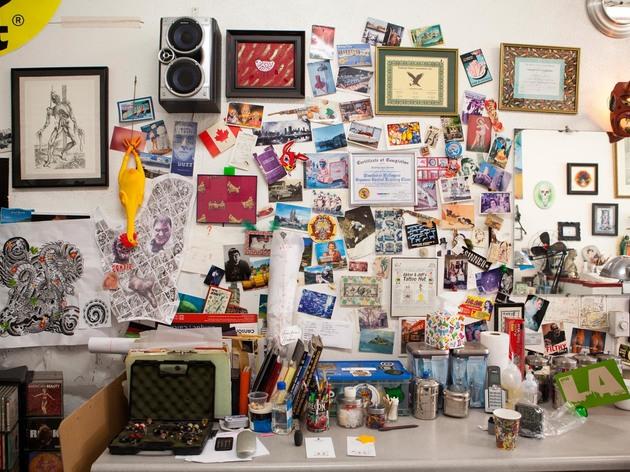 Open since ’95, this cozy Venice shop is run by a tattoo dream team, Karina Mayorga has brought old-school vibes, talent and an unbeatable female energy to the Westside ink scene. Specializing in detailed black-and-grey designs, as well as color work with a sense of humor, the veteran duo bring a dash of everything to the drawing table. 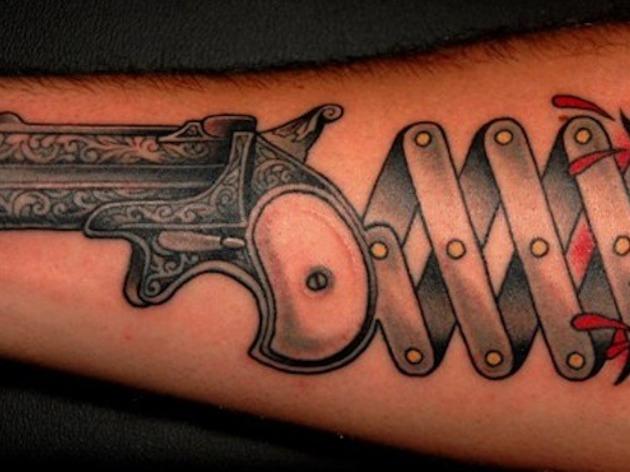 The half-dozen resident artists at this Studio City shop will make you feel as though you’re back in the good old days of no-nonsense tattooing, and at the same time, will craft you an inventive, one-of-a-kind piece. From elaborate color chest pieces and traditional designs to realistic black-and-grey portraits, nothing is off the table when it comes to Unbreakable’s talented all-dude staff.