We highlight all the delicious things the Milanese love to eat: from risotto to piadina, polenta and cotoletta Milanese

Milan's culinary scene is bound to tickle any type of eater's taste buds: home to plenty of migrants, it boasts food whipped up by chefs from all around Italy and beyond. Which means you'll just as easily come across Sicilian food (arancini! Muffuletta! Scacciata!) or sushi as you will traditional Milanese fare.

Speaking of traditional local eats: the city's restaurants are clearly at their best when they embrace all that Lombardy has to offer. The region's gastronomical ethos embraces the stolic, hard-working mountain folk that render it what it is on a cultural level as well. That’s why some of the city’s best food – often heavy, often meat-based, very rarely Instagrammable – isn’t found in the most fashionable eateries and bars but rather in down-home, unpretentious trattorias that have perfected Milanese comfort food after years of practice.

Start with polenta, made with boiled cornmeal, and work your way through cassoeula, a cabbage and pork stew, panettone, a fruitcake of sorts, and beyond. Buon appetito!

RECOMMENDED: Full guide to the best restaurants in Milan 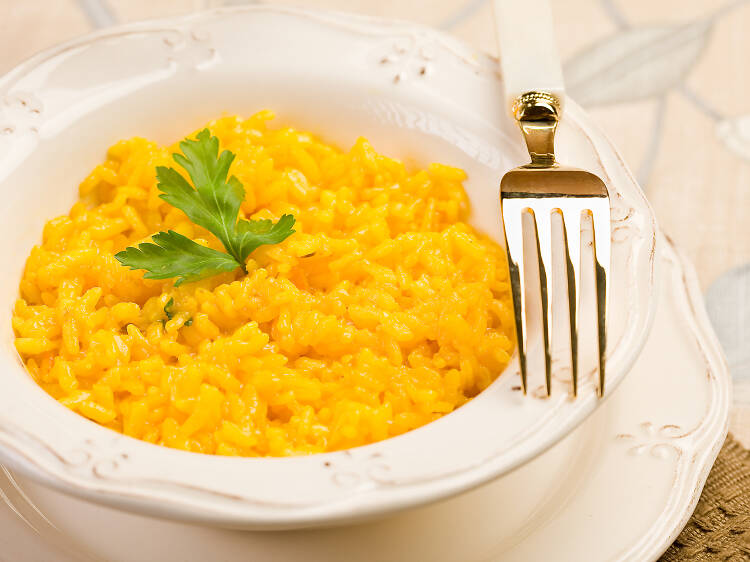 Most people aren’t aware that Italy is the largest producer of rice in Europe. The crop is mainly grown in the flat Po Valley, also known as the “rice bowl of Italy,” where Milan is located. So it’s no surprise that one of the most traditional Milanese dishes is risotto, particularly risotto alla Milanese. Legend has it that this dish came about in the 16th century, when one of the apprentices working on the Duomo’s stained-glass windows decided to add saffron– which was used to colour the glass – to white rice. The saffron adds a pop of yellow to a normally bland-looking dish, but doesn’t add much to the taste: cheese and bone marrow are the parties responsible for the risotto’s luxurious creaminess.

Where to get it: Ratanà, on the edge of Isola, is famed for their take on this staple. 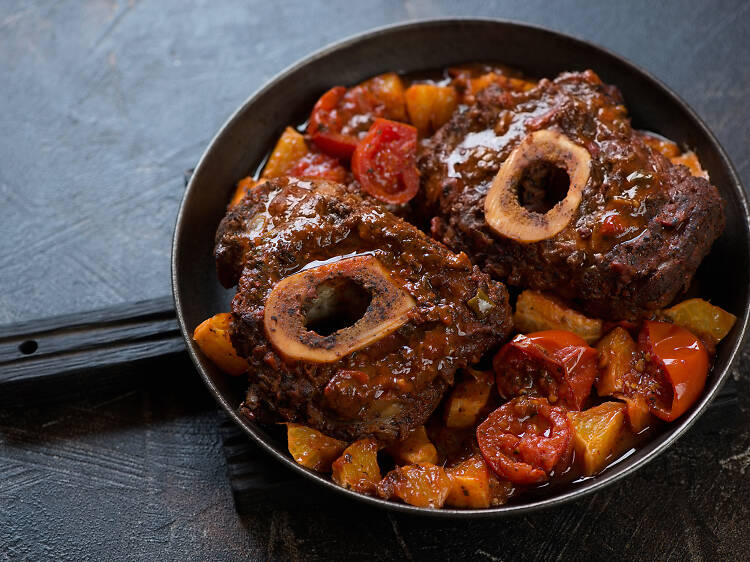 Meat, meat and more meat: that’s what you’ll be eating in Milan if you go for the region’s iconic dishes (sorry, vegetarians). Ossobuco, which translates to “bone with a hole,” is one of two meat stars (cotoletta being the other, see below for more on that) you’ll find at most traditional restaurants. Braised in a mixture of onions, carrots, celery, white wine and broth, the crosscut veal shank is fork-tender and melts in the mouth. What bumps this dish from merely delicious to heavenly is the jelly-like marrow at the centre of the bone. It’s often served with risotto alla Milanese or polenta.

Where to get it: Osteria dell’Acquabella in Porta Romana, a simple, family-run spot that draws almost exclusively on Milanese culinary traditions, consistently puts out an excellent ossobuco. 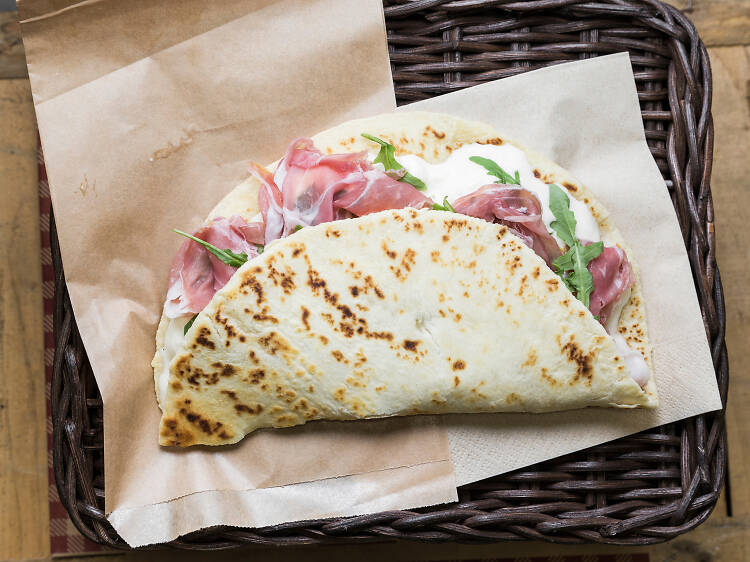 Despite its resemblance to a quesadilla, the piadina, a thin, flaky Italian flatbread, is anything but. It’s slightly thicker than a flour tortilla and yet improbably light and crispy after being freshly cooked on an electric griddle. With its roots in the present-day Emilia-Romagna region, the piadina has conquered the lunch crowd in Milan, where it is stuffed to the brim with meats, cheeses and the odd vegetable. Even in more refined spots, where the piadinas are not quite as engorged with fillings, people still make short work of them, enjoying the gooey cheese inside before it hardens. You’ll see this lunch staple all over the city (it’s arguably more popular than the world-famous panino).

Where to get it: One of the best can be found at Piadineria Artigianale Pascoli, a bright shop near Milan Central railway station. 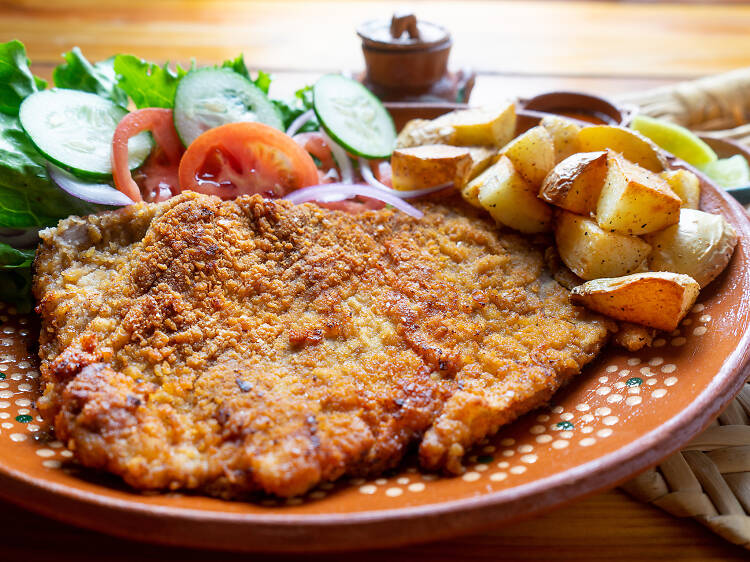 A breaded veal cutlet fried in butter, the cotoletta alla Milanese can be found almost everywhere in the city, unlike other traditional recipes that are more often the realm of the home cook. A cousin of the schnitzel, the cotoletta is rich without being over the top, which makes it something that can be eaten with (slightly) more regularity. It helps that there are many ways of preparing it, making some versions heavier than others: there’s debate over boneless versus bone-in, thin and crunchy (something more akin to a schnitzel) versus thick and juicy.

Where to get it: At Trattoria del Nuovo Macello in Calvairate, the cotoletta is bone-in and thick, the perfectly cooked veal covered in a thin, crispy outer layer of breadcrumbs. 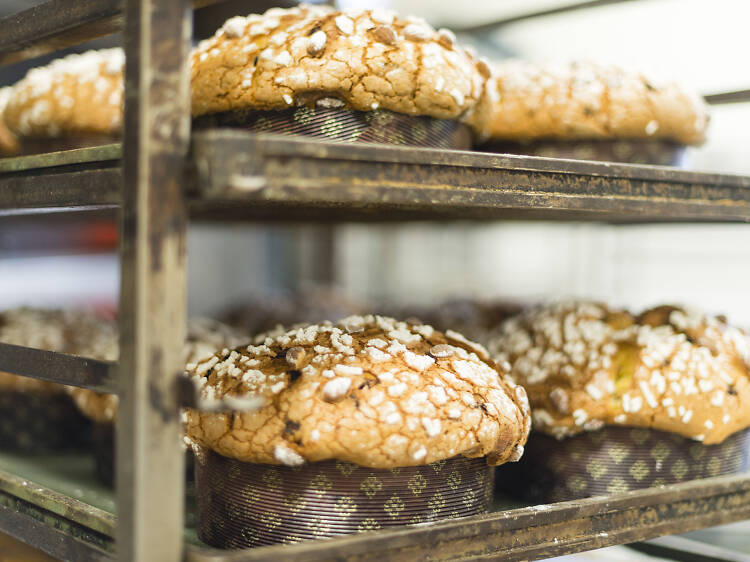 There are many stories about the exact origins of this Christmas fruitcake, but almost all of them point to Milan as its birthplace. Panettone is everywhere during the holiday season, with boxes stacked high in bakeries and filling up entire aisles in supermarkets, and many people buy it as a gift for friends and family: nothing spreads a bit of cheer like a slice of this pillowy, sweet bread and a glass of prosecco. But you may be surprised to find out that there are pastry shops that bake panettone all year round; these spots have mastered the notoriously difficult bread, which is pumped full of large pieces of candied citrus and raisins.

Where to get it: One of the best places for panettone is Pasticceria Cucchi, an elegant shop on Corso Genova that seems pleasantly preserved in time. 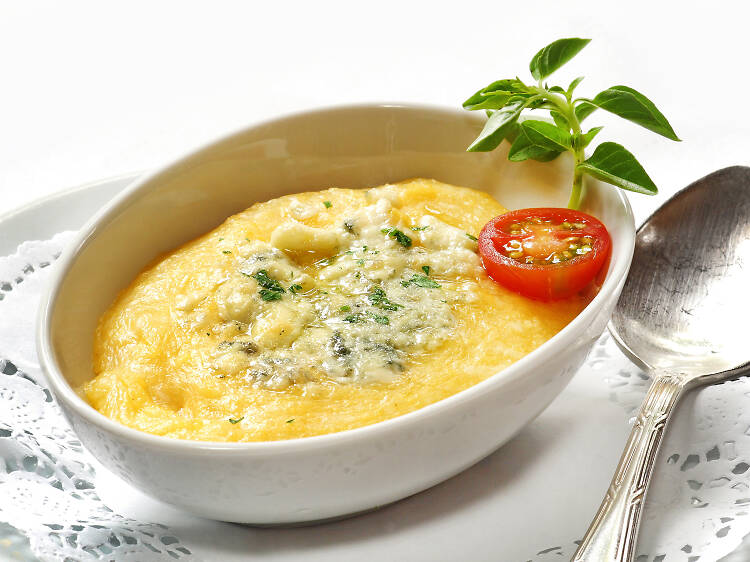 When done poorly – whether allowed to go too mushy or baked into a much too stiff loaf – polenta is bland and uninspiring, which may explain why it often gets a bad rap. But when prepared properly, the boiled cornmeal (also described as cornmeal porridge) is one of the best comfort foods out there. Northern Italians are serious about their polenta, to the point that various societies were founded in the 18th and 19th centuries to celebrate its place in Italian culture. Even more telling is that southern Italians have been known to use “polentone” (which literally translates as “big polenta”) as a derogatory term – although mild as such terms go – to describe someone from northern Italy.

Where to get it: While polenta is mostly found as a side dish to meat and stew mains, Al Cantinone, a restaurant near the Duomo, offers some fabulous appetisers that pair the dish with a variety of cheeses, mushrooms and more. 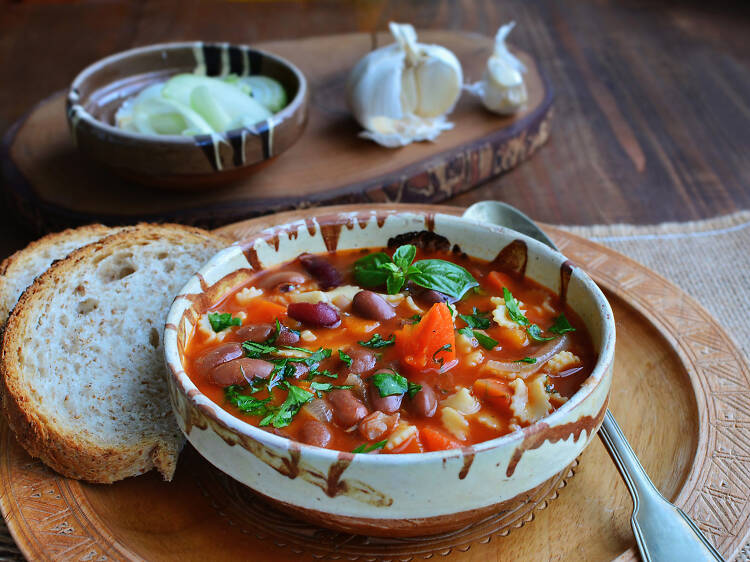 Who needs GPS when you have minestrone? Some say that a few sips of the soup will tell you exactly where you are on the peninsula. Considering the Milanese love for rice (look no further than the first item on this list), what separates minestrone in Milan from that in other regions is the use of rice in place of pasta. Together with vegetables of all types – cabbage, beets, celery, spinach, parsley, tomatoes and more, depending on what’s in season – the rice is cooked in a pleasant if not particularly noteworthy broth. Served hot in the winter and cold in the summer, this soup is your best bet for a solid few servings of vegetables, which don’t feature heavily in most traditional Milanese restaurants.

Where to get it: Trattoria Mirta, northeast of the Loreto neighbourhood, makes an excellent bowl of minestrone garnished with goat cheese, if you’re lucky enough to catch it on the ever-changing menu. 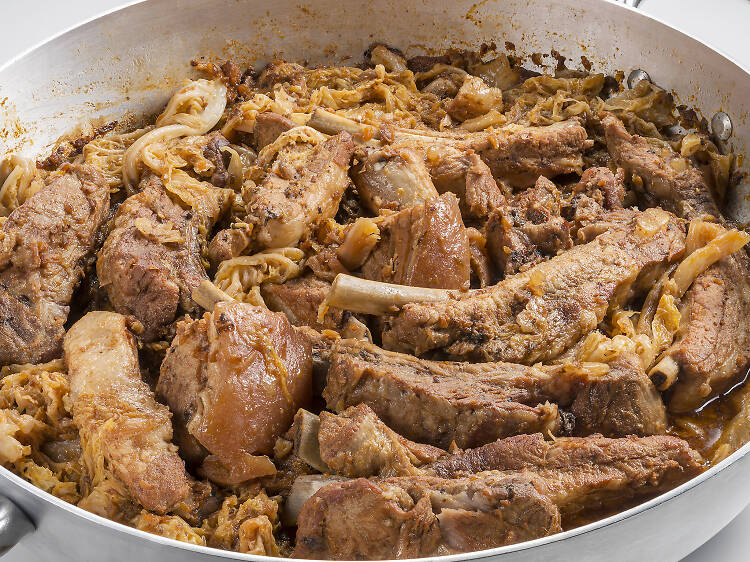 A warming pork and cabbage stew, cassoeula generally pops up on menus during the colder months, when all you want is a bowl of steaming hot goodness. This is one of those head-to-tail Italian recipes – in addition to sausage and cabbage, less noble pig parts like the head, feet, ears and more are tossed into the pot. It’s traditionally consumed on January 17, the feast day of Saint Anthony the Abbot, fittingly the patron saint of pigs and butchers among other things.

Where to get it: One of the best spots in Milan offering cassoeula year round is Don Lisander, an old-school restaurant that borders Brera and Quadrilatero Della Moda, two neighbourhoods north of the Duomo. 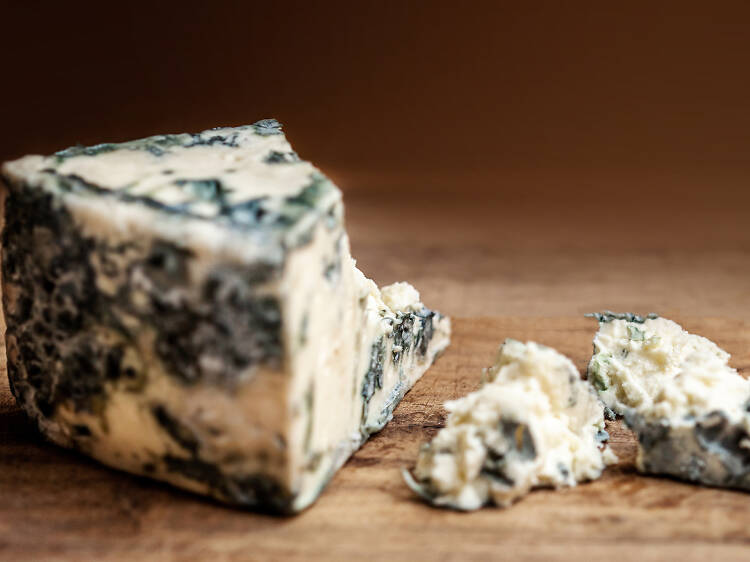 Located in greater Milan, the small town of Gorgonzola is famous for being the birthplace of the eponymous cheese (although other Italian towns also claim gorgonzola as their own). The area was long a centre of cheese production, particularly soft cheese – there are supposedly even records from the 18th-century court of Empress Maria Theresa decreeing that the area be used as meadows for dairy cows. Nowadays, the blue cheese, made from unskimmed cow’s milk, is produced all over northern Italy, mainly in the regions of Lombardy and Piedmont. Gorgonzola comes in two forms: dolce (literally, "sweet") which is sweeter and creamier, and piccante (literally, "spicy") which has a spicy, pungent bite.

Where to get it: At Asso di Fiori ("ace of cheese"), indulge in the selection of Italian cheese platter or opt for the upgraded selection of cold cuts and wine-soaked cheeses. 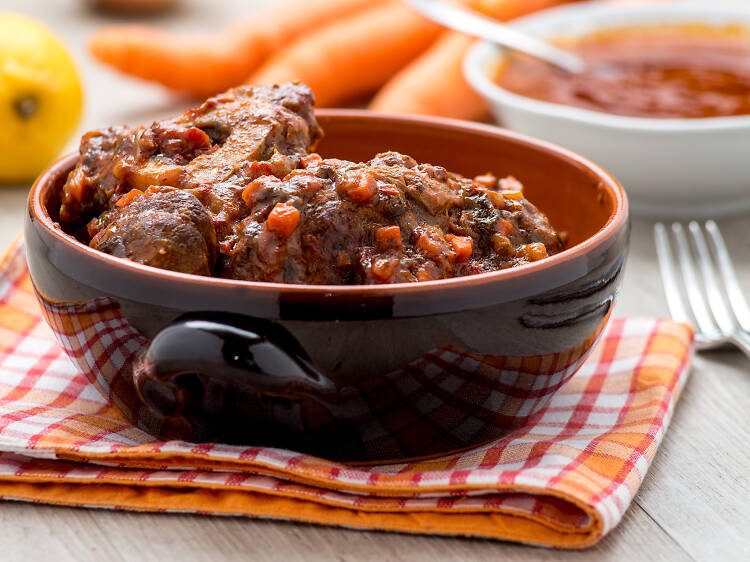 Busecca is both the word for “tripe” in the Milanese dialect and the name given to the Milanese preparation of tripe. This wholesome, hearty soup, which is made of tripe, beans, a variety of vegetables, broth and a touch of tomato purée, was popular in the countryside around Milan – a staple of the so-called “peasant” cuisine. For that reason, it’s not especially popular in restaurants but, come wintertime, a number of more traditional spots, like Antica Trattoria Salutati in the quiet Washington neighbourhood, will trot it out as a special.

Where to get it: If you’re craving tripe and don’t care how it’s prepared, head to Trippa in Porta Romana, where the ever-changing menu features unfussy renditions of tripe, sweetbreads and more. 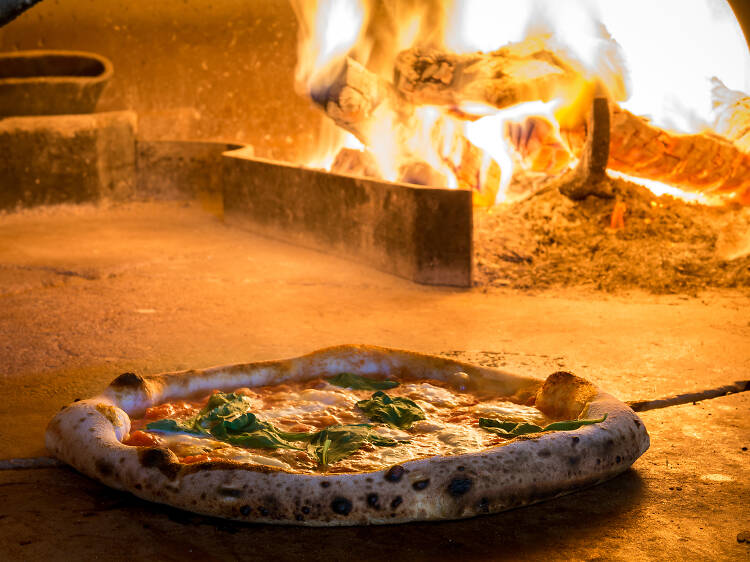 When the Expo 2015 swept into town, it brought along with it a focus on food that has led to a local restaurant and bar revolution. In terms of pizza, this has meant an influx of big-name Neapolitan players as well as a rise in homegrown artisanal offerings.