Even for Munich locals and loyalists, it’s what’s outside of town that captivates as much as the southern German metropolis itself. So when you’ve finished visiting Munich’s excellent array of attractions and things to do, take advantage of the city’s prime location and venture on a day trip.

The walled town of Rothenburg ob der Tauber is the quaintest, best preserved medieval city imaginable – and thanks to its thriving Christkindlmarket, the ideal winter getaway. With the Alps on the horizon, there are plenty of stunning mountain destinations and activities a short ride away too, from hiking and skiing in Garmisch-Patenkirchen to the vertiginous mix of Nazi history and pristine landscape at Berchtesgaden. The shattering legacy of the Third Reich continues at the Memorial Site of Dachau, Germany’s first concentration camp where 41,500 prisoners lost their lives.

With so many options, there’s only one thing for it – time to get out and explore. Head on one of these day trips from Munich and we guarantee that, one way or another, you’ll be profoundly moved.

RECOMMENDED: Full guide to the best things to do in Munich 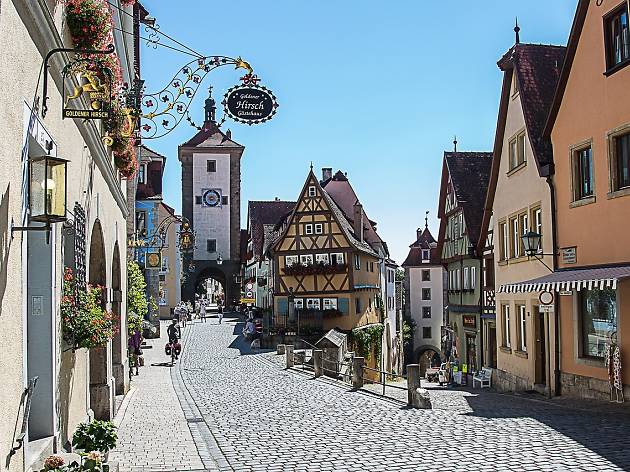 A little more than two hours north of Munich between Stuttgart and Nuremberg, this walled town is arguably the most authentic throwback to medieval Europe you can find. Behind the 14th-century city walls, you’ll discover a web of narrow passageways, half-timbered houses, stately towers and impressive churches, as well as the imperial castle, built in 1142. Thanks to immaculate preservation, Rothenburg unsurprisingly pulls in hordes of tourists, particularly in summer. If you can, it’s well worth staying into the evening, when the shuttle buses have left, the church spires darken against the twilight, and you can hear your footsteps echo down the cobbled streets.

Adjoining a gate tower, the half-timbered Landwehr-Bräu am Turm serves chilled beer and simple dishes in an idyllic spot a few paces down from Plönlein.

The Medieval Crime Museum explores crime and punishment in the Middle Ages with a fascinating display of notorious crime cases, witch-hunts and the often-gruesome devices used to extract confessions and inflict punishment.

For ultimate Rothenburg romance, book ahead at the Burg Hotel. Built into the city walls, it offers panoramic views across the Tauber valley, a beautiful cloister garden and 30 sumptuous, sun-lit rooms, many with four-poster beds. 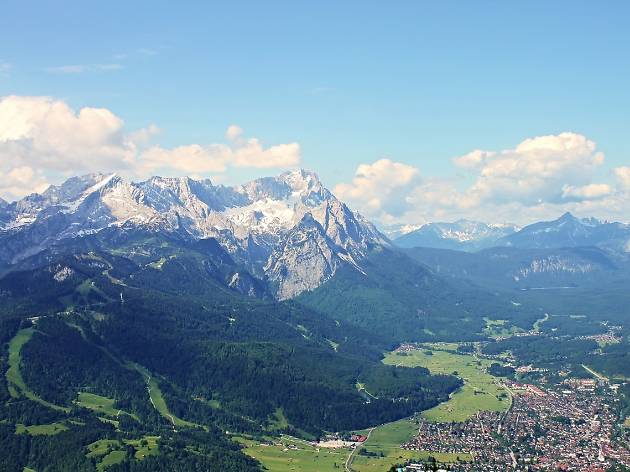 A one-and-a-half hour train ride from Munich, Garmisch-Partenkirchen lies just a few kilometres from the Austrian border. It was built in 1936, when Hitler ordered the settlements of Garmisch and Partenkirchen to be conjoined into a town big enough to bid for the 1936 Winter Olympics. Today, it’s one of Germany’s premier destinations for hiking, skiing and biking, as well as mountain spas. In addition to its particularly scenic location, the town features several traditional Bavarian houses adorned with elaborate murals and abundant window boxes.

Booking is a must at zum Wildschutz, a packed-out Garmisch institution which specialises in traditional Bavarian ox, boar, and deer dishes.

Combining a high degree of Alpine kitsch with Caribbean-inspired mixology and music, Peaches is one of Garmisch’s oldest – and kookiest – cocktail bars.

Take the cable car up the Zugspitze, Germany’s highest peak, promising a rousing dose of Alpine air as well as knockout mountain views stretching some 250 kilometres on clear days.

You’d struggle to find a more idyllic setting than the Hotel Eibsee, set 20 minutes out of Garmisch on the eponymous lake’s shore. It’s an enormous place, and the rooms are somewhat dated, but the food, service, spa and views are outstanding.

Take the lift up Alpspitze peak to the AlpspiX observation terrace. A major feat of design and engineering, it consists of two steel promontories reaching out a remarkable 13 metres from the mountain face in an ‘X’ shape. Prepare to feel your stomach flip as you look out at the Zugspitze and down a staggering 1,000-metre drop to the Höllental Valley. 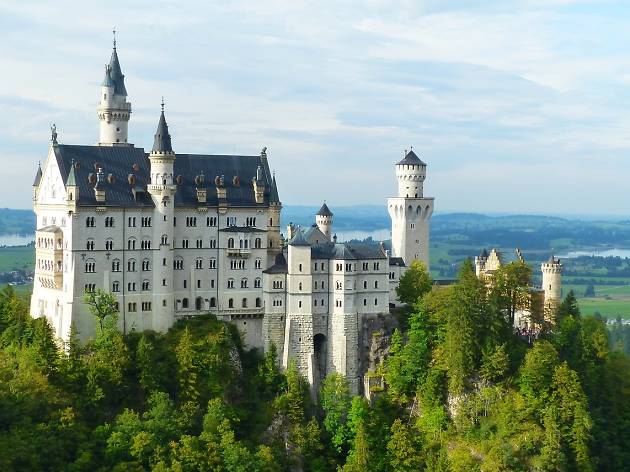 If you’ve seen ‘Chitty Chitty Bang Bang’ or Disney’s ‘Cinderella’, you’ve already seen something of Neuschwanstein – the ultimate outlandish project of Bavaria’s ‘Mad King Ludwig’. Built in the late 19th century on a rugged hill above the village of Hohenschwangau, the castle was conceived by the notoriously profligate Bavarian king both as his own private retreat and as a vast architectural tribute to Richard Wagner, of whom he was an ardent fan. Ludwig paid meticulous, microscopic attention to all details of the Schloss’s extraordinary external and internal design, which includes a Singers’ Hall, a Throne Room, a Grotto and several rooms inspired by Wagner characters.

With its façade of sweet pastels and a splendid mountain backdrop, Hotel Hirsch is more than a little reminiscent of ‘The Grand Budapest Hotel’. Inside, you’ll find two dining options: a ‘Bierstüberl’ pub and a more elegant à la carte restaurant.

In walking distance from the castle, Schlossbrauhaus Schwangau is a Bavarian micro-brewery which prides itself on quality ales and a friendly atmosphere.

With the serious footfall passing through Neuschwanstein every day, many nearby hotels have swapped charm and character for maximum turnover and tourist gimmicks. Hotel Villa Ludwig is an elegant exception, with 18 modern and stylish suites, all equipped with bathtubs, balconies and great views.

Get your classic Neuschwanstein photograph from the Marienbrücke, a historic bridge over the nearby Pollät gorge, and rebuilt by Ludwig as the ideal viewing platform for his castle.

Take the castle tour – it costs €13 and you won’t really see the Schloss without it. Tours are conducted in both English and German, with parallel audio guides in 16 other languages. 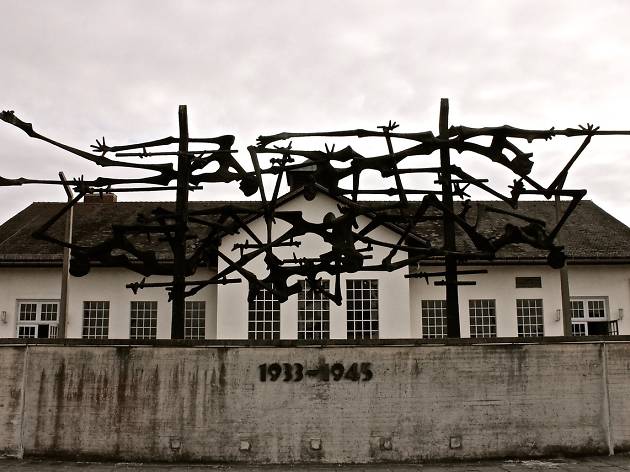 On March 22, 1933, a few weeks after Adolf Hitler had been appointed chancellor, a concentration camp for political prisoners was set up in Dachau, 16 kilometres north-west of Munich. It was the first such camp in Germany and served as a model for all subsequent concentration camps under the Nazi regime. In its 12 years of existence, more than 200,000 people were imprisoned here, including Jews, communists, political dissidents, resistance fighters, writers, priests and members of the Bavarian royal family. Some 41,500 were murdered. The Memorial Site on the camp’s grounds was established in 1965 by survivors. It includes chapels representing the various faiths persecuted at Dachau and a permanent exhibition which draws on first-hand prisoner accounts. Dachau is reached via a short S-Bahn and bus connection from Munich.

While Dachau will forever be overshadowed by its concentration camp, the town had a long and important history before the Third Reich. The 16th-century Schloss Dachau is a former residence of the Bavarian royals, set in prettily landscaped gardens, with a restaurant and terrace bathed in sunlight.

With just 28 seats, Weinraum combines a cosy atmosphere with a refined palette. It offers a selection of excellent Italian and Austrian wines, plus a great lunch menu.

Take the guided tour, which takes place in English every day at 11am and 1pm.

At Hotel Schwarzberghof, owners Claude and Nicole Drummer have gone out of their way to create a supremely comforting place to spend the night. The individual and homely bedrooms are filled with soft fabrics, fresh flowers and traditional Bavarian touches.

Take a moment to look up at the camp’s memorial sculpture by Yugoslav sculptor Nandor Glid, a haunting composition of skeletal figures and barbed wire forms. Glid considered the Dachau memorial the most important work of his career; his own parents died at Auschwitz. 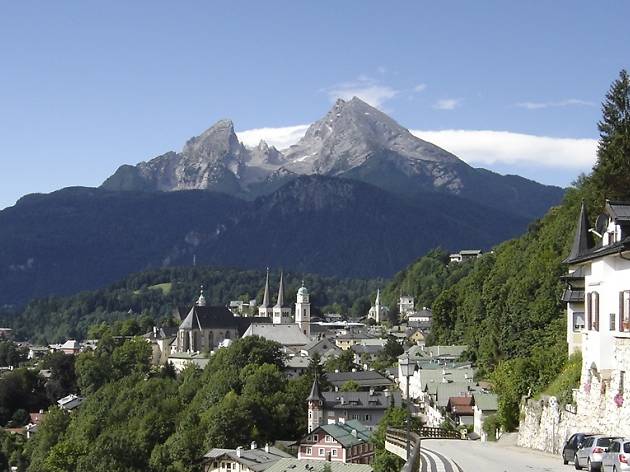 The Alpine retreat of Berchtesgaden offers a dizzying mix of pristine natural beauty and dark Nazi history. The Königsee is for many the crown jewel of Bavaria – a vast, emerald green lake nestled between sheer cliff faces, with the charming St Bartholomä pilgrimage church on a peninsula halfway down its western shore. Higher up, the Eagle’s Nest is a formidable Nazi construction, completed in 1938 and formally gifted to Adolf Hitler on his 50th birthday. A staggering 1,834 metres high, with an access road cut into previously impassable mountain terrain, it was conceived as a fortified meeting place and symbol of Nazi power, both to conduct top-tier meetings and to impress important guests.

It’s all about fresh flavours (and flowers) at BioHotelKurz, located in a 500-year-old farmhouse just outside Berchtesgaden. Owner Frau Kurz has won a crowd of loyalists with her delightful hospitality and excellent veggie dinners. Booking is a must.

For an idyllic coffee and an Eis try Eiscafe La Fontana, right in the scenic centre of Berchtesgaden. The ice cream menu includes some particularly kid-friendly creations.

Take a boat tour down the Königsee to the St Bartholomä church. The on-board trumpeter may sound like a gimmick, but just wait until you hear the crystalline, seven-fold echo off the lake’s surrounding rock faces.

Ten minutes’ drive from Berchtesgaden, Hotel zum Türken was built in 1911, seized by the Nazis in 1933, and occupied throughout the war by SS officers guarding Hitler’s private residence, the Berghof, built nearby. Reclaimed by the original owners after the war, it makes for a fascinating stay, so long as you can handle a lack of mod cons and some serious ghosts from the past.

Take the short hike up through the forest to the Königsee ‘Malerwinkel’ – a shady clearing among the pines with superlative views down on to the lake. 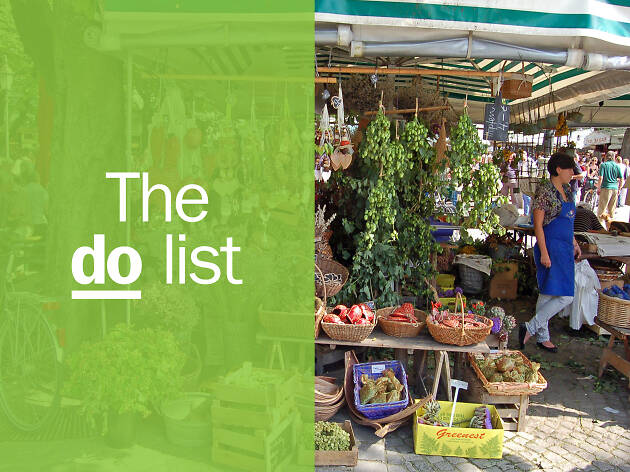 Sure, Oktoberfest always pulls in the crowds – in fact, it’s become a full-blown annual fixture for many of Europe’s party-hungry youth. But despite the free-flowing booze, Munich has long been considered hip and edgy Berlin’s oh-so-uncool southern cousin. Time to make up your own mind.