Kara Walker interview: “The whole reason for refining sugar is to make it white”

Monday May 5 2014
FacebookTwitterPinterestEmailWhatsApp
Advertising
Since her graduate-school days at the Rhode Island School of Design, Kara Walker has courted controversy with her provocative exploration of slavery in America and its connection to present-day issues involving race and gender. Her most notable efforts have been cut-paper murals, done in the style of old portrait silhouettes, depicting antebellum plantation life as a hellscape of violence and sexual abjection. Now Walker is about to unveil her first public artwork, commissioned for the former Domino Sugar Factory in Williamsburg, Brooklyn. The centerpiece of the project, which references the history of slavery in the 19th-century sugar trade, is a mammoth female sphinx created out of sugar. Time Out New York visited the artist on-site to get her take on the very bitter story behind the sweet stuff.

How did the antebellum South become such a major theme in your work?
I grew up partially around Stone Mountain, Georgia, and in that part of the country, there was always this aura of mythology and palpable sense of otherness about being a Southerner. I mean, Gone with the Wind was playing 24/7 at Ted Turner’s Omni Center in Atlanta. So it’s only natural that I found myself wanting to address the subject once I moved north for school.

How did the Domino Sugar Factory project happen?
[Presenting organization] Creative Time called to say that they had this great site for me, and Nato Thompson, the curator, mentioned in particular the molasses-covered surfaces left in the factory. The image of the tar baby popped into my head, and also this idea of a stickiness or residue that doesn’t go away. I wanted to draw a bridge between themes—not just between slavery and the sugar trade, but between industry and waste—spawned by the fact that molasses is a by-product of processing sugar. And for me, that represents a metaphor for identity formation.

You mean because the factory was originally built to refine brown sugar into white?
Absolutely. The whole reason for refining sugar is to make it white. Even the idea of becoming “refined” seems to dovetail with the Western way of dealing with the world.

How did you settle on using the symbol of a sphinx?
In Greek mythology the sphinx is a guardian of the city, a devourer of heroes and the possessor of a riddle that maybe can’t be answered. The factory is a modern-day ruin, and I think the sphinx contains the various readings of history that the place represents. But she also creates this aesthetic contrast of a white sugar object inside a dark, molasses-encrusted space.

You’ve depicted her in a highly eroticized manner, with huge breasts and an exposed vagina.
Well, yes, she’s a woman, a bootylicious figure with something paradoxical about her pose. She’s both a supplicant and an emblem of power. From the front, she seems to hold her ground. But what you see from behind is what happens when a nude woman bends over, raising a question of whether it’s a gesture of sexual passivity or not.

You’ve also given her a very stern expression.
One of the things I discovered while researching the history of sugar is that the packaging for molasses tended to relate back to slave lore. There was Brer Rabbit Molasses, for instance, and also an Aunt Dinah Molasses picturing a woman in a kerchief. But she wasn’t a smiling, cookie-jar mammy. She had a severe look with a furrowed brow and smirk on her face, so I guess I was thinking of that.

The title for the piece includes the phrase A Subtlety. What does that refer to?
It’s the name for sugar sculptures that were originally made for the tables of Middle Eastern sultans before being adopted by European nobility. A subtlety was a display of power and wealth to impress dinner guests.

So your sphinx is a giant subtlety.
Yes, but by being sexually overt, she’s not very subtle at all. She’s discomfiting. And as far as the riddle she poses, it’s maybe answered in her figure, though as I mentioned before, that only begets other questions.

The sphinx is actually part of an ensemble that includes a group of boys cast in molasses. What do they represent, and what’s their overall function within the installation as a whole?
They’re her attendants, her children. They’re laborers and supplicants, and yet also endearing portraits. They were based on contemporary gift items made in China.

How does this project relate to the rest of your work?
It’s a departure for sure. Not the end of the other work, just an expansion of my horizons. It still deals with the themes that interest me: race, gender, sex and slavery.

The same real-estate developer who will transform the site into condos is also a sponsor of your project. Do you worry that your work is being used as part of the gentrification process?
I don’t see how that could succeed. I have this fantasy that once the installation comes down, the sphinx’s presence will somehow remain. That people will remember something legendary happened here, and that the legend contained histories of sugar and of slavery, and representations of femaleness and sweetness. Sugar is so much a part of our world. It’s this kind of goddess who we give ourselves over to. 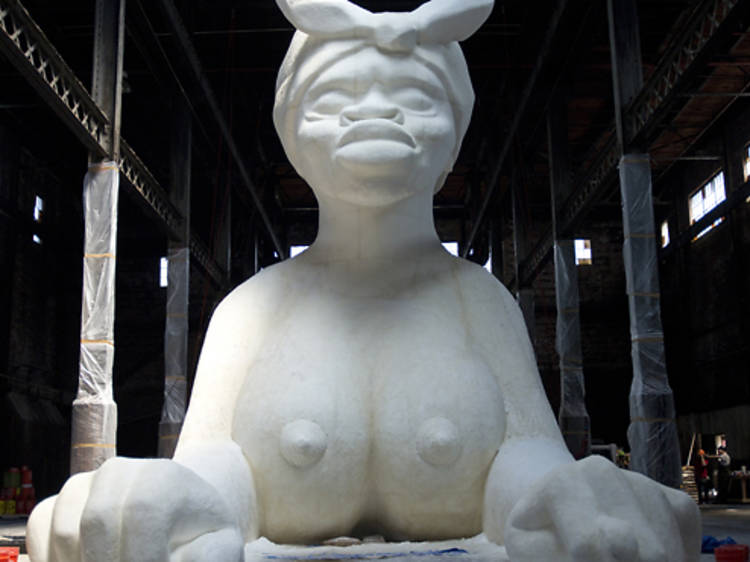 Kara Walker, "A Subtlety or The Marvelous Sugar Baby"

The very long subtitle of Walker's first ever public-art project reads an Homage to the unpaid and overworked Artisans who have refined our Sweet tastes from the cane fields to the Kitchens of the New World on the Occasion of the demolition of the Domino Sugar Refining Plant. While the word artisan is a bit vague, the subject of sugar is certainly in keeping with the artist's career-long investigation of the historical wages of slavery and racism. Sugar was a key leg of the so-called triangle trade that traversed the Atlantic between the 16th and 19th centuries, as European slavers brought their human cargo to the Caribbean in exchange for molasses, which was then transported back to the Continent to be made into rum. Meanwhile, the subtlety of the title refers to sugar sculptures that once adorned the tables of the rich and powerful in Medieval Europe—which, given the rarity and expense of the substance at the time, were meant as displays of wealth. Accordingly, Walker's project for the old Domino Sugar factory in Williamsburg, Brooklyn centers on a giant female sphinx made of the sweet stuff. Although the installation relates to the site's past, it retains a sphinxlike silence about the location's future as a complex of office and residential towers along the Williamsburg waterfront.