Marina Abramovic interview: ‘We've past the point where the performer is present’

Monday October 20 2014
FacebookTwitterPinterestEmailWhatsApp
Advertising
When people think of performance art, Marina Abramovic immediately comes to mind. Her MoMA retrospective, “The Artist Is Present,” broke attendance records, attracting some 850,000 visitors. Fresh off a new piece in London, Abramovic is readying a project at Sean Kelly Gallery that she hopes will put performance in the hands of the audience and change the form forever.

Your show at MoMA turned you into a public figure. Did that change your life?
It didn’t really, but it gave me added responsibility. I have the opportunity to do more work now, but people are looking at it differently. I have to think about how to deliver what’s expected of me, and that’s a new kind of pressure, whereas before, the pressure involved not being taken seriously or having performance dismissed as an art form. Now, it’s accepted as one, but I can’t let it affect my ego. I have to maintain a sense of self and be humble in the face of luck.

Didn’t the ball really begin to roll on all of that in 2002, when your performance The House with the Ocean View was included in an episode of Sex and the City. What sort of impact did it have at the time?
I didn’t know anything about the show. Sean contacted me and asked if I wanted to be part of it, and I said, “Not especially, but if they want to adopt it for mass culture, they’ll have to pay,” and they did. The most immediate effect came when I was in Amsterdam and a shopkeeper at the produce market said, “I saw you on Sex and the City. Please take these strawberries.” And I thought, Oh, my god, this really works.

How did you prepare for your main piece at MoMA, The Artist Is Present, which was basically a test of endurance?
It’s a mind-set, but there’s also a lot of physical preparation. For a year, I wouldn’t eat lunch or drink water at night so that my body could adapt to the situation.

How would you describe Generator, your piece at Sean Kelly?
When we frequent galleries, we see and hear. This piece blocks those senses. It puts the public in the space to experience something else, to experience other senses; smell, touch and intuition can come into place. I’ve created an environment where that can happen, and I’m very interested to see how people will react.

What happens in it?
A helper greets you and provides a locker to secure your belongings. You’re then given headphones and blindfolds to block out sound and vision. You’ll be brought into the space to experience the situation. The space, however, is completely empty. When you’re ready to leave, you raise your hand, and helpers will escort you out. Sometimes, I’ll be there, but other times, I won’t. When you leave, there’s a station for recording your experience that goes directly onto the Web. I’m very interested to see how people will react.

The piece sounds like it fits in with Joseph Beuy’s theory of social sculpture.
Yes, of course, but it’s also about how we’re dependent on seeing and hearing to the exclusion of our other senses.

The fact that the gallery is empty is also reminiscent of Yves Klein’s 1958 piece, The Void, at Galerie Iris Clert in Paris, where everything had been removed from the room, only you’re including people.
I’m a big fan of Yves Klein. There’s something about the immaterial that can really move you. It’s an energy that you can’t see or touch. We have to wake up the other senses. I want to put the public in a situation where can it perceive life in a different way. It’s a kind of brain spark.

Speaking of brain sparks, how’s your school for performance art, the Marina Abramovic Institute, faring? You started a Kickstarter campaign to fund it. Why?
I’ve been criticized for using Kickstarter, but I’m not Jeff Koons or Damien Hirst—I’m a performance artist. I’ve contributed everything that I can, but it’s still not enough to build it. I wanted to test the waters to see if there was interest in the institute in the first place. The people who contributed $2, $3 or $5 are the ones that I want to connect to. It’s my baby, so I have to give it everything, but it also has to be able to function without me in the future.

Is Generator an experiment in that sense?
Yes, exactly. In the piece previous to this one, I was at the Serpentine Gallery in London where I said good morning to the public at the beginning of each day and goodbye at the end. I had to be there, but in the last month, I began to realize that it was happening without me. So, at Sean Kelly, I’m putting the key into the piece and letting the public drive it.

They are the generator in the title then?
Yes. We’ve passed the point where the performer is present and the audience is just looking at something. Performance is a tool for self-development, where the public is the activator and performer. They can use this in their own life. 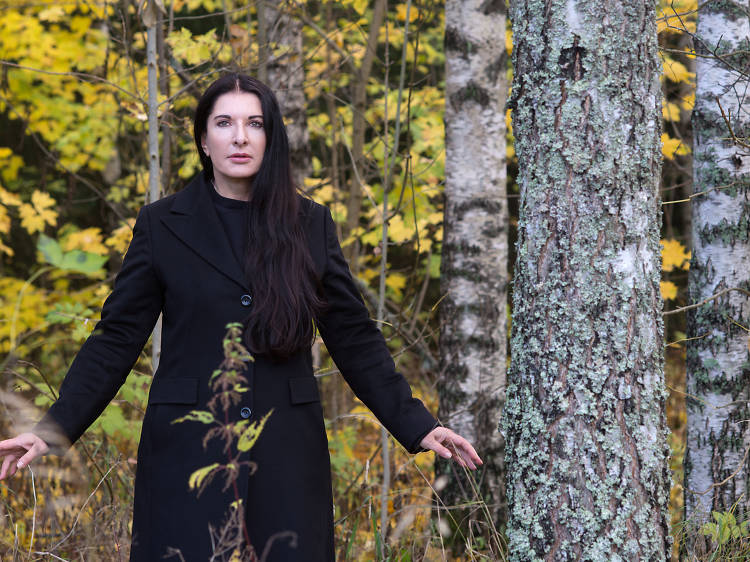 The artist will not be present in her latest piece, at least as a performer. Instead, visitors are invited to don blindfolds and noise canceling headphones, and enter the otherwise empty gallery where they can feel their way around until they're ready to leave. Upon exiting, they'll find a station where they can record their reactions, which will be posted online.