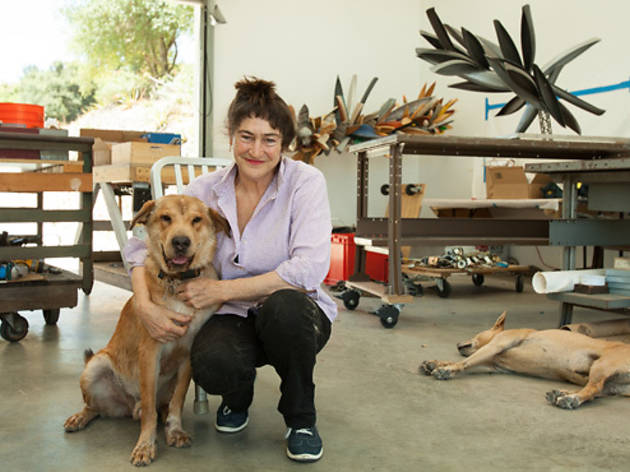 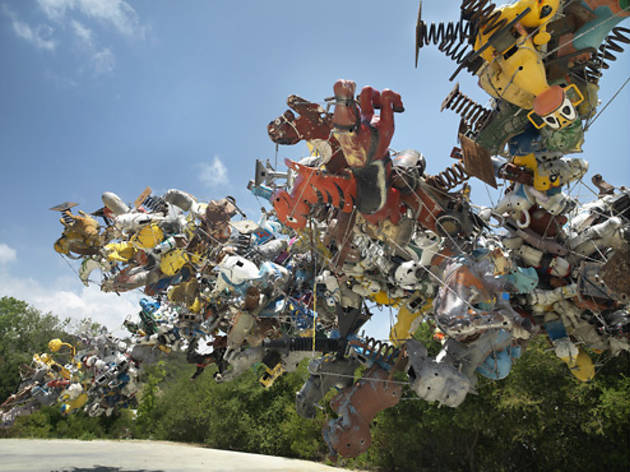 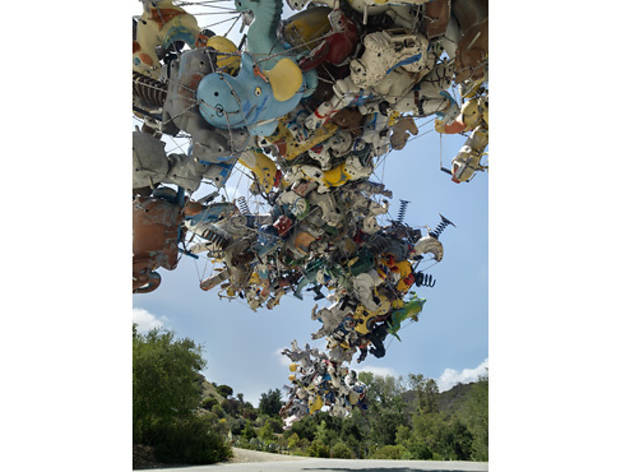 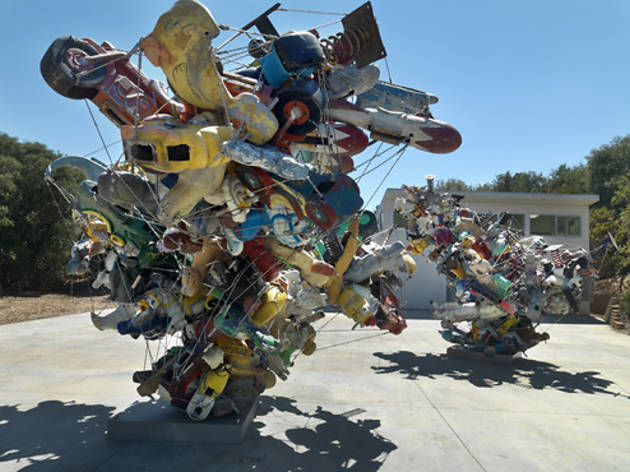 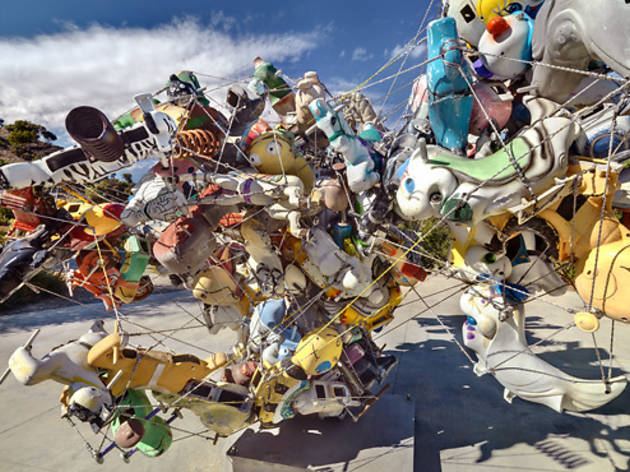 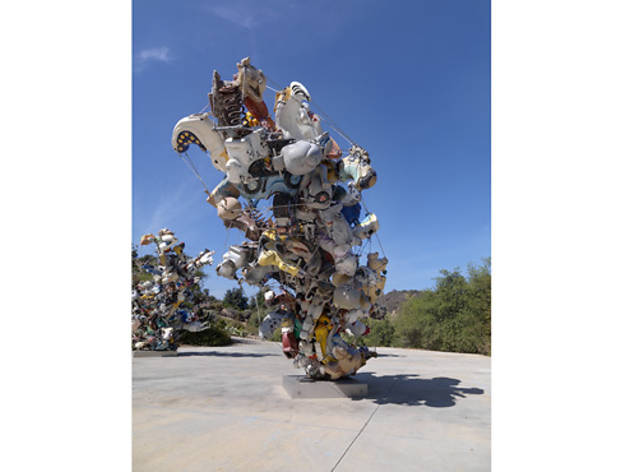 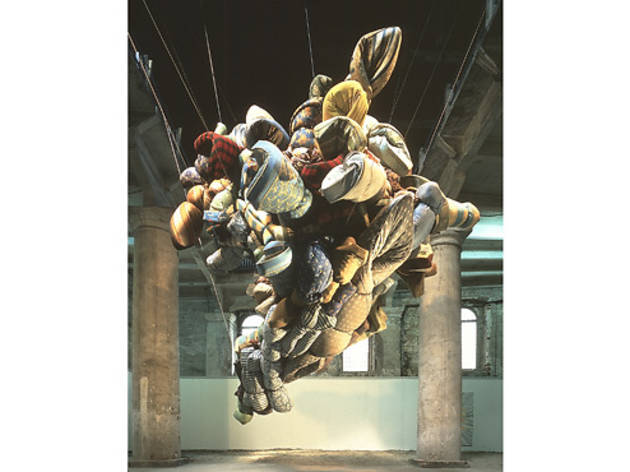 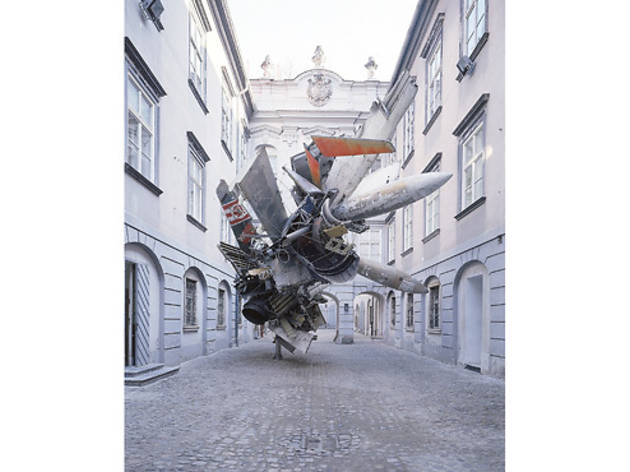 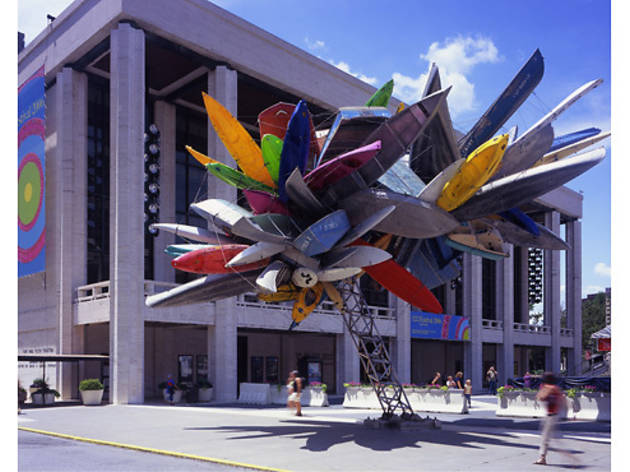 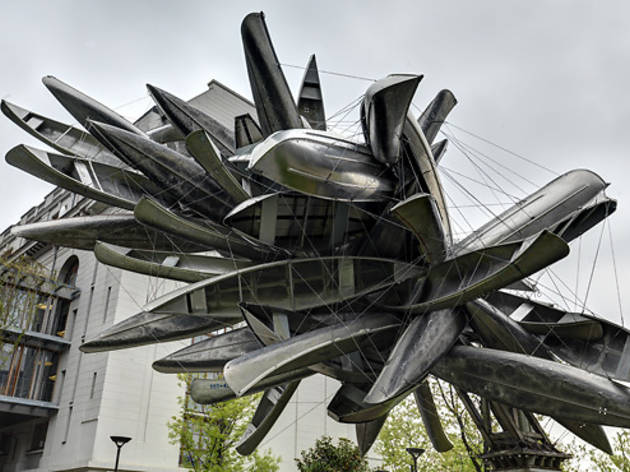 Appliances, mobile homes, aircraft fuselages and engines, canoes and water heaters—these are some of the materials Nancy Rubins has used to create her sculptures over more than 30 years, pieces whose ambition of scale and suspension into gravity-defying forms never fail to impress. She's rifled through sources from Goodwill to aircraft boneyards in the Mojave Desert to find her "palette," which, for her latest project, consists of recycled playground equipment, part of a new series titled "Our Friend Fluid Metal." Rubins recently spoke to Time Out from her studio and home in Los Angeles to expound upon aluminum and to explain that her work is unexplainable.

Your latest piece is made out of scores of these spring-mounted playground rides for kids in the shape of animals and toys, but what does the "fluid metal" in your title refer to?
They're made of aluminum, which is cheaper to recycle than to it is to mine, and when I bought them, they were probably an inch away from being melted down to be made into something else. And it started making me think about this aluminum and how I was finding it in this fluid state, between what it was and what it could be in the future.

Your sculptures are always immensely complex. What goes through you're mind when you're creating something like this latest piece?
All sorts of things. I keep thinking about the Surrealist Matta. I keep thinking about De Kooning. For me, the sculptures become three-dimensional De Kooning or Philip Guston paintings. This playground stuff comes in all different shapes, and after working with them for awhile, they become these wiggly little lines of color.

You've also suspended these huge items, like mobile homes, from ceilings and so forth, so they seem to be flying through space. How do figure that out?
I  sometimes used a structural engineer. Not always, but certainly in situations where you are suspending things above people's heads, you want someone like that working with you. Lately, I've been working with this fabulous engineer and he thinks there hasn't been anything built before like the structure we're using for this latest project.

How do you mean?
Well the piece cantilevers about 45 feet out from the wall. It's built around a stainless steel armature and suspended by this system of cables that runs throughout. It's as if you were looking at a painting that was deeply dimensional.

Did you build it on site?
It was built here in my studio, then taken apart and trucked across country and reassembled at the gallery.

Do you ever worry doing this sort of heavy-duty rigging, that someone might get hurt?
I work with really terrific people, really great riggers and crane operators and my crew is really great. They've been working with me for many years, and know what they're doing.

How much does improvisation figure into the process?
A huge amount. But I'm always clear about what I'm going to do before entering a situation.

Where do you keep all of this stuff when you're not making art out of it?
Well, that's the great thing about living in L.A., there's lots of storage space.

You've used a lot of different kinds of stuff to create your sculptures over the years, but you've  been consistently creating these enormous aggregation of things pretty much throughout your entire career. How did your approach evolve?
I lived in San Francisco, when I first got out of graduate school, and I had these friends I'd go with to Goodwill or the Salvation Army, because they liked to look for used clothes. They'd have these old televisions there-big massive pieces of wood and plastic-for 25 cents apiece. And I thought, Wow, even if they didn't work, for 25 cents, you're getting a quantity of material there, almost for free. I started collecting them, not sure what I was going to do with them, but I amassed almost 300 TVs. My plan was to build a piece on my roof, in the silhouette of the city skyline, and I was going to paint it fluorescent orange.

What did your landlord think about that?
He said forget about it, you're not going to do that. So I built the piece inside my studio, using a few dozen of them. I was very unsatisfied with it. I turned the TVs upside down and backwards, but the they never transcended their TV-ness, they never became something else. In my mind, in a really wonderful work of art, 1 plus 1 equals 3. I couldn't get that to happen. Also, it reminded me too much of the work of Louise Nevelson.

But it seems like that was the start of the collecting you do to create your work...
Yes. One thing led to another, and the objects started to evolve as I started working. When I found them, it was like finding caviar, and it was much cheaper than going to the art supply store, where you'd wind up paying a lot for just a tube of blue paint. For me, all of that stuff was like piles of blue paint.

But when you use water heaters or airplane parts for a piece, are they meant to evoke metaphorical associations?
Not at all. I'm always trying to draw the abstraction from things, like these springy doodads, which are sort of Pop-ish or camp; I'm trying to squeeze that Pop Art quality out of them, and make them into this other form.

So why do you choose the items that you do?
I'm making something I want to see, that pleases my eye. I look for materials that are really poignant, that are compelling to me. And if I could tell you why they were compelling to me, I wouldn't be a visual artist—I'd be a poet. 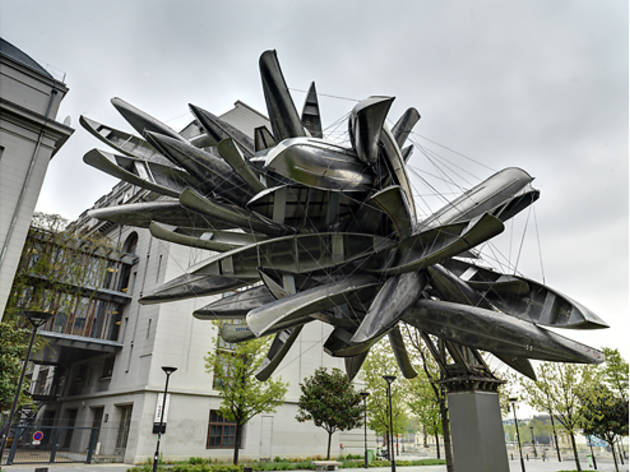 From more than 30 years, Rubins has been using mass quantities of mobile homes, aircraft fuselages and engines, canoes, water heaters and other detritus to create sculptural assemblages whose ambitions of scale never cease to astound. The results sublimate recognizable parts into an abstract whole that can evoke at times a tornado or giant blossom. Her latest works are created out of old playground rides mounted on steel springs that take such kid-friendly forms as carousel horses, cars and planes.