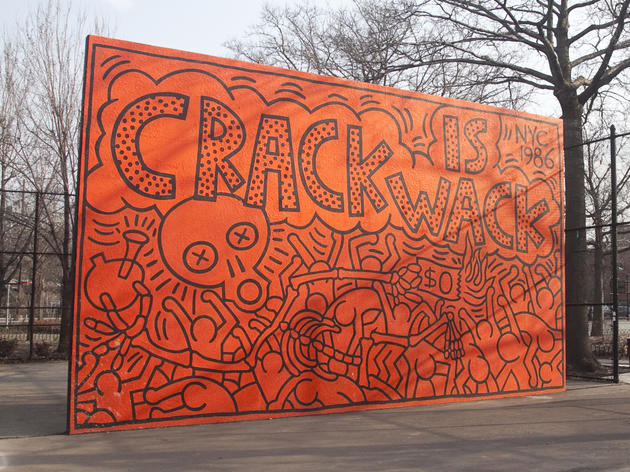 1/4
Photograph: Melissa SinclairKeith Haring, Crack Is Wack, one of the most iconic pieces of public art in New York 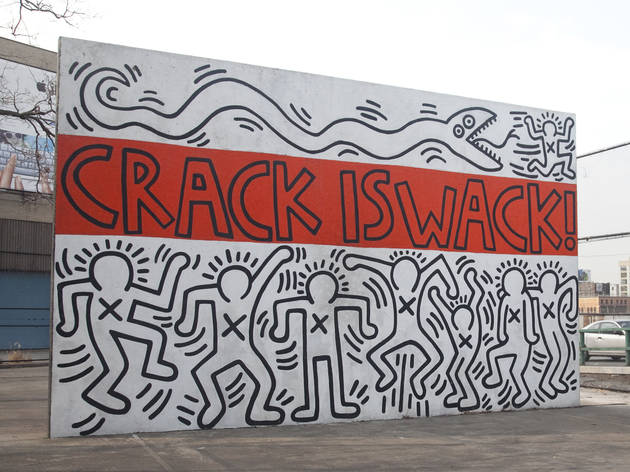 2/4
Photograph: Melissa SinclairKeith Haring, Crack Is Wack, one of the most iconic pieces of public art in New York 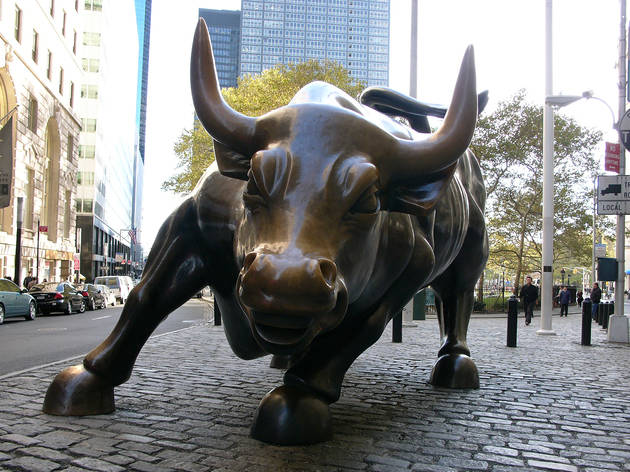 4/4
Photograph: Courtesy of Robert Graham StudioRobert Graham, Duke Ellington Memorial, one of the most iconic pieces of public art in New York
Advertising

Sure, New Yorkers make it a point of pride to never visit essential New York attractions like Times Square or the Statue of Liberty, but these ten iconic pieces of public art are worth seeing. From spinning the cube in Astor Place to cupping the Wall Street bull’s ahem, visiting these public artworks should be on everyone’s bucket list. Plus, find out the correct names (The Alamo and Charging Bull, respectively) for those two pieces—there’s no better feeling than correcting a tourist. Keep this list on your smartphone with our Foursquare list of iconic public art.

Alexander Calder, Saurien
With upward-facing spikes and broad arches extending out to claim public space, Calder’s bright red, mobilelike but static work holds its own despite sitting beneath the cantilevered corner of a skyscraper. The placement does nothing to diminish its striking monumentality and dramatic impact, which draws in passersby to interact and explore. While you’re here, check out other large-scale works in 590 Madison Avenue’s indoor sculpture garden, located just behind Saurien. Madison Ave at 57th St (212-334-2424, calder.org)

Arturo Di Modica, Charging Bull
A popular tourist destination and site of mischief for years, the Wall Street Bull—as it’s colloquially known—has been attacked with spray paint and markers, and even covered in yarn. Its Italian sculptor created the 7,000-pound bovine in optimistic response to the 1987 stock market crash, dropping it in front of the New York Stock Exchange overnight in 1989. It was removed by the city the next day, but reinstalled in Bowling Green after public outcry. Broadway at Whitehall St (chargingbull.com)

Robert Graham, Duke Ellington Memorial
It’s only fitting that a man who had such a profound influence on the American jazz scene is commemorated with a grand and enduring sculpture. Rising above the trees at the northeast corner of Central Park, the 30-foot-high cast-bronze icon is supported with columns topped by nine muse figures. 110th St at Fifth Ave (nyc.gov/parks)

Keith Haring, Crack Is Wack
The cartoonlike figures, bold letters and vibrating lines in this large mural are characteristic of Haring’s punk graffiti aesthetic. Covering both sides of an outdoor handball court’s wall, the work conveys the artist’s urgent antidrug sentiment and his belief in democratic art. The locale has become known as the Crack Is Wack Playground, and the piece is one of Haring’s last public artworks still visible in New York City. E 128th St at Second Ave

Robert Indiana, LOVE
One of the world’s most widely recognized and copiously replicated motifs began with three paintings in 1965. MoMA helped to popularize the design by commissioning it for use on its Christmas cards. The artist began creating these one-word poems in sculptural form in 1966, and a monumental, Corten-steel variation was displayed in Central Park for six weeks in 1972. New York’s current version—a 12-foot-high, red-and-blue iteration made from polychrome aluminum—has stood proudly in midtown since 2000. Sixth Ave at 55th St

Kristin Jones and Andrew Ginzel, Metronome
The winner of a national competition organized in 1996 by Public Art Fund to adorn a Union Square complex, this work dominates the area. But it’s been widely criticized for being, among other things, boring, ugly and confusing. Its digital clock, brick wall with gold leaf and slab of bedrock explore time, history and the city’s perpetual movement. A closer look reveals, reaching out from billowing steam in the timepiece’s center, a bronze hand taken from the George Washington statue in the facing plaza. One Union Square South, E 14th St at Fourth Ave

Forrest Myers, The Wall
The aluminum and steel installation claiming the greater part of a building’s wall at Broadway and Houston is minimalist in its simplicity but captivating in its massive scale and bright blue-and-green saturation. Commissioned in 1973 to camouflage the architectural imperfections in the edifice, its placement soon proved controversial as the building’s landlords strove to utilize the space for revenue-generating billboards. After being removed in 2002, the piece was reinstalled at a higher level in 2007 to allow for street-level advertising below. 599 Broadway between W Houston and Prince Sts (forrestmyers.com)

Isamu Noguchi, Red Cube
Painted a vivid shade and perched on one of its corners, this site-specific sculpture stretches vertically, in seeming competition with the towering buildings surrounding it. Noguchi combines art and architecture, pointedly emphasizing the setting: A gray cylindrical hole in the cube’s center offers a focused view into the building directly behind it. 140 Broadway between Cedar and Liberty Sts (noguchi.org)

Tony Rosenthal, Alamo
By now this work, more commonly known as the Cube, is as much of an East Village fixture as nearby St. Marks Place. The massive steel sculpture, weighing in at one ton, exists less as a visual attraction and more as a measure of physical aptitude. People come to spin it, just as the artist intended. Astor Pl, E 8th St at Lafayette St

George Segal, Gay Liberation
Upon first encountering Segal’s work, one perceives an everyday simplicity in the grouped figures of men and women interacting amid a bench-lined park’s serene environs. But as the work’s title conveys, there is a powerful message here as well, it was created as a tribute to the Stonewall Inn raid and ensuing riots of 1969, which unfolded nearby. Christopher Park at Sheridon Square, W 4th St at at Grove St (nyc.gov/parks)