Friends since high school, Patrick Miller and Patrick McNeil began their artistic collaboration as FAILE in 1999, postering and stenciling the streets of Williamsburg with their dense pop-cultural mash-ups of everything from kitschy religious imagery to true-romance comics. Since then, the Brooklyn duo’s work has been featured in galleries and institutions abroad, though similar treatment in the U.S. is only now forthcoming with a survey opening Friday at the Brooklyn Museum. The show includes their two major installations, Deluxx Fluxx Arcade, made with fellow street artist Bäst, and FAILE Temple, a sort of small churchlike structure originally created as an outdoor installation in Lisbon. Taking a break from the hectic business of installing the show, the artists offer some thoughts on their art, career and upcoming show, titled “Savage/Sacred Young Minds.”

RECOMMENDED: Full guide to the Brooklyn Museum in NYC

How did you guys meet?
Patrick McNeil: We met on the first day of high school and ended up being in art classes together. All through high school we shared sketchbooks and collaborated as friends.
Patrick Miller: We started FAILE when we were in college. We were exploring silkscreen and painting in the studio, and then started doing things on the street. The things that we were making in the studio started to go outside and the two ways of working began to inform one another.

Would you call yourselves street artists?
McNeil: It’s a symbiotic process. Our interest in fine art and street art work hand-in-hand. Once we moved to New York, the city became our canvas, and we started tailoring pieces for the sites we were using.
Miller: It evolved over time. We would silkscreen a work and wheat paste it up on wall somewhere. We sometimes used stencils, too. When we working out of town and ran out of posters, we’d rely more on stenciling or make other things on the fly.

Were you in contact with other street artists?
Miller: Yeah. At the time, it was a pretty small network of people. We knew WK Interact, Shepard Fairey, Banksy, BAST and Eine. All of us were traveling around and trying to bring things to a global level.
McNeil: What we were doing wasn’t even called street art yet. It was just this kind of urban phenomenon—people speaking to one another through a visual language. The scene was more intimate—Internet sharing hadn’t arrived yet. It’s certainly blown up since then.

How did wind up collaborating with BAST on your Deluxx Fluxx Arcade installation?
Miller: Well, actually we’ve been working with BAST since FAILE’s infancy. We’ve traveled together and collaborated on making quite a few pieces. We first did Deluxx Fluxx Arcade for a show in London at Steve Lazarides’s gallery. He’s the guy who reps Banksy. Originally, we thought of doing a basement lounge kind of thing, and that spawned the idea of doing a crazy video arcade instead. Some of our friends who do programming helped us out with creating the games.
McNeil: It came together quite organically. We went to London and built everything on site. It was different from anything we’d ever done. It incorporated digital media and music. It was noisy and fun.

What else can you say about BAST?
Miller: He’s a true artist. He’s not into the commercial side of art. He’s always exploring. We gel, even though our work is more about line and narrative-based and his is more punk and fly.
McNeil: There’s an immediate crossover and kinship to how we make work, but he just does it so differently. He was born and raised in Brooklyn—fifth generation—and quite a character.

What are the components that make up The FAILE & BAST Deluxx Fluxx Arcade?
Miller: The installation is divided into three sections: an arcade with video games, a room with pinball machines and a black-light area with two fussball tables.

You’ve previously mentioned the video games. It seems like you changed them quite a lot, especially the exterior cabinets.
Miller: We thought of them as sculptural forms to collage and paint on. A lot of the older arcades games have really wild shapes. It was really great, bringing them back to life. Initially, we didn’t think that hard about the games, but over time we realized that if the games had a real objective, people would play them longer.
McNeil: These days we relate the games to the cities where we exhibit the arcade. For example, in Miami the games made references to drugs. For Brooklyn, we have a game about alternate side of the street parking, and another one about gentrification, where you’re tearing down brownstones and putting up new buildings, A lot of our work it’s like that: playing with stereotypes and subverting them.

You seem to have done something similar with the pinball machines and fussball tables.
Miller: Yeah. But in those cases, the games are totally analog, so we’re just transforming them visually. Like, the room with the fussball tables is this insane installation with lots of visual stimulation. It’s wallpapered floor-to-ceiling with hand-painted black-light posters.

Another installation featured in the the show is this sort of small ruined church, which you’ve titled “Temple.” What’s the backstory on that project?
McNeil: It came about because we were invited to include something in Portugal Arte 10, a biennial in Lisbon. When we started to do research on the project, we began to discover all of these traditional Portuguese crafts—ceramics, metalwork and mosaics—used to decorate the local architecture, which is festooned with different motifs. That got us to thinking about our own iconography, so “Temple” became this kind of sacred monument that used an old language of signs.

It looks very multi-cultural. What were some of the sources that inspired it?
Miller: It’s taken its inspiration from both Lisbon and Brooklyn and other places we’ve been. We once did a show in Shanghai, so there’s some Chinese influences in the piece. Same for the Native American motifs; they came from another one of our exhibitions. We’re always pulling from different cultures and making hybrids of what we find in our own vocabulary. We think of FAILE as a cultural melting pot—kind of like New York City.
McNeil: It was a bit daunting, because in order to build “Temple,” we had to be architects and engineers, as well artists. We always thought, Wouldn’t this look great at the Brooklyn Museum? And now it’s actually there!

You’re also showing some new paintings, right?
Miller: Yes. The new canvases in the show go back to an earlier style that we called “ripped paintings,” which we wanted to revisit. They were the basis of the aesthetic that informed both “Temple” and “Arcade.”
McNeil: A lot of our work is about taking these pieces and reconstructing them to tell stories, like a tapestry.

But why do you call them “ripped paintings?”
Miller: It comes from seeing the way our pasted images would get torn and weathered over time. Then we starting to add new posters and prints on top of them, which created this layered effect.
McNeil: They’re painted pictures that give you the illusion of being ripped and torn, but they’re actually trompe l’oeil. They’re a way of juxtaposing old and new images, giving them a new context, a new life. 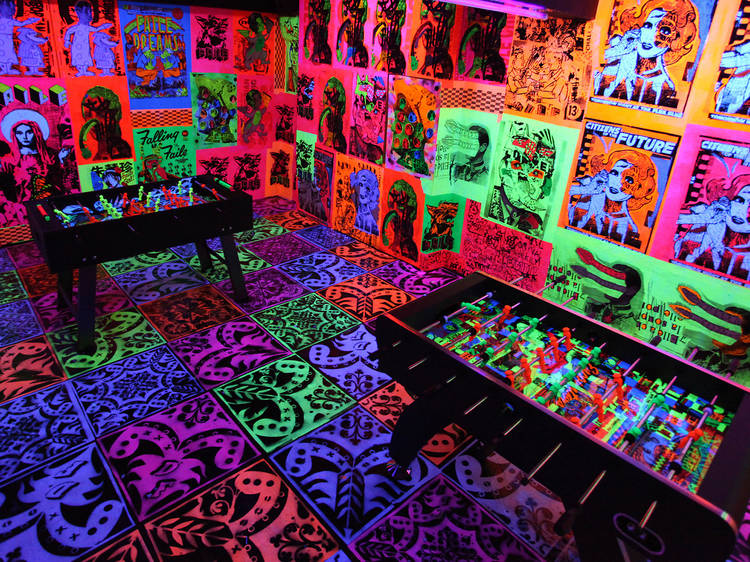 Courtesy of the artists. © FAILE

As the careers of Keith Haring and Jean-Michel Basquiat show, the street can often be an avenue into the art world, something certainly true for Patrick McNeil and Patrick Miller. Their work consists of dense collages of pop-cultural imagery, a riot of bold colors and lines melded into a graphic synthesis of true romance comics, pulp-fiction covers and religious kitsch.