Sure, you’ve sipped the brown stuff as you chowed down on BBQ or sampled it in a spiked frozen drink, but how much do you really know about bourbon whiskey? We’re here to help with 20 surprising, silly and even stupid facts about the brew, along with a recipe for mixing your own Manhattan cocktail. Now you have all the talking points you’ll need for showing off at happy hour.

Things you didn't know about bourbon

While 95 percent of the world’s bourbon is distilled within the Bluegrass State, no law requires the spirit to be produced there. Actually, in the past decade, craft distilleries across the country have cashed in on bourbon’s surge in popularity—though many loyalists still believe the best bourbon is Kentucky born.

In response to 1791’s Whiskey Rebellion, George Washington decided to incentivize disgruntled, tax-evading settlers to move southward to Kentucky, then still part of Virginia. The governor, Thomas Jefferson, doled out 60 acres of land to each Pennsylvania transplant who agreed to produce “native corn” (i.e. American whiskey) on their land. Ever the Francophile, Jefferson christened the new settlement Bourbon County after the French Bourbon dynasty, which held court over Spain and most of Italy in the 18th century. Once the whiskey started flowing, distillers began shipping their wares down the Missouri and Ohio rivers, stamping “Bourbon County” on each barrel to mark its origin and ultimately giving the drink its permanent name.

Despite its boozy roots, bourbon’s birthplace had been dry as a bone since the signing of the Volstead Act in 1919. It remained liquor free until 2014, when a small independent distillery called Hartfield & Co. opened its doors in downtown Paris, the county seat.

In accordance with federal regulations, all bourbon whiskey has to be aged in brand-new, charred oak barrels that must be discarded after the aging process is complete. Most bourbon distilleries sell their used barrels to other alcohol producers when they’re done, accounting in part for the recent plethora of bourbon barrel-aged craft beers on the market. 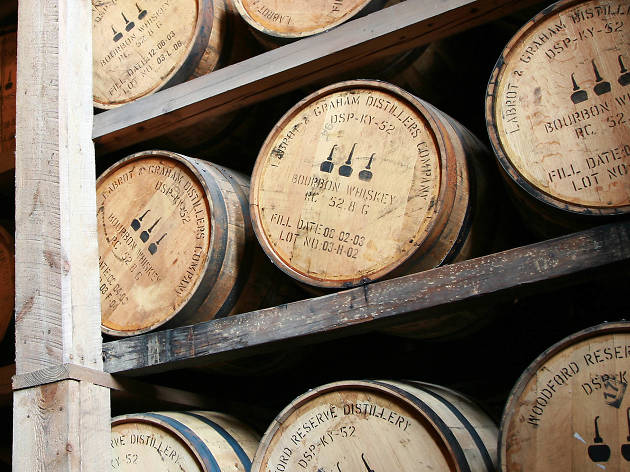 The numbers don’t lie, folks. As of 2014, the population of Kentucky hovered somewhere around 4.41 million, while the barrel count topped out at 5.6 million. It makes you proud to call yourself an American, right?

While straight bourbon has to be aged for a minimum of two years, properly distilled corn whiskey is still considered bourbon even if it only touches the inside of the barrel for a few seconds before being bottled. You won’t find many distillers using this loophole, though, since any bourbon aged for less than four years must be labeled as such, lowering its market value.

On May 4, 1964, Congress adopted a resolution declaring bourbon a “distinctive product of the United States,” stating that no whiskey produced outside the country can be labeled bourbon or sold as bourbon within the United States—cementing the patriotic liquor’s role in American history. Soon after, the Federal Standards of Identity for Distilled Spirits set forth a series of strict guidelines distillers must abide by in order to label their whiskey “bourbon.” This is serious stuff, you guys.

Federal regulations state that all bourbon mash (that’s the part that provides the sugar) must be comprised of a minimum of 51 percent corn, helping to keep America the No. 1 worldwide maize producer. What’s more, the regulations also prohibit distillers from incorporating any added coloring, flavoring or other spirits into bourbon, making sure whiskey stays as clean as a whistle.

Depending on cellaring conditions, three to four percent of bourbon naturally evaporates during each year of barrel aging, resulting in a net loss of about one-third of the total product after seven to nine years. This portion is called the Angels’ Share, said to have escaped up to heaven to satiate the divine drinkers above. 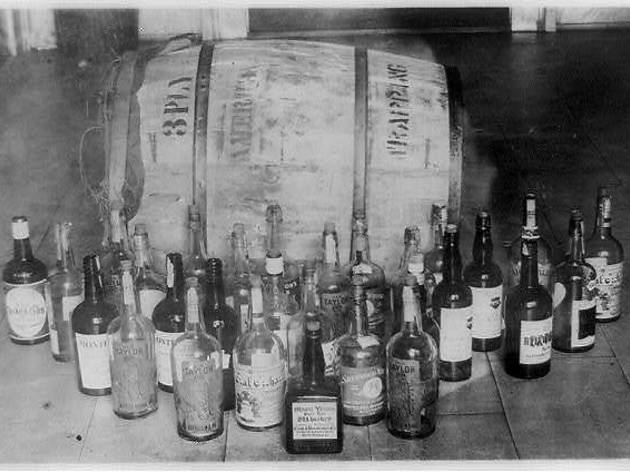 Despite their hard-nosed attitude toward alcohol consumption, the temperance-minded U.S. government did allow for some exceptions to the Volstead Act. For instance, rabbis and priests could get regulated quantities of wine for religious practices and small amounts of bourbon could be purchased if the buyer had a medical prescription. This important exception was often the only thing keeping many Kentucky distilleries afloat throughout the thirteen difficult years of Prohibition.

Lady Randolph Churchill, the American-born mother to former Prime Minister Winston Churchill, is credited as having invented the Manhattan cocktail, a mix of bourbon or rye, sweet vermouth and bitters. According to legend, Jennie, as she was commonly known, had the drink commissioned in honor of New York governor Samuel J. Tilden’s victorious 1874 election (though the timeline is heavily disputed).

NBC is hard at work developing The Bourbon Kings, a television pilot based on J.R. Ward’s popular set of novels detailing the everyday dramas of a wealthy Kentucky family who struck it big in the bourbon industry. And that’s not all—Fox has also moved forward with a bourbon-centric series. It’s still untitled, but it will reportedly focus on an elite Kentucky bourbon family and will be produced by Hell on Wheels’ Bruce Romans.

The next time you pick up a bottle of Old Grand-Dad bourbon, check out legendary distiller Basil Hayden’s mug on the label. Raymond B. Hayden began producing Old Grand-Dad in 1840 in Clermont, Kentucky, naming his brand after his grandfather, Basil Hayden, a well-respected figure in bourbon history. 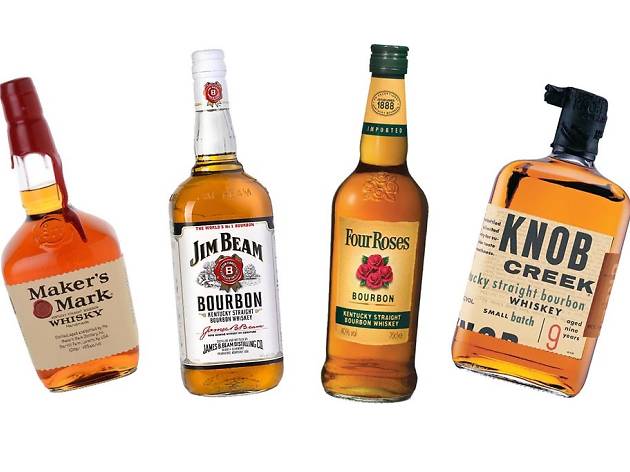 Think your bourbon on the rocks comes from old-school Kentucky elites? Think again. While bourbon must be produced in the United States to legally be considered bourbon, several Japanese corporations now own a significant portion of Kentucky’s distilling industry. The world’s No. 1 best seller, Jim Beam, was purchased by Suntory in 2014, adding to a portfolio that also includes Maker’s Mark, Knob Creek and Basil Hayden’s. And Kirin, another Japanese liquor company, has owned Four Roses since 2001.

Though both spellings are technically correct, only the U.S. and Ireland commonly incorporate the “e” into the word. Every other whiskey-producing country in the world drops the “e,” preferring to use the more traditional “whisky” spelling. The origins are contentious—some say the variations derived linguistically, like the difference between “color” and “colour,” while others attribute the historical split to the different types of whiskeys being produced regionally.

Southerners love their bourbon, and great American novelist William Faulkner, who fueled his late-night writing sessions with the good drink, was no exception. “Civilization begins with distillation,” the bard of Oxford, Mississippi, once said, and his favorite bourbon cocktail was (in true Dixie fashion) the Mint Julep, which he would make by combining bourbon with one teaspoon sugar, crushed mint and ice, served in a chilled metal cup. (That very cup is now on display at his former home of Rowan Oak.)

It might be news to you that registered trademarks can cover more than symbols and words, but it’s certainly no longer news to the folks behind Maker’s Mark, which has had its signature wax seal under federal lock since 1985. In 2003, Maker’s Mark sued Cuervo’s parent company, Diageo North America, arguing that the wax seal of Reserva de la Familia tequila violated trademark infringement under federal law. The judge ruled in favor of Maker’s Mark, and though Cuervo appealed, a second court upheld the original ruling in 2012, sealing its fate as liquor’s only bearer of dripping red wax.

This age-old pain relief method is tempting when you’re dealing with a teething baby, but don’t do it—you might get arrested. Last November, an Arkansas mother was charged with child endangerment after her 10-month-old son was found unresponsive and rushed to the emergency room with a blood alcohol content of .19. The woman admitted to filling the toddler’s bottle with bourbon in an effort to alleviate his teething pain, proving that some old wives’ tales are definitively meant to stay in the past.

Until the late 1880s, cocktails were sipped through a hollow stalk of ryegrass, often leaving an unpleasant residue as it deteriorated. One fateful day, however, Washington, DC, resident Marvin Stone was sucking down his freshly made Mint Julep and contending with the faulty piece of grass when it occurred to him that even paper would do a better job. He began by tightly wrapping several strips of paper around a pencil, then he removed the pencil and glued the papers into a sturdy cylindrical shape. Stone’s ingenious tool immediately caught on with drinkers around the country, and in 1888, the inventor patented a version made of paraffin-coated manila.