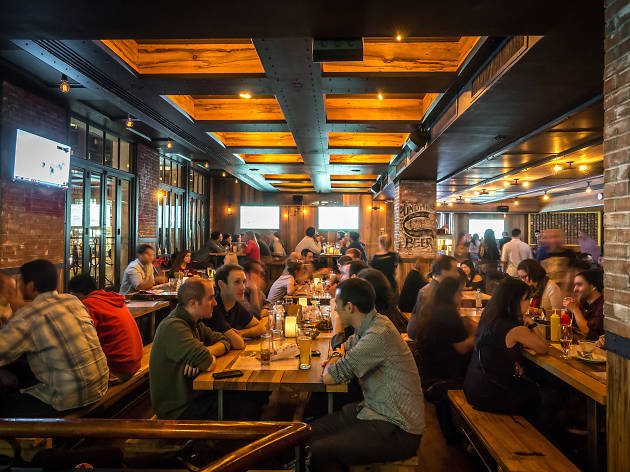 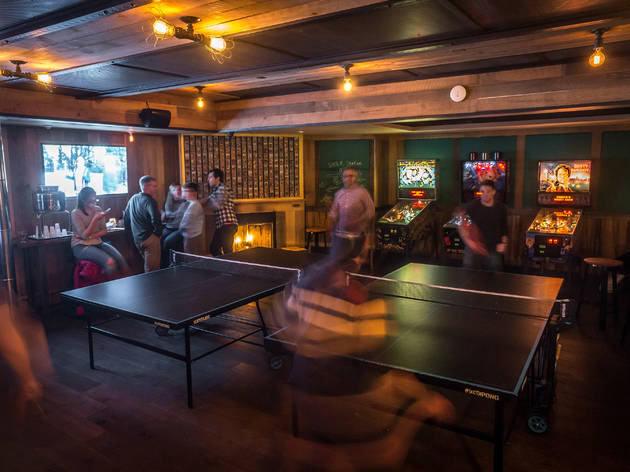 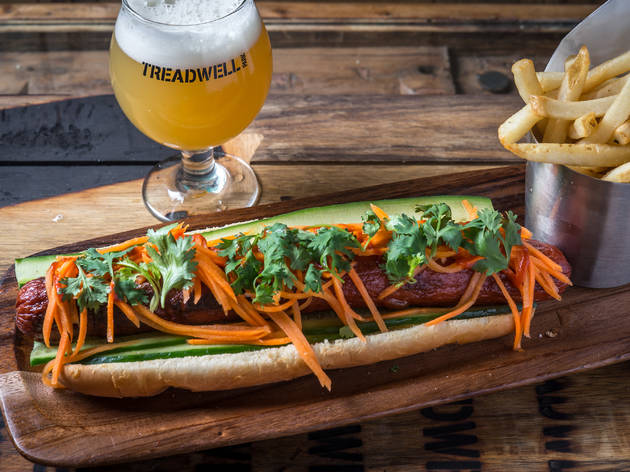 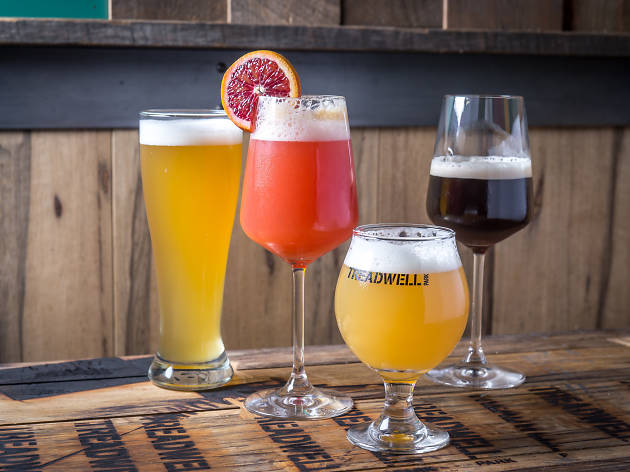 With large-scale brew operations like Clinton Hall in the Financial District and the Watermark Bar at South Street Seaport, Abraham Merchant has a finger firmly planted on downtown’s beer-hall scene. His Merchants Hospitality’s first foray uptown comes in the form of this rustic, 200-seat tavern, fitted with the requisite communal tables, a roaring fireplace and brick-painted murals by Colombian artist Brian Boerner that depict an imaginative world of beer-inspired mascots (flying dogs coursing over a beer-splattered ocean, a lab of mad scientists brewing beer mixtures). Traditional big-group boozing is the name of the game here, complemented by an expertly curated lineup of global pours, and plenty of beer floats.

ORDER THIS: A rotating selection of 20 beers is overseen by certified cicerone Mikey Fishbone and tapped through an on-site flux capacitor to balance the ratio of nitrogen and carbon dioxide in each pour. Throw back drafts both local (the citrus-blasted Chronic Myopia IPA from Threes Brewing in Brooklyn, $8) and far-flung (the refreshingly crisp Jever pilsner, brewed since 1848 by Jever Frisian Brewery in Germany, $8). Beyond basic pours, the menu showcases four scoops-and-suds floats: a Banana Split ($14) spikes chocolate goat’s-milk ice cream with the widely acclaimed ’nana-whispered Weihenstephaner Vitus (named the World’s Best Beer at the 2011 World Beer Awards), while the Mosher ($14) offsets Other Half Brewing’s tropical Hop Showers with house-made bleu-cheese-and-stout ice cream.

GOOD FOR: An upgrade to your crew’s weekly game night—whether that means watching or playing one. When not taking in the football, basketball and hockey options screened on a dozen or so TVs around the bar, head to the games-dedicated nook where intrepid contenders combat in pong (both Ping and beer) and pinball (themed machines include Dirty Harry and Metallica). Adding fuel to those brew-soaked activities are complimentary self-serve popcorn and an upbeat dad-rock soundtrack of Led Zeppelin and Lynyrd Skynyrd.

THE CLINCHER: The hearty pub grub from chef Stephen Lyle (Village) expands from beer-bar standards like crispy wings ($12) and a Pat LaFrieda burger with Nueske’s bacon ($14) to include more oddball offerings, such as a banh-mi-inspired hot dog cradling an all-beef Nathan’s frank with pickled carrots, cilantro and sriracha ($12). Between the boozy floats, cheeky snacks and bar games, you can tread well in these waters.