Amar Ramasar has been nominated for his body of work with New York City Ballet, where, having performed there his entire career, he has danced as a principal since 2009. Ramasar is an engaging, expansive interpreter of both new ballets (by Justin Peck, Peter Martins and Alexei Ratmansky) and the modernist Balanchine works at the root of the NYCB catalog; recently, Ramasar's work in Peck's Rodeo: Four Dance Episodes emphasized his technical virtuosity alongside his tangible—and infectious—joy in performing.

When did you begin studying ballet?
A close family friend (I consider him an uncle) showed me a video of George Balanchine's Agon—and I just said, 'I'm going to do that someday.' I was 13. That's when I took my first ballet class; before that it had just been salsa dancing, hip-hop, baseball!

What was it about the Agon that appealed to you?
I was just intrigued. The opening alone—just the feet moving, those turning out, flexing movements. I related to it; to me it was hip-hop, it had that vernacular. I think too in the pas de deux that the relationship with the woman, that power and intensity really drew me in. I'm blessed to perform that piece pretty often.

After so long in the company, what do you feel you're still working on?
Believe it or not, Ive gone back to basics. It's a weird thing but I've really put an emphasis on getting better at classical ballet. Growing up in the Bronx and having a Puerto Rican mother, I love merengue! Ballet is not my natural calling—but I'm going back to it, and it's helping me grow.

What are your most treasured roles?
At NYCB you are doing a different thing every night—in 15 years in the company I've found something really valuable in every new work I've done. Obviously there have been great works by Ratmansky, Peck, Mauro Bigonzetti, my director Peter [Martins], Balanchine and Robbins. It's a great problem to have!
This season alone I've obviously had the great pleasure of doing Rodeo with Justin Peck. It's one of my favorite roles, especially being part of that creation;15 of us guys going full throttle, and still it also contains that male and female relationship. He shows such a range of emotions just in this one ballet! It's unparallelled. I also just did The 4T's [Balanchine's The Four Temperaments]—we always say that for a dancer, Balanchine just makes sense. The body, everything about the movement and the music: they all feel right.

Are there roles you still dream of?
I think about the Balanchine classics—Diamonds, maybe Apollo—and, also…Aladdin on Broadway! [Laughs] I do have ideas of Broadway, and I'm interested in Bollywood films too—my Trinidadian side comes out, and I found I had an interest in that. I'm open to everything! I'm so intrigued by everything. I'm never bored.

Do you have a most memorable moment from this season?
I think it comes back again to Rodeo. We lost Albert Evans [the NYCB ballet master who died suddenly in June] recently and he was the hugest spirit making that ballet. We performed Rodeo on the day of his memorial, and I think we all, everyone, especially on stage, felt him there. It was the first time without him watching us, and we still felt him. His spirit is going through all of us in this building.

Do you have a performance philosophy?
Dance has just given me so much. I'm a boy from the Bronx, a boy from a poor family—and the musicians I've met, the places I've seen…dance has enriched my life to an amount that's indescribable. So that love for it is why I do it; it's the reason I have to give it all of me. Everyone needs that kind of love, and it needs to be shared.

Do you have a preshow ritual?
Yes! I share a dressing room with Joaquin [De Luz]. We're in dressing room eight, which was Baryshnikov's dressing room—nice, right? Everybody jokes that it should be called 'Club 8.' We blast music! The music that comes out of here, you can hear it on all the floors. We play it all from Motown to today's hits to rap—you'll find everything you want! But really, music—it gets you ready, and it touches the heart. 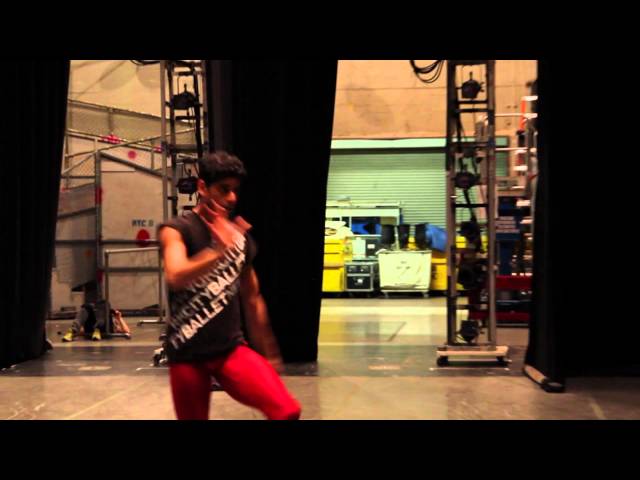