Andrew Champlin and Alexandra Albrecht have been nominated as a duo for their performance in Jillian Peña's modernist Polly Pocket: Expansion Pack, a rhythmic, repetitive work that asked the pair to become candy-colored clones—mirroring (and then fracturing) each other's movements, chanting numbers and multiplying into further, often projected, images of themselves. Peña's rigorous construction demanded a huge amount from the two dancers; the obsessively synchronized, balletic sequences and nonstop movement were deliberately taxing—so much so, in fact, that the set included an onstage watercooler.

How long have you been dancing?
Andrew Champlin: I started dancing when I was four, so that's 25 years this fall. I started in classical ballet; I went to arts schools in Portland, where I saw Russian character dancing, flamenco and tap. When I was 17, I came to New York to study at the School of American Ballet.
Alexandra Albrecht: I started dancing when I was 12, which is relatively late, at a local studio in Baltimore. I trained there for a year and half, before auditioning for Baltimore School of the Arts—I was accepted because, at the time, I had the kind of malleable bones and body they believed they could form into a ballet body. That wound up not happening.

How did you turn away from ballet to the modern work you do now?
Andrew Champlin: I guess I hit a hard wall with ballet. There were a couple of things that were mutually preventing me from following that path—I'm on the small side for men, so aesthetically that was always a little tricky, and I started relating less and less to the narratives. So I wound up going to a program at the New School where they had a budding dance program. I saw this piece by Jérôme Bel called Pichet Klunchun and Myself where he's interviewing this classical Thai dancer about his experience. There was no meaning obscured by unnecessary innuendo, yet it was beautifully articulated, constructed in a way that was a spectacle. I related to theatricality without the limitation of virtuosity.
Alexandra Albrecht: When I was applying to schools, I was originally looking at arts administration and only three schools for dance—but then I wound up dancing at NYU for three years, and I spent a summer abroad at the Salzburg Experimental Academy of Dance. That school was headed by Susan Quinn, who had been with Cunningham. And that brought in people from all over—it was a wide spectrum. That was a really big turning point for me.

How did you build Polly Pocket?
Andrew Champlin: Jillian [Peña] was really excited about the possibility of building the piece each day, always working forward: what we had at the end of the day was the beginning of the next day. In the piece we count out loud, and we start going down to zero—and with this piece, we started at zero in a lot of ways. Everything pushes forward in this make-believe time that we've established. That method resulted in a piece that's 80 percent on relevé; it's so physically difficult, we had to insert some moments of rest somehow! Then those rests became moments of intimacy for Alex and myself. What came from these moments would initiate these conversations that Alex and I have in the piece.
Alexandra Albrecht: Polly Pocket isn't making fun of ballet; it's very earnest because we're very honest in our attempt to achieve the marathon, to make it through. That's what's really hard about it. We know what “right” is. So we're sincerely trying to do the moves well and technically and perfectly. Jillian does love relevé! But it's so funny about this piece, the process was entirely collaborative. Three years in it's still so hard, but we created the monster! A lot of the movement comes from us, from our bodies.

What is your most memorable moment from the production?
Andrew Champlin: I'm always really captivated by the lighting [by Kathy Kaufmann] in the show; it creates a lot of shadow-play on the walls. The piece is very isolating to perform, since we're not looking at the audience. In Polly Pocket, the audience peers over a short barrier, and we don't look them in the eyes. So the moment that stands out most for me comes about 30 minutes into the piece. We're doing this series of kick turns while holding hands—Alex swings front, and I'm facing her while she's on relevé. I promenade her in this awkward position where her leg is on my chest, and I see the light glistening on her face. It's a moment when I get completely lost in her image. It's the first moment I partner her; before this, she's been the active member. And at this point, I see her openness to being there—and it gives me the confidence and power to get through the task ahead.
Alexandra Albrecht: [After she hears what Andrew has said in response to the question] That's what this dance is like! The two of us are so emotional…
A moment for me is a section that we call “ballet class”—three quarters of the way through, when Kyli [Kleven, who appears as another “clone”] has joined, and we're synchronized, holding pinkies. There's a big music and lighting change, and we go back to basics, to this lush, lovely music, and it's almost at the end; we can feel we've almost made it. It's like we're performing these little tools, these exercises that will enable us to continue.
There's also a part in the beginning when we're counting: when we get to 31, we break the counts and face into each other and pause, touching hands, looking into each other's eyes. We're like, 'OK! Here we go! We're going to do it again!' It is a choice to do this to our bodies. Neither of us are getting any younger! But it's a choice that we're putting ourselves through. I couldn't do this with anyone other than Andrew—if we didn't have each other, it wouldn't be happening.

Do you have a performance philosophy?
Andrew Champlin: I think that a performance contains within it a huge range of possibilities, the largest of which is to transcend the images that we know. This is what always brings me back to live performance, the proposal that you have the ability to change someone's ideas of beauty or reality and how people relate to one another.
Alexandra Albrecht: My philosophy as a performer is to find the artist who can place an equal trust in you to the one you place in them. I'm not working in the dance scene in a way where work is being put on top of you. We're building this work together. I also like generating work that you would want to see! I would only want to be in work I'd want to watch.

Do you have a preshow ritual?
Andrew Champlin: For this show, we always paint our nails. We tape our feet and we paint our nails. Also, before we start, we all stand in a circle and have a nice embrace, then Kyli goes under her table, and Jillian goes into the audience.
Alexandra Albrecht: I have to Nair! We wear these leotards! It's like I'm wearing a bikini. There are other little rituals: the braiding of the hair, the makeup. Kyli has been using my lipgloss for two years. The towels have to be just so at the watercooler. And you know, I've never done any piece for this long. In the rest of the dance world, everything's so quickly up and down, you don't have time to develop a ritual. 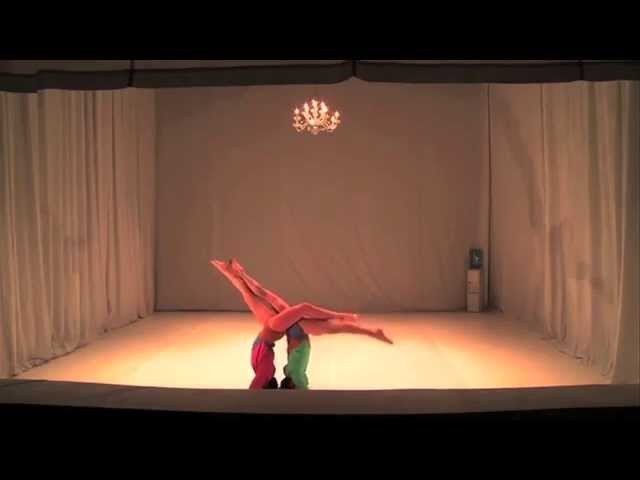