The Bessie committee couldn't pick just one of ex-Cunningham dancer Melissa Toogood's performances, so they nominated her for her entire body of work during the 2014−15 season, which included works by Kimberly Bartosik, Merce Cunningham, Rashaun Mitchell, Stephen Petronio, Sally Silvers and Pam Tanowitz. Somehow she has become indispensable across the dance spectrum—known for her authority onstage, the Australian Toogood has emerged from the dissolution of the Cunningham company as a source of radiant intensity that shines for any number of choreographers.

When did you get serious about dancing?
I was pretty young—certainly, in 8th grade I transferred to a wonderful performing arts high school. I have to say being in my 30s, I've been dancing better than I ever have!

So, describe this season.
I performed with Kimberly Bartosik in Ecsteriority4 (Part 2), Rashaun Mitchell's Light Years at New York Live Arts, Bill Young's A Trio of Early Cage; I danced for Sally Silvers at Roulette and the 92nd Street Y with Actual Size; there was Stephen Petronio's Bloodlines at the Joyce, Pam Tanowitz's Guggenheim show and a Platform at Danspace [as well as a piece at Bard], and touring with The Bang Group, and there was also the latest season of Dances for an iPhone (only on line) that I did with my sister.

How has it been to move among so many different choreographers?
I feel particularly at ease moving among styles; they are all very different, yet at the same time, I'm a dancer, and I approach it all the same way. I use the the same physical attention, doing one piece to the next, finding out what's different. I think it makes sense for me to be a freelancer because I do like doing very different things and not just doing one form of dance. Stephen [Petronio]'s work affected me the most, actually. On the outside, it looks like there would be an easy way in—but his movement in my body has changed me the most. It's been good physical information for me. Stephen would say, 'Allow the moment to go where it wants to go,' and I would think. 'But I tell my body what to do!' It's a different way to come to the movement.

Do you feel your time with Cunningham prepared you in a special way for this?
Definitely the rigor, the physical investigation even when doing minimalist work, really understanding and just making a choice about how to walk or stand still in a piece. Merce changed my awareness of all that. And what I so loved about Merce was that everything was possible source of inspiration; there was no movement that was not allowed. So many times you would do something silly onstage, and yet we would physically commit to it. I feel Pam [Tanowitz] has that same eye—nothing is discounted, all the possible movements, all the possible stories are there for her to mess with. That's something I still crave and look for, and you know, I still take Cunningham classes. I find it's so useful for any kind of work—it gives you a flexibility of body and mind.

What did you take from the productions this year?
Definitely all of them have their moments! I really do go into every show like its my last because I've dealt with injuries so much, and from such a young age. But I think that getting that opportunity to dance Merce's work again [in the reconstruction of RainForest with Stephen Petronio] was really special.

Do you have a performance philosophy?
I never figure out how I'm going to perform a piece until the complete work is finished; because if I don't understand the continuity of the piece, I can't have a picture of my role in it. My philosophy is that even if I'm not being worked with, I pay attention to what's being made on other people. That's something I learned at the Newtown High School of the Performing Arts—we were always in the room all the time. That informs me.

Do you have a preshow ritual?
It changes. I warm up everyday depending on how my body's feeling. I do take Cunningham classes so I can figure out really quickly what's going on with my body. I don't like to rush. I don't like to leave; I like to be there and be in my head. I don't like to be rushed onstage. I generally like to think through the whole piece; I learned that in high school, to use visualization before every show. 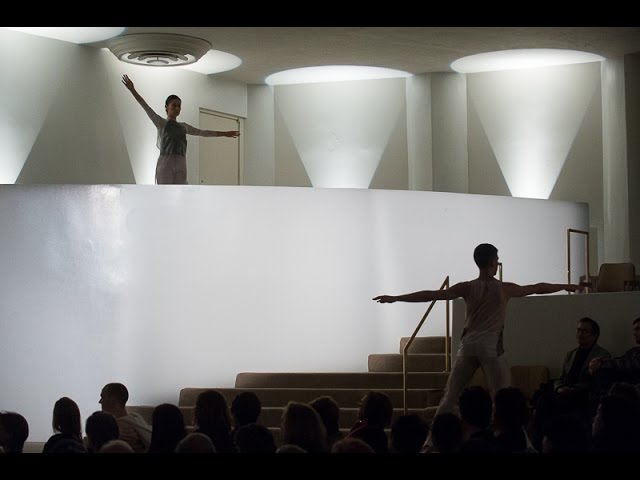