Everything we know about the proposed Brooklyn Queens Streetcar

Mayor de Blasio spoke at length yesterday about the proposed streetcar that his administration is backing that would potentially link Astoria in Queens with Sunset Park along the East River waterfront.

The $2.5 billion project would consist of 16 miles of track that would, at times, run parallel to traffic. About 60 passenger cars would make up the system with the streetcar traveling at about 12 miles per hour.

“The center of gravity is shifting more and more to the outer boroughs—and particularly to our two most populous boroughs,” Mr. de Blasio said yesterday at a press conference in Red Hook. “So we’ve got to answer that with a new kind of transportation and a new way to connect everyone.”

De Blasio went on to argue that the streetcar would cut travel times for 700,000 New Yorkers, 40,000 of which live in 13 public housing complexes along the route. The service is expected to connect to 10 ferry landings, 15 subway routes and 30 bus lines, with its exact route and the location of stops to be determined in future community engagement sessions. Construction isn’t expected to begin until 2019.

Even though a ride on the streetcar would cost the same as a MetroCard swipe, some were alarmed by the news earlier this week that there would possibly be no free transfers between the city-run streetcar and state-run MTA.

"Even if this were a thing unto itself, it would still be adding intensely to people's options and ability to get around," the Mayor responded on Tuesday. "A lot of people are just going to take this from one point to another without transferring. This is progress unto itself.”

In addition to controversy over the streetcar’s relationship with the MTA, an in-depth look at The Awl found some shadowy goings-on within the streetcar’s most vocal supporter, a non-profit called Friends of the Brooklyn Queens Connector. Not surprisingly, many of its members have strong real estate and business interests along the East River waterfront. 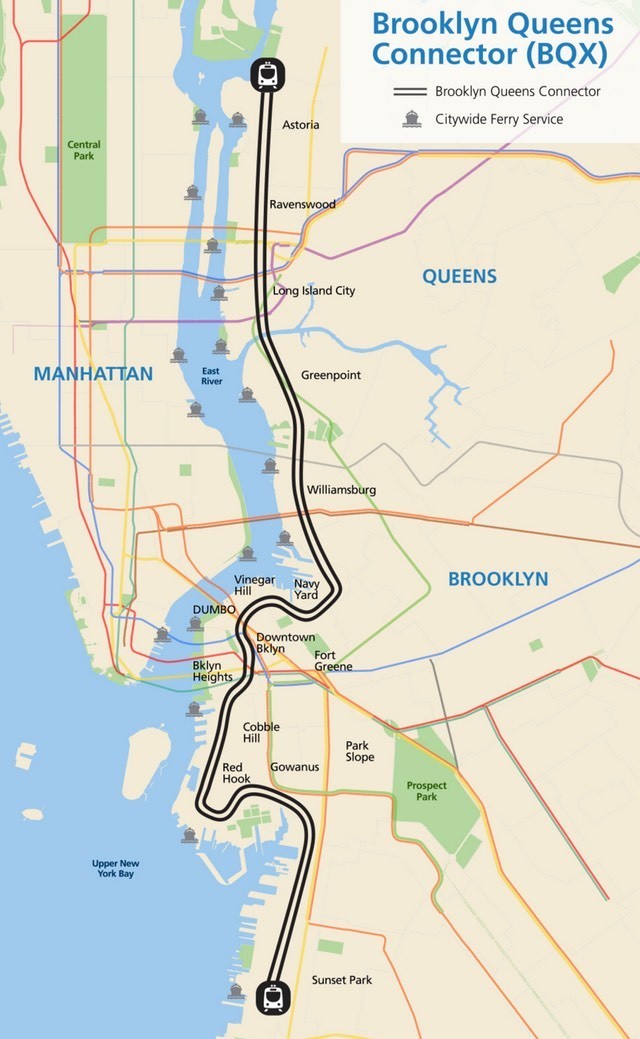