“What’s that? You’re breaking up,” sings vocalist/pianist Nicole Miglis halfway through “Particle,” the opening to Hundred Waters’ third full-length album, Communicating. Delivered in her intimate, enveloping whisper, it’s an apt entry to a record about the nuances of miscommunication, unbreakable habits, hiding and unhiding. Since forming in 2011, the Los Angeles via Florida trio, which also includes electronic producer/bassist Trayer Tryon and percussionist Zach Tetreault, has made enormous songs with seamless layers of acoustic and electronic instruments. Communicating— released in September by OWSLA, the label owned by longtime fan Skrillex—sees the band pushing itself in new directions, with the occasional sparse, art-pop piano ballad and its most thoughtful songcraft to date. 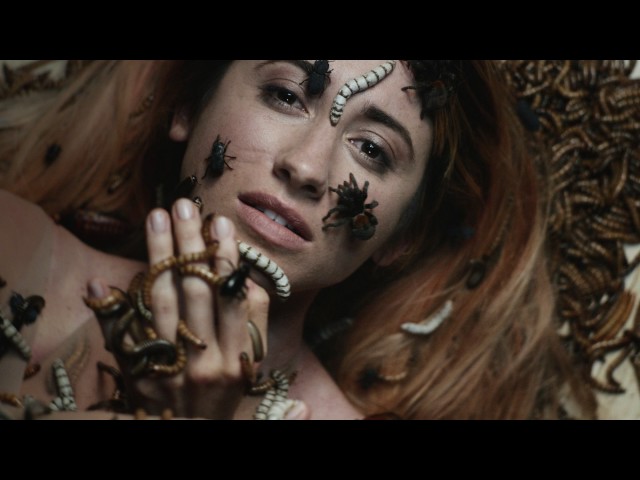 It’s been three years since your last record. Is this the longest time you’ve spent on an album?
Miglis: Yeah. It was a lot more filtering. We were a lot more critical of what we were doing. We wrote a lot more and we put more expectations on ourselves than last time.
Tryon: We do everything for the most part ourselves. We’re doing music as a group. We record drums and piano. Everything we do has to satisfy all of our needs.

How do the three of you write songs together?
Miglis: Tray is the believer. I’ll write songs every day and constantly make stuff. But I don’t have the drive to share it as much. I kind of do it for therapy. And Tray will recognize, “Oh that’s really good, we should keep that."
Tryon: Most of the songs start off with Nicole.

Even in the band’s early stages, playing DIY shows, Hundred Waters always felt like a very ambitious project.
Miglis: I think we’re ambitious in that we want to make really great songs and records that last. But so much of that isn’t really up to you. As an artist, you want to feel like you’re doing something that people need, and that you’re giving something back. But it’s so mysterious and you can’t really plan for that stuff. People are just like roller-coasters. When they need that album, they’ll find it. And that’s beautiful.
Tryon: Playing in Gainesville, we didn’t know about anything other than the music we were making, the music we liked and the immediate world around us. We didn’t know what a manager was. We didn’t know about touring and venues. When you start out making music in L.A., when you release your first single you have a “team.” We were completely oblivious to that. We didn’t think about the fact that we could be doing this years later. Or what that might look like. We weren’t sitting on Twitter wondering what all of these big music publications thought.
Miglis: Nobody came to Florida. There was a little, isolated community, for sure. You’re just kind of listening to each other.
Tryon: But with the smallness of it, if something was cool, it was the whole world.

You’re part of a very specific fast-moving corner of the electronic music world. How do you balance that while also trying to write songs that will outlast trends?
Miglis: I love reading words alone, and poetry and literature. And the music is a way to color it and accentuate it and build this world around it. Electronic music has a lot of possibilities that we’ve never had before. Our goal with this music has always been to stay true to classic, pure, honest songwriting, and then to use electronics to paint it, in a way. I think just making sure that the structure, the root, the building of the song is something I’m happy with, reading it on a page alone.

We are on an electronic label that puts a lot of emphasis on beats and dancing. Having fun is the main goal of a lot of that music. It’s weird being the bummers at the parties [Laughs]. It’s not always about having fun. Music means different things to different people. It’s much more like therapy for me. I need it. [Our music] just comes from a different place than trying to make people dance and have a good time.

You just released a video for “Fingers” where your whole body is completely covered in bugs. It’s pretty horrifying.
Miglis: That was just my way of trying to illustrate anxiety. I’m really fascinated with insects and I think it’s interesting how we’re so terrified of them. For a lot of good reasons and also a lot of reasons that don’t make sense. Originally the idea was supposed to be ants, which is no less horrifying. The visual came into my head randomly when I was in my kitchen and there were ants everywhere. Ants are the smallest insect and also the most understudied. There’s so much we don’t know, and we don’t study because we don’t see them.