Meet the Undateables: Christina and Michael

Written by
Will Gleason
Wednesday May 18 2016
FacebookTwitterPinterestEmailWhatsApp
Advertising 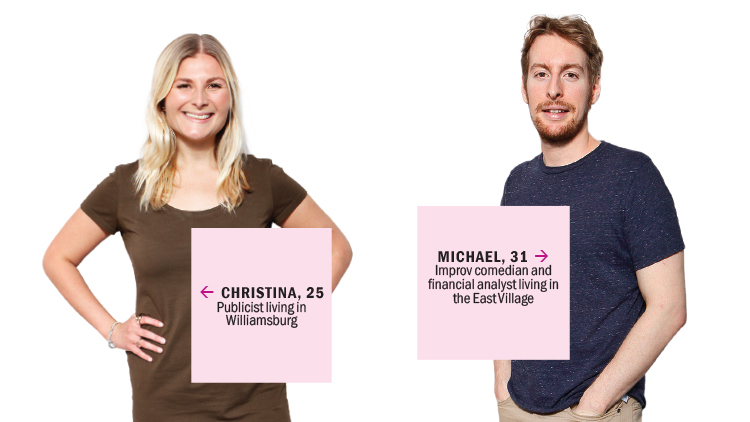 Why they're single:
Christina: Travels a lot, so can be difficult to catch
Michael: Loves performing more than the idea of being in a relationship

Ideal date:
Christina: Something outdoorsy followed by some red wine and pizza—but Paulie Gee’s-style, not, like, a slice
Michael: Grabbing a couple margaritas, going on a stroll through a park and then maybe some ice cream

First impression
Christina: “We arrived at the same time. He was really nice and seemed super outgoing, so that kind of put us both at ease. I don’t really have a type and didn’t know what to expect.”
Michael: “While I don’t typically go for the classic tall, blond, blue-eyed type, I thought she was attractive. I’m not sure if you should write this, but she had great legs.”

Chemistry
Christina: “There was definitely friendly chemistry. I could see us hanging out on the weekend or going to a comedy show or something like that but not necessarily romantically.”
Michael: “From what I could tell, she was a little more aggressive, Type A. That doesn’t necessarily vibe as well with my silly, laid-back vibe, but it wasn’t like we didn’t have chemistry.”

Awkward Moment
Christina: “We’re both very outgoing and a bit loud already, and we had these drink coupons. There was a couple sitting across from us that was like, ‘What are these kids up to?’”
Michael: “There was a moment when she took the menu and started reading it in a British accent, but I found it kind of funny and adorable.”

Afterward
Christina: “He walked me to the subway, which I thought was really nice. We hugged goodbye and exchanged numbers. We’ve actually already messaged about comedy.”
Michael: “If I’m being completely honest, I would have gone in for a kiss, but I sensed from her hug and a quick goodbye that she probably wasn’t feeling it romantically.”

Verdict
Christina: ♥♥♥♥ “I think it would definitely be a friendship, but I’d see him again for sure. There were really no lulls in our conversation. He was very easy to talk to.”
Michael: ♥♥♥ “I thought she was cute and cool to talk with, but ultimately, I didn’t think our personalities were super compatible. That said, I’d be open to a second date.”