Meet the Undateables: Coulby and Joe 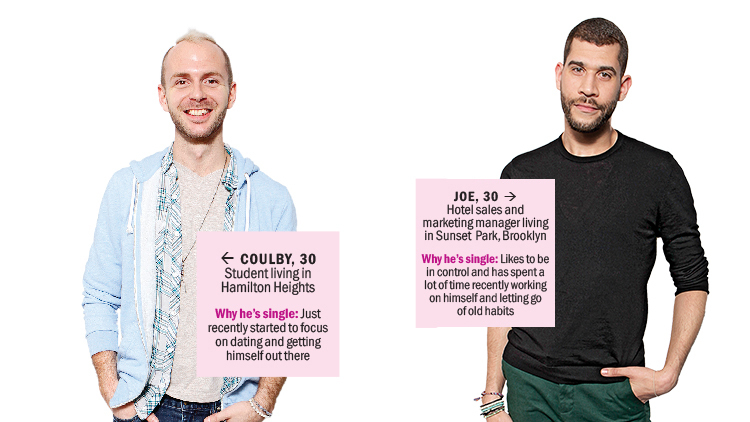 Why they're single:
Coulby: Just recently started to focus on dating and getting himself out there
Joe: Likes to be in control and has spent a lot of time working on himself and letting go of old habits

Ideal date:
Coulby: Dinner then something fun and interactive like bowling or minigolf
Joe: Grabbing beers or cocktails at a low-key dive bar


First impression
Coulby: “My initial feelings were, Oh, phew, he doesn’t look crazy. He went in for a handshake, but I was like, ‘No, its okay, we can hug.’ It was really chill from that point forward.”
Joe: “He’s not the type I usually go for—I like boys with beer bellies and beards. He’s a little smaller and thinner. I think I just automatically friend-zoned him.”

Chemistry
Coulby: “We laughed a lot—the conversation never felt flat. I was trying to really stay in the moment and not overthink anything, but it wasn’t romantic for me.”
Joe: “We just had surface conversation that you’d have with anyone you meet at a bar. After the first 10 minutes, I was thinking, Mmm, no. I didn’t feel romantically connected.”

Awkward Moment
Coulby: “He hadn’t bowled since he was 14, but he was fantastic. I kept trying different techniques and not nailing it. He took pictures of his great score next to my terrible one.”
Joe: “As I was walking in, a guy waved. I was like, This must be him! I said, ‘Hey!’ Then someone walked up behind me, and I realized he was just some guy waiting for his friend.”

Afterward
Coulby: “He said, ‘Text me to let me know you made it home safe,’ but when I got home, he’d already texted, saying, ‘I had a great time.’ I said I had a nice time too, and that was that.”
Joe: “We were taking the same train, so I led us to the station because he’d never really been to Brooklyn. He was like, ‘Oh, we’re in Williamsburg?’ That was shocking to me."


Verdict
Coulby: ♥♥♥♥ “It was a great time. There was no major turnoff. Then the ‘but’ comes in—and I feel bad—but I don’t want to go on another date with this guy. It’s just my instinct.”
Joe: ♥♥♥ “He was a really cool guy. I’m not into him like that, but if he wanted to grab a drink or see a show, I might do that. But I probably wouldn’t be the first to reach out.”