Meet The Undateables: Jason and Vanessa 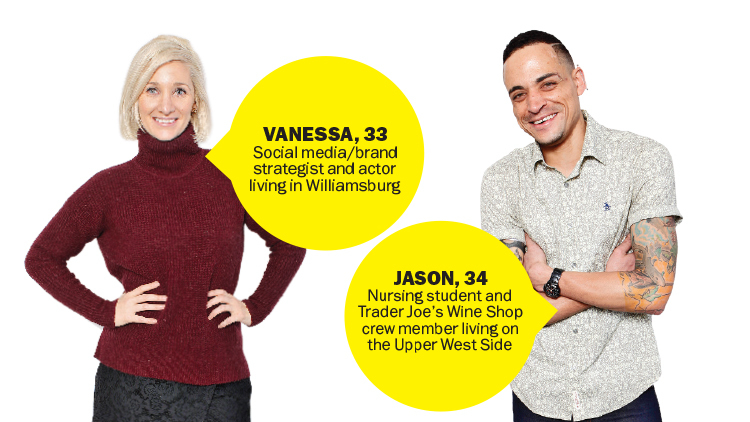 Why they're single:
Jason: Hasn’t found a woman who’ll buy him a drink yet
Vanessa: Has a low tolerance for awkward drinks and conversation

Ideal date:
Jason: Making no plans, walking around and acting like tourists
Vanessa: Skipping the get-to-know-you stuff and taking a weekend or day trip

First impression
Jason: “I was pleasantly surprised. She’s really cute. She has nice blue eyes. I don’t have a type—to have one is kind of closed-minded—but she was definitely attractive.”
Vanessa: “He was at the first table when I walked in. He was nice, friendly and approachable. He had an earring that I wasn’t into—it was a little Hot Topic–y for me.”

Chemistry
Jason: “In the beginning, I was like, ‘Yo, you’re pretty good-looking, why are you undateable?’ That put us at ease. We had that vibe where we could chill and talk.”
Vanessa: “Overall I think the conversation went well. We talked a lot about work, but that’s not as boring as it sounds. He’s a very genuine person. It wasn’t forced or phony.”

Awkward Moment
Jason: “In the middle of our conversation, sometimes she would spin her straw in her drink. It made me want to ask, ‘Am I boring you?’ But I didn’t want to be rude.”
Vanessa: “I gave him my business card, and he made a comment because my cards say HELLO on them. I got them before the Adele song, but now they’re kind of loaded.”

Afterward
Jason: “I asked, ‘Hey would you want to hang out again?’ That seemed awkward. She gave me her card and went downstairs. No hug, unfortunately, but I wasn’t stressing it.”
Vanessa: “We were there for two hours talking. I had to be up early the next morning, so I said, ‘Okay, let’s get out of here.’ We rolled out, walked to the subway, and that was it.”

Verdict
Jason: ♥♥♥ “I’ve had dates where it’s like, ‘I fucking like you,’ and this wasn’t one of them. But I’d definitely be willing to hang out and get to know her more.”
Vanessa: ♥♥♥ “He’s easy to talk to, but I didn’t see us dating. He’s in school, and I totally respect that hustle, but I need someone who’s not in a transition phase.”