Meet The Undateables: Justin and Matt 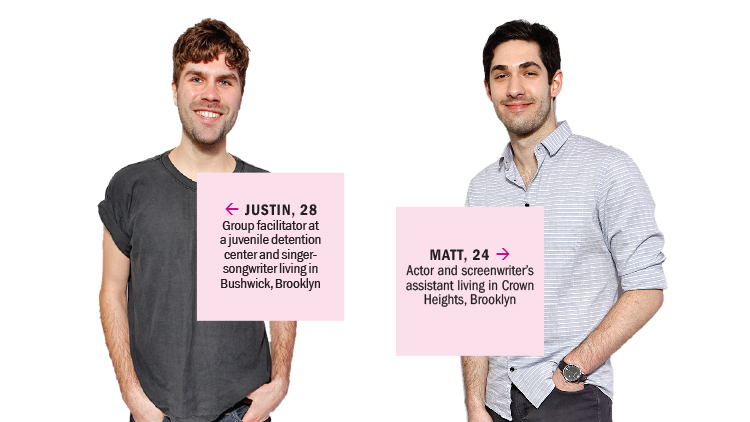 Why they're single:
Justin: Is an all-or-nothing person, so has to get a strong feeling to go for it.
Matt: Is selective and hasn’t met the right person.

Ideal date:
Justin: Going to a concert or biking to the beach
Matt: Drinks and a meal somewhere outside, with lights strung above, followed by a walk through the park.

First impression
Justin: “I thought he was really cute. I was happy to see that he smiled instantly—he had a great smile. We immediately started talking. It never felt awkward at all.”
Matt: “Within the first two minutes, I realized we weren’t going to have a bad time. He was handsome and very open but not my type. I tend to go for older, bigger guys.”

Chemistry
Justin: “The conversation kept rolling. We’re both pretty witchy and don’t enjoy light-hearted things—I liked that. I don’t know if there was flirtation, but it was an easy connection.”
Matt: “We never stopped talking. We talked about what turns us on artistically and about ghosts and haunted stuff, and we shat on Sam Smith a little. There was good energy.”

Awkward Moment
Justin: “We exchanged numbers, but later I thought I’d lost his. I was like, ‘Shit, he’s going to think I’m never going to text!’ Luckily I’d saved him in my contacts and forgot somehow.”
Matt: “He did a Renée Zellweger impression, and I responded with my Drew Barrymore impression. I never expect to do that on a first date. I was hesitant, but he made me do it.”

Afterward
Justin: “We were there a solid two hours and were still in the middle of our conversation after dessert, so I was like, ‘Want a nightcap?’ We grabbed a drink at Nowhere Bar.”
Matt: “When I got home, I texted him saying I wanted to be transparent and was interested in hanging out again—but as friends. He responded with, ‘Totally, I got that vibe too.’”

Verdict
Justin: ♥♥♥♥ “I was shocked at how cool he was. But I didn’t feel a romantic vibe. I don’t think we’re meant to be. We’re already talking about meeting up again though.”
Matt: ♥♥♥♥ “It was really fun. I put it in the friend zone, but I’m interested to know more of him in the future. We’re probably going to do something next weekend.”