The hottest Broadway musical right now is the multi-Award winning Hamilton, all about the life of Founding Father and Secretary of the Treasury Alexander Hamilton, who actually used to live right here in NYC. Unless you've seen the musical, or are just a regular history buff, you might not know that Hamilton's life had an untimely, tragic end.

Pretty much no political figure, even today, is without enemies. Hamilton had a long time rivalry with Vice President Aaron Burr that reflected the tensions in the nation at the time. The feud began when Burr took a Senate seat over Hamilton's father-in-law in 1804. The final straw between them was when Hamilton publicly defamed Burr, so Burr proposed a duel.

At dawn on July 11, 1804, both men rowed across the Hudson River over to a popular dueling ground in Weehawken, where laws weren't as enforced. By the cliffs of the Palisades Burr and Hamilton dueled. There are numerous accounts on what actually happened that day, some say that Hamilton intentionally missed Burr, which was a common practice at the time, duels were more about bravado than actually killing someone. It was then that Burr made a fatal whoopsies and mortally wounded Hamilton. Hamilton later passed away later that day from his wound and was buried at Trinity Cemetery. Burr was charged with murder in New York and New Jersey but neither charge made it to trial.

The dueling pistols are currently housed at the JP Morgan Chase headquarters, but are unfortunately not open to the public to view. Seem like a random spot to house these artifacts? Not really. JP Morgan Chase (formerly The Manhattan Company) was founded by Aaron Burr in 1799. 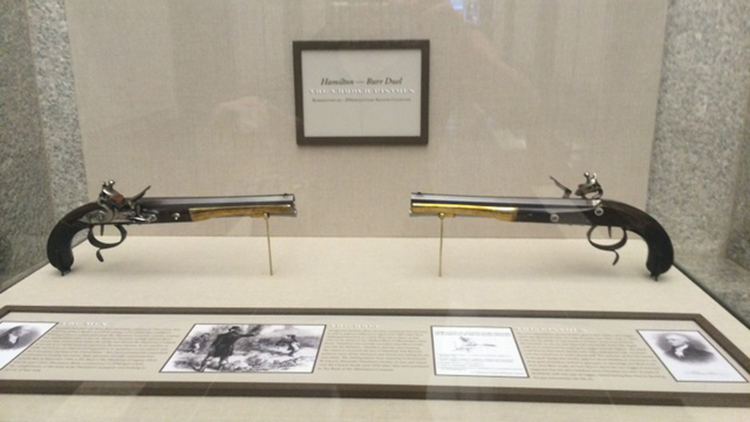 The dueling pistols used by Alexander Hamilton and Aaron Burr