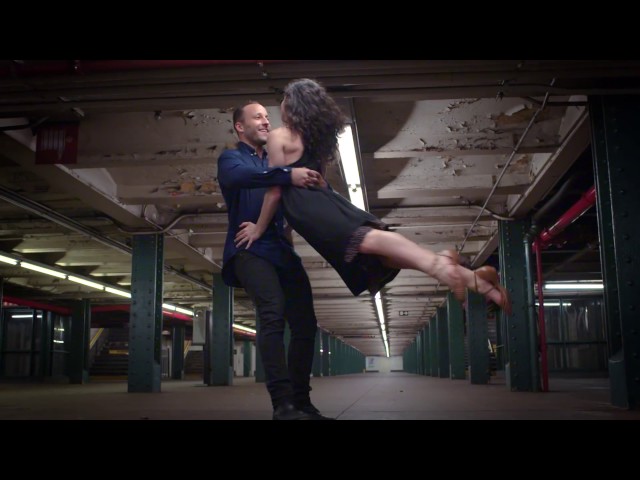 When we embark on our daily commute, we usually go straight to autopilot, following the same route we know by heart, headphones firmly planted over our ears, ignoring everyone and everything. We just focus on that train and when the hell it will finally get here.

But poet Max Stossel wants you to open up your eyes and live in the moment, even if it it is on the crowded subway platform. His lyrical video features a pair of subway lovers who meet on the tracks and end up twirling along subway cars and platforms. Stossels' lyrics beg of you:

“What we don’t see is the tragedy at play,
As the love of each of our lives is standing just an arm’s length away.
We won’t notice today.
We see our soulmate as in the way
Of the beam of light we hope will display,
Indicating that our train is not 6 but 5 seconds away."

We asked Stossel over email about the inspirations behind the video.

Max Stossel: There was a specific woman on my mind, but the inspiration really happened as I was waiting for the F train at West 4th street, and it just wasn't coming. It was one of those really abnormally long wait times, where the station gets more and more crowded and people start making funny noises to express their frustration. I was annoyed as well, but gave up and started laughing, and as soon as I did others around me started laughing too.

Time Out New York: It's easy to zone out the entire experience of the subway, rather than be present in it and try to enjoy it, as you address here. Do you think all New Yorkers are rushing through our lives?

MS: When we rush through our lives, as so many New Yorkers do, it's easy to see these situations as deeply and personally unfair, but when we shift our perspective it becomes clear that we're all in it together. We're surrounded by some of the most awesome people on earth yet we just stand in stressed-silence. I hope this poem can change that.

TONY: Have you fallen in love on the subway?

MS: I haven't found love on the subway, but have had some wonderfully meaningful experiences. They range from getting an entire train car to sing an a cappella arrangement of "Stand by Me" on the L train to eating an entire bag of Ghirardelli chocolates at 3am with a beautiful stranger named Rosetta. Some of my favorite "New York moments." Sean Ferry, one of the producers (along with Matthew Freidell, and myself), of this video got involved because met his wife on a public bus! They actually just had their first child a few weeks ago.

TONY: Tell me about your website, Words That Move.

MS: Words That Move is the homepage for the art in me. "Subway Love" is the first piece I've shared digitally, and it was turned into video because it's the best medium for the message, but different messages need to take different forms to be well-received.