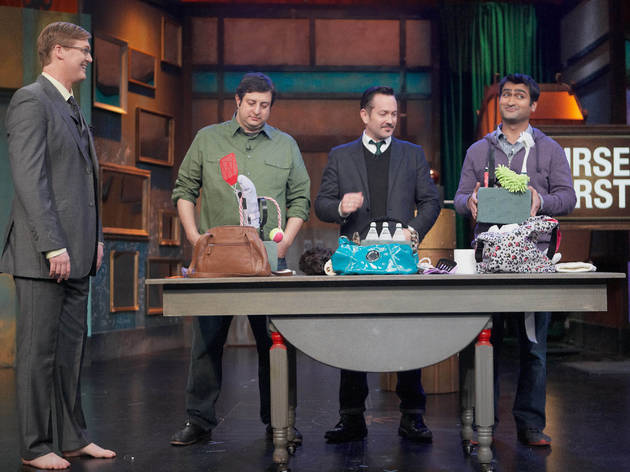 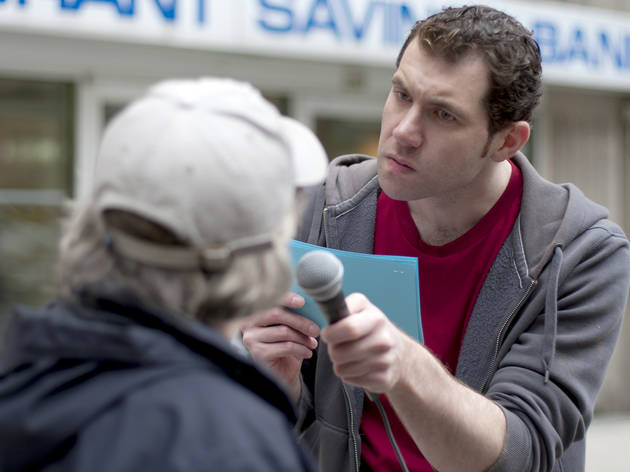 2/3
Photograph: Courtesy Fuse/John DBilly Eichner in Billy on the Street 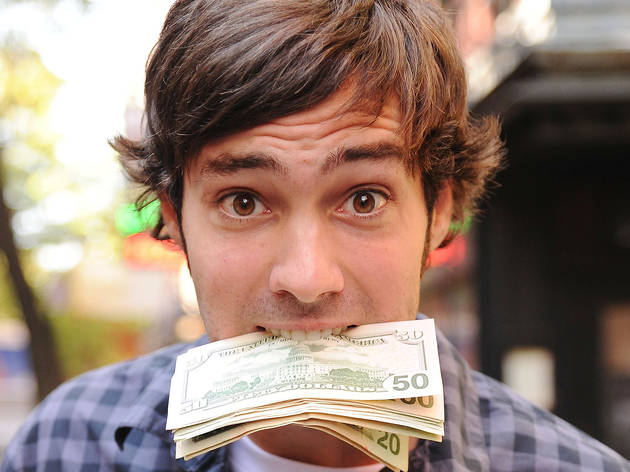 Native New Yorker Billy Eichner has been doing man-on-the-street interviews for years. Frantic and frazzled, Eichner rushes civilians and shoves the microphone in their faces, blurting out music and pop culture questions such as, “Is Rihanna overrated?” Usually people run away in horror.

When Funny or Die contacted him looking for pitches in late 2010, Eichner discovered a way to transform his propensity for guerrilla interviewing into a  marketable, lasting skill: by turning it into a game show. “We said ‘It’s Cash Cab on cocaine,’ ” he recalls. Now, correct answers to Eichner’s impromptu queries can net contestants money, even if the definition of correct is totally subject to his whims.

Billy on the Street, whose second season is in production for the Fuse network, may have been something of a bellwether. Recently, it has been joined by many more convention-skewing comedic game shows on both TV and radio. Bunk, hosted by Kurt Braunohler, features comedian competitors doing insane things for  meaningless prizes (sample challenge: “Shame That Puppy”). MTV’s Money from Strangers, which launched in April, hides comics in a van and asks a contestant wearing an earpiece to torment unsuspecting members of the public. NPR’s Ask Me Another started in early May; it’s a quiz show in the vein of the radio network’s ongoing Wait Wait…Don’t Tell Me!, only Mensa-ier and hosted flawlessly by storytelling staple Ophira Eisenberg.

In addition to podcasts and Web series, game shows have become yet another avenue for comedians to distinguish themselves and establish a niche. Just ask Jeff Dye, who hosts Money from Strangers. “My favorite kind of comedy is messing with people—but I’m not a solid actor, so I smile a lot,” he says. “With this show, I’m hidden in a van, so I can laugh, but nobody thinks I’ve blown it.”

The show manages to highlight Dye’s impishness on a large scale, and he hopes it’ll help relative unknowns get exposure, too. Those who grasp the improvisational play of Money from Strangers have a unique opportunity to shine: In one episode, Noah Garfinkel gets a competitor to enter a deli and shove a cannoli down his pants; Garfinkel’s friend and comedy partner Joe Mande heightens the prank by convincing the guy to juggle oranges—in front of both employees and customers.

Eric Bryant and Ethan T. Berlin, creators of Bunk, also hope to provide the  participating comics with a singular chance to stand out; they pick those who fit the format rather than looking for names to sell the show. “We had a tiny budget for flying in people, so getting the most famous people wasn’t an option,” says Berlin, who also wrote for Billy on the Street’s first season. “It was about maximizing the funniest people.”

Bunk is as much a game show as professional wrestling is an athletic contest: It’s more of a sketch program retrofitted into something resembling Jeopardy!, with the contestants driving the comedy as much as the format itself. Because it’s not a real game show, the point value of challenges and the final score don’t mean anything. Bryant and Berlin chose the format because it provided them with something of a blank slate. “Game shows have an inherent improvisational aspect,” says Bryant. “[Our contestants] are answering questions on the fly, but the point is to be funny.” After Kumail Nanjiani shames his puppy with the barb “You will never know how delicious chocolate is,” the pup starts nibbling on his finger. Nanjiani quips, “Aw, he thinks it’s chocolate—he’s so racist.”

The large casts and collective DIY ethos behind these programs mean an increase in the number of comics on TV. Plus, networks seem to be chomping at the bit; when Billy on the Street was pitched, Funny or Die’s Mike Farah says seven or eight networks immediately made offers—and Fuse wanted to skip the pilot and go straight into a series.

But why is this particular resurgence coming now? “It’s TV. Everything’s a cycle,” Eichner says. “What happens is we don’t see a lot of game shows for a while and they’re considered uncool. And then all of a sudden what everyone wants to do is come up with a cool version of them. It’s the same reason they’re making movies out of board games now.”