What do you like about playing in New York?
I live in L.A., so you drive everywhere and there’s not people on top of you all of the time. New York is great because it’s such a cross-section of the world; and when you’re used to people being shoulder-to-shoulder all the time, in the street, on the train, you become a people person. People are very open to hearing a lot of different perspectives, and they aren’t as sensitive.

What do you spend your time doing when you’re not onstage?
I’m a big, dumb tourist. I have family that lives on Staten Island, so when I’m here, I’m visiting family, too. So I don’t get to be like, “Let’s go to the Statue of Liberty.” I’ll see it from the Staten Island Ferry. But I’ll be at 42nd street most of the time, standing there, thinking, this is from that scene in Spider-Man! Any type of food you want, you can get it in that area. I always tweet, Hey, where should I go? People will tweet back, Oh, if you want the best pastrami sandwich, you’ve got to go to this place. Best pizza, this place. I’m rarely disappointed. I don’t remember the names of the places, but I like going to places native to a town.

You did open mics in your early twenties and started up again after an eight-year break. How hard was it to really get going after the age most people are on their feet?
It wasn’t hard at all because I was more mature. I was more able to understand that [comedy] was about cultivating relationships, about persistence and consistency. And you just don’t know that when you’re young and your insecurity is kicking. You have all this doubt and fear. When you’re older, you’re able to let that stuff go.

How do you think you handled success differently than you might have if you had blown up at, say, 22?
Simple appreciation. I had a real job! I know what it is like to be out here in these streets, trying to make ends meet. I also understand how hard it is to make it in this business. There’s a little bit of luck involved—being in the right place at the right time, getting the right audition and impressing people a certain way. I just appreciate what it is.

When did you realize the mustache was going to be a trademark?
It’s something I don’t think about because I’ve had this my entire life. The way this thing grows, I think I was eight months old with a mustache. Strangely, for me, its: Why doesn’t everybody have a mustache? Am I weird? I look stupid without a mustache. I don’t grow a beard because it’s so choppy, and now the gray hair is kicking in. It’s not a good look for me. You just got to know when to hold ‘em, like Kenny Rogers said.

What’s your relationship with the road? How much of touring clubs and colleges do you enjoy, and how much of it is grueling?
I take the good with the bad. I always wanted to be a comic, and part of that, for me, was that I wanted to be on the road. It’s a lonely existence, but it is what it is. More people out there feel like Allen Iverson, like, “Practice?!” They have a love affair with the end result, not the journey. That’s what all this stuff is. All the open mics and horrible gigs you have to do to get yourself to a good place. And it never ends because you’re always looking for more. You have to be okay with that long journey. It’s not always fun.

How’d you achieve that level of serenity?
You know what it was? I was in El Paso doing a gig, and it was horrible. I was staying at this horrible hotel and across the highway was a Walmart and nothing else. I was in my dark hotel room under the covers watching CNN, and this story came on. It was called “The Dark Side of Comedy.” And it was talking about depression and comics like, and I was like, Oh my God, they’re talking about me! After that, I was like, I have to start renting cars and exploring the city I’m in or bring a friend with me. Make the best of the situation. I’ll go check that stuff out. I enjoy the small moments. I try to find the mom and pop place that’s in the area.

Are you someone who’s romantic about the vibe of comedy clubs or are you hoping to play theaters?
You play theaters because you have so many fans willing to pay X amount of dollars and you don’t want to deal with the grind of a comedy club. It’s a money grab. You only get one chance to do a show at a theater; if it’s not good, what do you do? That’s it! At comedy clubs, you get to see a lot of different people every night and you get a bunch of chances to do shows. You get seven chances sometimes. I think people always end up back in clubs, unless you’re one of those people in the top 5 percent of all comics who are going to sell out a big theater.

What does a stand-up has to do well that an audience would never notice?
People don’t realize it’s not just about being funny, and they don’t know how perceptive a comedian needs to be about human nature. You have to really be able to read a situation and peoples’ emotions. I see a couple’s body language and say, “It looks like you were married but you’re not anymore.” A lot of times, I’m right. I don’t know anything about them, I can tell just by looking. Even if I get it wrong, it can still be funny if I’m quick on my feet.

How much did your stand-up inform how you created Montez?
They’re not the same at all. That’s just this crazy character. If you’re coming to the show because you like Montez, I’m just not like that. I have my own perspectives. That’s what I want people to know: I’m a stand-up, that was my first love, come check me out and you might enjoy me more than you enjoy Montez.

How do you talk to people who have never seen your act about your stage persona?
It’s me, unfiltered. It’s about not being afraid to talk about whatever subjects there are to be talked about, the taboo subjects. I’m a champion against political correctness.

Do you agree with Jerry Seinfeld and Chris Rock that college campuses have become prudish?
Colleges are the worst. You would think places of higher education would be open-minded. I find college students to be closed-minded, overly sensitive, with no point of view and no ideas of their own. It’s so weird. I do have it a little easier than most comics. I’m on a college show, so they think they know me: “Oh, it’s Montez!” I like to start my shows by saying, “If you’re sensitive, get the eff out of here.” I try to defuse the situation. Why are you at a comedy club if you’re so freaking sensitive? You don’t go to a strip club and say, I don’t do nudity.

After five seasons, what’s your favorite part about going to the Workaholics set?
[Anders Holm, Adam DeVine and Blake Anderson] are great, but they work so hard during every single scene. They don’t have time to just goof off. I come in, I say a couple of dumb lines and I’m done for the day, so I get to really pal around with the crew. And the girls, Maribeth Monroe and Jillian Bell, are my favorites. We’re on-set buddies, like a little family, and we hang out even off-set.

What’s the most ridiculous thing that’s happened on-set but off-camera?
It’s Tuesday to Friday, very fast and very compact, so there’s a lot of work going on. But so many silly things even happen just on camera. Adam makes me laugh so much. I remember this episode where they’re doing a séance and during the scene, Adam was chanting Nate Dogg songs. I couldn’t stop laughing and I didn’t know that we were filming. I didn’t hear anybody say, “Action,” so at the end, Adam says, “Well, that was a interesting choice Erik, that you decided to laugh the whole scene.” It’s always stuff like that.

In your act, you call yourself “pre-old.” What are your current symptoms?
I sprained both ankles recently and I was like, How the hell did that happen? Gray hairs. If I stop being active, the weight comes on like pudding. The people that like Workaholics are a very young crowd and I don’t have a lot in common with them. Some 23-year-old girl will come up to me and be like, “Oh my God, Montez!” And what do you do? Well, you know what to do, but after that. There’s nothing to talk about.

You’re still a single man. What’s your take on online dating?
That stuff’s great. Every town I go to, I turn on Tinder. I’m not shy; I meet strangers every night. I don’t mind not knowing anything about a person and trying to spark up whatever with them. But you need to use it as a tool and then get off of it as soon as you can. And you need to remember to be polite. I can’t stand people who don’t have good texting etiquette. I grew up at a time when we had to pick up the phone and talk to people, but these young people just don’t understand. They don’t even want to understand. Sometimes I feel like women will ask you an important question by text and then throw their phone across the room.

What’s your grand vision for balancing on-camera work and stand-up?
My dream job is to be a lab tech on CSI. The main guy comes into the lab and I’m listening to music like, “Oh, okay!” And say some techie stuff. That, or be the fat cop on Law & Order. The rest of the time, I’m on the road as a comic. 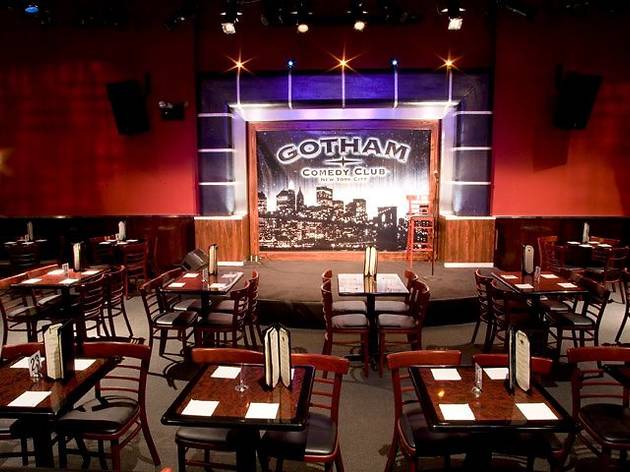 This affable comic, a regular on Comedy Central's Workaholics, talks dating, relationships and pop culture with a conversational tone and some sprightly physical bits.