The Key & Peele stars talk Game of Thrones, Dave Chappelle and the POTUS ahead of a free New York Comedy Festival show.

After finding one another—and the exuberant, physical dynamic they share—while performing on MADtv, sketch players Keegan-Michael Key and Jordan Peele haven’t looked back. After leaving that show, the duo created Key & Peele, a silly sketch program with a light touch that nonetheless spends most of its time probing issues of race. Now entering its second season on Comedy Central, Key & Peele’s most recognizable sketch—involving Barack Obama and his “anger translator,” Luther—was given a seal of approval by the POTUS himself.

Can there ever be any better validation than that of the President?
Keegan-Michael Key: No. That was surreal. And he made a point to tell us that he likes the show, the program Key & Peele. He’s not a megalomaniac who just watches the sketches he’s in.
Jordan Peele: [Affecting Obama’s tone] “Michelle likes it.” That’s the only thing that might have topped it.
Key: [Obama] said that.
Peele: “She likes it, and, you know, that’s the bottom line.”

When you are developing sketches, do you find you’re more drawn to portraying characters or playing with stereotypes?
Peele: Whatever scene you put in front of us, we can enhance with a strong character choice and make it funny. So in our writing process, that leaves us looking for what we call these special nuggets of scenes—an idea that we’ve never seen before, something that’s a universal laugh or the game of a scene.
Key: We don’t spend any time saying, “Here’s a stereotype I think we can manipulate.” Human behavior titillates us. Characters titillate us. The viewer consumes it that way, but we never mean to flip the stereotype on its head. The bitch sketch [in which two whipped guys prove their autonomy by quietly calling their wives bitches] is always a lovely example, because [we play] a couple of emasculated cowards, and there’s a number of ways to play that, but only emasculated cowards can make that game work.

Have you found the legacy of Dave Chappelle and Chappelle’s Show to be helpful or hard to overcome?
Key: Helpful, and I’ll tell you why. The thing I liked most about Dave’s show: The writing was thoughtful. For us, the primary thing is to surprise an audience with something they’ve never seen before. The secondary thing would be: Let’s be sure we’re thoughtful in the execution of it. And then the third thing would be to make some sort of social commentary. I don’t know how Dave and [Chappelle’s Show cocreator] Neal [Brennan] wrote—maybe they wrote the social comment first and then found the premise—but there’s always just a little intellectual rigor.
Peele: We don’t mind the comparison, because we like to be spoken of in the same breath as the guy. And we think that history will show that if you’re a fan of one show, you’re probably a fan of the other.

Key & Peele meticulously parodies genre movies and TV shows. Are there some you still need to do?
Peele: Fantasy. [We wrote] a Game of Thrones scene this year, essentially about the idea that you don’t see a lot of black guys in fantasy. Guys from two different Game of Thrones–y clans bonded: “I’ve seen trolls, dwarfs, unicorns—but I’ve never seen another one of you…whatever it is that we’re called.” And then, two weeks in a row, Game of Thrones had one black character and then another. [Laughs] This was enough to make us not produce it—it was the most expensive sketch we had on the table. 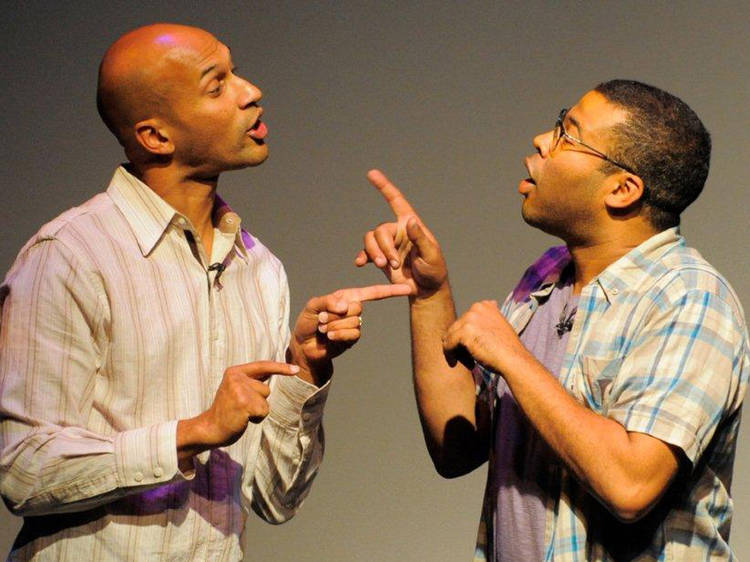 Enter for a free ticket to see Key & Peele live, as part of Comedy Week, at nycgo.com/comedy.