Michael Che interview: ‘Defending a joke is a position you never want to be in’

The year 2014 was a whirlwind for Michael Che, who joined The Daily Show as a correspondent before leaving to take his place alongside Colin Jost at the “Weekend Update” desk on Saturday Night Live (where he was already a writer), all in the space of four months. This week, he’s reminding us of his stand-up skills with five shows at Carolines.

Comics spend years developing their voice, so how hard is it to suddenly deliver jokes in the traditional news-anchor style of “Weekend Update”?
That’s the trickiest part of it, doing a joke that’s still in your voice. We’ve seen it done a certain way so many times that we feel like that’s the way to do it, but it should really be a blank slate where you take ownership of it.

Your September interview with the anti-immigration activist on The Daily Show was a classic. What’s going through your head when you’re waiting to drop a killer line on an interview subject?
You’re just trying to deliver it cleanly and make sure you don’t laugh! To deliver something deadpan is very difficult; I don’t think people know how hard those jokes are.

You caught some flak recently for your joke about the infamous catcalling video, where you compared the video to the experience of being hassled by fans. How do you feel about it now?
I felt like I was in the worst game of Telephone of all time! It went from quoting what I said to paraphrasing what I said to paraphrasing  what the paraphrase was, to the point where it was just: “Michael Che is okay with harassment.” I was like, Wait a minute! It was insane when I saw it happen, going from a statement to a headline to me being the worst person in the world.

Was that your first experience of fame coming back to bite you?
I wouldn’t say that it came back to bite me, it just felt like I grabbed a hot pot without a cover. But it taught me that people hold the job I have in very high regard. I’m not used to people caring about what I say, it’s just a joke that people will either like or not like, and then you move on to the next joke. So it was a lesson in responsibility.

Do you think there’s too much of a knee-jerk reaction to jokes on social media now? Or should comics be ready to back up what they’re saying?
Your number one job as a comedian is to be aware. You’re supposed to understand the temperature in the room more than anyone on the planet—that’s the whole craft of comedy. So in that instance, I was very irresponsible, Tweeting something that created a backlash and feeding the fire by responding to it. I’m lucky enough to have two different platforms to perform on—I do stand-up comedy and I have SNL. That’s where I make my most controversial statements because I can explain myself and I’m in control of the microphone, as opposed to Twitter, where it’s in the hands of the reader. Once I’m arguing, I’m losing, because now I’m defending a joke and that’s a position you never want to be in.

The guys from South Park have always insisted that either we can laugh at everything, or we can’t laugh at anything. Where’s the line for you?
Ideally that’s true, but everyone’s different. Some things hit close to home with people and it’s going to be hard to tell someone who lost somebody on 9/11 that a 9/11 joke is funny. Where are you going to draw that line? If I’m doing a show on Sunday at 7pm, that wouldn’t be the same show that I’d do at 11pm on a Saturday—it’s a different room at a different time of day with different sensibilities. That doesn’t mean you have to compromise your art but it is communication, you have to know how to talk to people. I’m not going to talk to your grandmother the way I talk to you. That’s one of the things that’s getting lost in social media—people don’t know how to talk to each other, they just say what they want to say, blunt and brutal. There’s no, listen, you’re talking to a person right now. There’s no, maybe I misunderstood. None of that. It’s all just, I hate you, you should die! Or, I love you, have my children! We don’t know how to communicate individual feelings and say, even though I don’t agree, I know where you’re coming from. That’s like the last thing you’ll ever read.

The mentality of the Internet seems to be that everything has to be either the best thing ever or the worst thing in the world, with nothing in between, so you get these extreme reactions.
I’m that way too! I’m a big Knicks fan and I will tell a professional basketball player that they suck because they didn’t do what I wanted them to do. I’m no better! It’s just weird when you’re the guy. “You suck!” Come on, man, I’m a professional comedian, I’m pretty sure I don’t suck… But that’s the way it’s always been, only now there’s an outlet where everyone can see it, as opposed to them yelling at their TV.

“Che” is actually your middle name. Does being named after a famous revolutionary make you feel like you have to tackle political issues?
I don’t really follow politics: To me, it’s a game of bullshit. I like comedy that’s not political, but social, dealing with issues of people talking to each other. No matter what your politics, we still have to live with each other. Politics is taking a side. I’m not running for office,
you know? 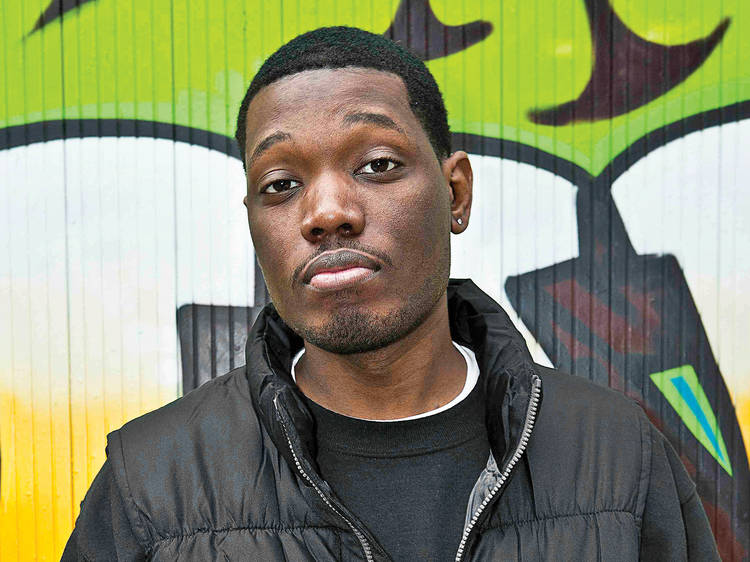 This young comic has been at stand-up for only a few years but his name is on everyone's lips: He's SNL's current "Weekend Update" anchor and in demand all around the city. Clearly a natural, Che's cool demeanor only hints at the landscape of bizarre opinions just beneath the surface.