The postmodern choreographer puts the capstone on a trilogy of extreme ambition, vulnerability and nonstop fabulousness

Choreographer Miguel Gutierrez, it turns out, is a portraitist, and his best subject is…himself. Of course, Gutierrez is also a serious dancemaker and glitter-decked provocateur: You may know him for explosive works like And lose the name of action or for his absurdist D.E.E.P. Aerobics sessions, participatory dance-alongs that blur the difference between observer and artist. Yet in his triumphant three-part Age & Beauty series—begun at the Whitney Biennial in 2014, continued this winter at Abrons Arts Center (at the American Realness Festival) and now brought full-circle at New York Live Arts—he explicitly holds the mirror up to his own nature. Looking carefully at himself has meant looking at the dance industry, at queerness, at collaboration and at a “gathered” family of makers and thinkers.

Age & Beauty has become a complex and hugely funny midcareer meditation on being “midcareer,” and as such, it makes gorgeousness out of mess: costumes and smeared makeup and (metaphorical) splinters of the fourth wall litter the space. In Part 1, Gutierrez placed his dancing 44-year-old body next to that of the elfin 25-year-old mickey mahar—and dared the audience to make comparisons; in Part 2, he and his real-life agent Thomas Benjamin Snapp Pryor read aloud from (satisfyingly gossipy) emails that laid bare the terrifying economics of contemporary dance performance. The everything-and-the-kitchen-sink vibe seems to be continuing: The full title of Part 3 is Age & Beauty Part 3: DANCER or You can make whatever the fuck you want but you'll only tour solos or The Powerful People or We are strong/We are powerful/We are beautiful/We are divine or &:'///. It's the biggest of the three, with a cast that includes Jen Rosenblit, Ishmael Houston-Jones, Alex Rodabaugh and Gutierrez's own eight-year-old godchild. If you once think you've seen how big Gutierrez can get, clearly he just goes bigger. Yet glittering in the chaos is a single, laser beam–like focus on—of all things—dignity.

Gutierrez put the final touches on the final installment at Bard as he spoke with us. Once Part 3 premieres at Bard's Fisher Center, it goes to New York Live Arts, where—for the first time—all three Parts will come together. NYLA's theater will have to wrench itself into new orientations for each Part (Part 1 happened in the corner of a gallery, Part 3 is more expansive), and the coproduction with the Crossing the Line festival promises to be one of the dance events of the season. As he rests “on a towel in my fake house up at Bard,” Gutierrez talks about his project as it comes toward completion.

How is Part 3 related to the Parts we have seen already?
This piece is the largest in scale: It has the biggest visual components, and the cast is a little bigger. I feel like Part 3 is a dream, the dream of the dark future [laughs]—it really does feel like that. I can't figure out which piece is taking place in the future, but certainly Part 2 is a rehashing or re-understanding of the past. So does this one look forward? Time is confusing right now!

How do you see Part 3?
It's a piece that's built by the reality of the cast—basically this fascinating constellation of dancers! Ishmael [Houston-Jones] is 64, and me and Jen Rosenblit and Alex [Rodabaugh] and Ezra [Azrieli Holzman], who is my godchild…it's this very queer assortment of humans that I've come to completely understand. Somehow, I've lost even the sense of its unusualness. That's the function of queerness in many ways—like the inspirational quote: “Where I'm from, you're strange.”

Age & Beauty really treads the line between theater and dance. Do you think of it in those terms? Is that a useful dichotomy for you?
I don't think in those terms, but I do look to theater as inspiration in terms of casting. I've gone full-circle with this: The reason I went to dance instead of theater was because I originally felt that my position as a gay person or as a Latino person could be more “neutral” in the '90s. I wanted to get away from that impossibly strict architecture in theater, under which you'd look at the casting calls and they'd say “looking for…dark-skinned Latino man.” I've come full-circle…now I can't bear to see dance that assumes that the people onstage are a neutral or universal body. The body tells so much of the story even before it makes a move (whatever the fuck a move is). The body's presence is also the way I distinguish myself from theater—in a body, the story can be very “multiple” at once.

A lot of Part 2 felt very painful—it spoke about the difficulties of making work, particularly the grueling economics. It lampooned grant-writing, and there were funders in the audience, and it also called out presenters in a very specific way. And yet, you're a major name in the field; you're not exactly crashing on couches anymore. Was it easier for you to say these things publicly because of your position?
I want to clarify: Yes, it is true that I hold a position in New York. My history is here; in New York, people have followed the work for years. But I gotta tell you, you go to a new town, and they say, "Who the fuck are you?" One of the things that's confusing in this field is that I'm successful, but success is precarious; it's at the whim of the market forces and people's desires and the sustainability of the funding cycle. I have very recently done a gig in San Francisco where I wasn't staying on a couch, exactly, but…I was staying at someone's house because the venue there had invited me, but it couldn't pay for its invitation in a real way. I do a great job of making myself look like things are going spankingly well. But that's hustling.

I don't feel that I want more than I have, I just acknowledge the relativity of it. The perception is, "Oh, he's a rockstar." And I kinda am! And yet I'm only able to pay my rent because I go away and sublet my place! I don't make money in New York. I never do well if I'm home for too long. I've sacrificed enough to be away 50 percent of the year, and it makes a lot of things amazing and possible, but it closes doors on a lot of other possibilities. Personal ones, particularly.

Did you get any pushback from the truth telling in Part 2? You are just really, really honest about how presenters make you feel, and your agent (Ben Pryor) is a presenter and the audience seemed to be mainly…presenters.
I think it's a privilege of success to risk failure…to risk being candid. One of the directives I gave to myself when I was making this series was: If I were to die the day after Part 3 ended, if I knew it would end, what would I give myself permission to say?

Originally I thought Part 2 would be just a total shit-talking show, but instead, it wound up being about the multiplicity of roles. I kept myself so busy, I didn't even have time to feel scared, and I always knew I didn't want it to come from a place of bitterness. The privileges and opportunities that I've had mean I can't be all "poor me," but it felt important to acknowledge the trappings of success.

And these are things I've struggled with all along in my career, with questions about the level of professionalization and institutionalizing you do to be a viable product in this field. There are so many people I admire who, whatever, can't answer a email on time or talk to a cultural gatekeeper. I hold those people in my heart. In my case, I had a fancy fucking education, I'm bicultural, and I can talk to the Man—but I  know that means that it forecloses certain directions. I feel like my role has been the court jester. It means I feel able to speak relatively honestly.

Looking now at the trilogy you've made—what is it?
Oh, god, there's ambivalence in it. It's something and nothing…

My intent for the past couple of years has been to make nothing. To make ghosts. I feel oppressed now by bodies in performance. For part of the building of this piece, I tricked the dancers. I asked them to go to the studio to rehearse one at a time, and then…I didn't show up. I called them. They were in the studio, and I was at home talking to them but absent. I was trying to figure out, "What does my presence actually do? Does it mean people align to my beliefs? Do my molecules affect them?" And then, I think every piece, whatever conceit you have originally, is blown open by what is actually going on. There's a kind of shadow that the thing casts. The piece ends on a note of ambivalence. I think that's truthful.

Is there anything you hope your audience knows walking into Age & Beauty?
You know…no. I mean, for me, I love not knowing; in an ideal world, I read the program after the show. But do read your program! The context notes are from a grant that I wrote that…actually…I didn't get. So definitely read those.

Some good must come of them.
Oh, yes. 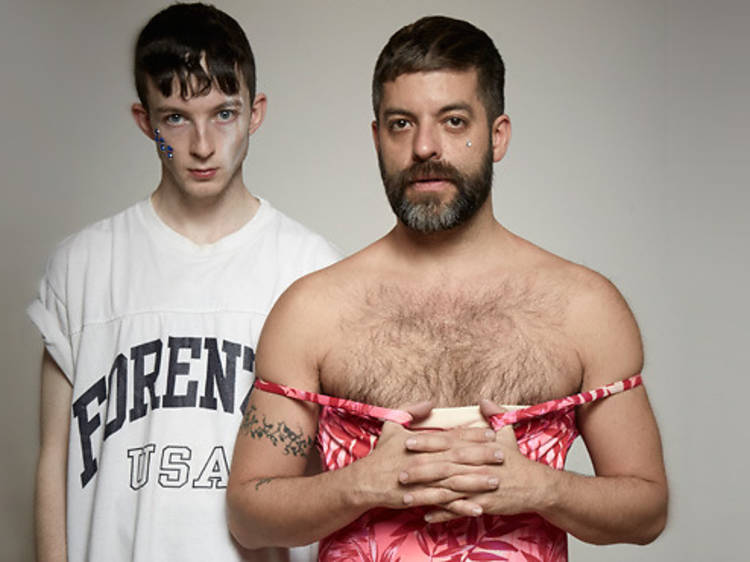 Miguel Gutierrez's reflective, hilarious dance trilogy about the dancer's body, queer aesthetics, aging and the ins-and-outs of administration appears in its full-blown, tripartite form. Even if you saw the other parts—performed at the Whitney and Abrons Arts Center—you'll still want to see what new transgressions Gutierrez has invented; in the first two sections, he's already bickered with his agent onstage and exposed the deep flaws in the dance-presenting ethos—we can only expect Part Three to be similarly explosive. All of the work's three parts appear in rep, so be sure to check the website for the full schedule.