Despite his stature as a major modern choreographer (most recently in the elegiac How Can You Stay In the House and Not Go Anywhere), Lemon slips free of the title for Scaffold Room. Here he is simultaneously movement maker, fine-artist, animating spirit, director, lecturer, documentarian and writer. In similarly sprawling fashion, Room has seemingly taken over the entirety of the Kitchen. Up staircases and behind columns, there are photographs, hidden paintings, installations, votives—look for the African ancestor idols that are dressed like Beyoncé and Jay Z—video and live performance. At certain hours, you might even stumble across a certain Judson Dance titan reading aloud from an S&M classic. (“She said, ‘You choose what I read, Ralph!’ So I chose!” Lemon laughs.)

In the conventional performance space on the ground floor, Lemon has constructed the Scaffold Room itself, a movable platform where Okwui Okpokwasili and April Matthis perform a kind of “solo piece for two” about the performance of black womanhood (shows run November 3 to 10, whereas the installation is open till December 5). In 2010’s How Can You Stay… Okpokwasili had played a kind of Lemon-avatar; she literally wept for (and as) him onstage. Interested in their intertwined dynamic, Lemon and Okpokwasili began work again. He read to her from various books; she wrote, then edited her “automatic” responses. Much of the resulting language is sexually charged—punk writer Kathy Acker was a major influence—and the show spirals around ideas of self-presentation, pop-culture and fetish. And so the work turned toward the spoken word. “I am fond of saying that this is my piece that’s all talking! And that’s not what I intended—that’s just where it went,” says Lemon. “Now, there’s maybe six minutes of moving. When I look back at How Can You Stay, it was clearly about me trying to erase a certain kind of ‘dancing’ as I knew it. I suppose it completed that task.”

At some point in the process, Okpokwasili, who just finished a run of her celebrated Bronx Gothic, began getting busy. “She’s an icon now herself!” says Lemon, half-joyful, half-chagrined. The answer was to get April Matthis—recently the title role in Fondly, Collette Richland at New York Theater Workshop—to play her. The hall-of-mirrors effect is purely intentional; during one of the “refractions” (performances in the “Graphic Reading Room” scheduled during the day), Lemon speaks the women’s text, “stealing” it back. “The locus of what we’re trying to talk about is how April thinks about Beyoncé, or how Okwui thinks about Amy Winehouse—but also how they relate to me,” explains Lemon. “When we started working together, April and I made an agreement: We didn’t know each other, and we agreed not to get to know each other. Whereas Okwui and I—we know each other too well.” Where does professional and personal relationship end? What part of that is performed? These are questions Lemon has asked his whole career long.

The third woman in Scaffold Room, for instance, appears in video, though never physically. This is Edna Carter, the daughter of Walter Carter, subject of much of Lemon’s attention and work for the last decade. In 2002, Lemon met the elder Carter (even then in his nineties) in Little Yazoo, Mississippi; in 2010, he died. “My work now is post-Walter,” says Lemon, a little wistfully. Yet in Lemon’s work, “gone” is very much not “forgotten.” He loves to braid science-fiction imagery through his work—photographs of space-suited pit-bulls and a wrecked spaceship hint at a parallel existence for the vanished Walter. Edna and others from Little Yazoo appear in strange, gentle rituals on video and in gleaming photographs on walls—they catch you by surprise as you turn around. Their deep colors and unforced loveliness glow down from the walls. They even outshine Beyoncé. 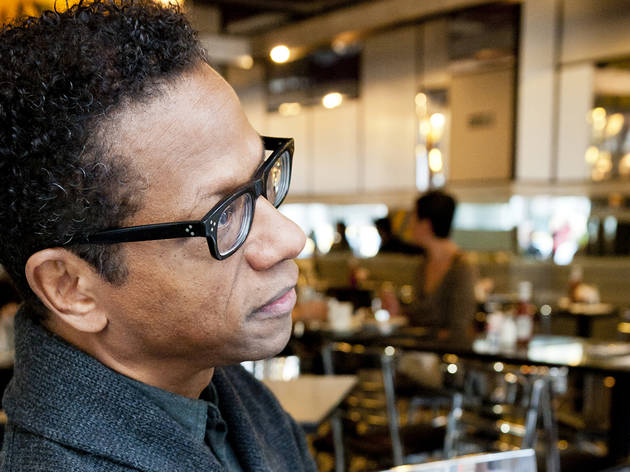 The multimedia theater-dance Scaffold Room by Ralph Lemon was made in collaboration with April Matthis, Roderick Murray, Okwui Okpokwasili, Marina Rosenfeld, Mike Taylor and Philip White—electric performers and thinkers who help Lemon investigate the representation of black women in popular culture—drawing on such diverse sources as Moms Mabley and Samuel R. Delany. Elements of the piece, including "refractions" by Lemon and readings from luminaries like Yvonne Rainer and Miguel Gutierrez, will be on view in various spaces at the Kitchen, but the more formal performance-presentation takes place at night at 8pm (November 3 to 10) in the downstairs theater.