Rashaun Mitchell, the former Merce Cunningham dancer turned choreographer, is paired with Sara Mearns, the New York City Ballet principal, for PLATFORM 2015: “Dancers, Buildings and People in the Streets.” For the Danspace Project platform, which is curated by Claudia La Rocco, six couples—artists with backgrounds related to George Balanchine, Merce Cunningham and Judson Dance Theater—participate in a series of Dance Dialogues. In the second of three presentations, Sterling Hyltin and Jodi Melnick share a program with Mitchell and Mearns; they’ve decided to make a cohesive evening, which Hyltin likens to a Venn diagram: Each pair will offer its own movement studies and meet in the middle, which produces a third pairing between Melnick and Mitchell, who says, “The surprise element of this is that I’m getting to share my practice with Jodi and vice versa.”

What are you thinking in terms of the platform?
I knew that I couldn’t be too ambitious with this project given the constraints of time and resources. I’m actually pretty excited about what we’re going to do. I started working with Sara, and since we’re from such different worlds, I felt like I wanted to locate a place where we could meet in the middle. We started with pedestrian experiences—meeting for lunch and talking and trying to get to know each other. We did some dancing in Central Park, and she had never improvised so I wanted to show her a little bit of what I do. We swung on swings and did cartwheels and rolled around in mulch and she taught me a little bit of her part in Balanchine’s Diamonds pas de deux. We’re at the fountain and I’m like, “What do you do next?” And she’s like, “And then I go over here…” It was pretty fun and people were watching and at that point I realized how much of a performer and kind of an exhibitionist she is. She was just loving it. I just wanted to take all of those experiences and try to bring them into the studio. We ended up making a dance routine in sneakers to a pop song; it seemed like the most simple and fun way to get started and to get to know each other as movers. I just wanted to find a way for this to be kind of playful.

Why?
Because the weight and the largeness of scale of the proposal was almost crushing. I was just trying to keep from getting bogged down in the pressure of that. In many ways, I feel like I actually rebelled a bit from the proposal, not in a dramatic way; I decided to draw outside the lines a little bit. I feel like Claudia would appreciate that anyway: that kind of questioning of the question. What I ended up doing was abandoning the idea of the pairings altogether in favor of working all together as a quartet and trying to do something more collaborative with Jodi, which has been really fun. An interesting relationship is forming so we’re all going to be doing something together and trying to patch these smaller studies together into one evening rather than creating a singular cohesive idea as a full-evening piece. And then I decided that I wanted to bring [choreographer] James Waring into it somehow.

I love him!
I’ve always been super fascinated by him. He’s also a prominent figure in and around this time, but is mostly peripheral or is almost forgotten. He was super influential in the mix of the Balanchine-Cunningham-Judson triangle. In my humble way, I’m trying to bring in a little bit of his humor and wit into it. I’ve also been interested in Anna Halprin and her use of improvisation and scores and her environmental concerns in the late ’50s and how that went on to influence the Judson innovators. So rather than focusing on the Judson innovators, I’m focusing on these other people that were around. I think I’m going to try to put the wrong thing inside of this somewhere too.

I’m thinking about the tradition of black-dance improvisation and how that was continuing concurrently with all of this—the idea of social and cultural dances and how they were happening in everyday spaces. I feel more connected to this idea of just grooving. [Laughs] So I’m actually going to be doing an improvisational solo to a contemporary R&B song, which I feel is exactly the wrong thing and why I’m interested in it. All of these things are going to get buried inside of the whole, and I don’t foresee it being at all close to a history lesson, but I do feel like there are these other things that need to have light shed on them. And I am making a solo for Sara, who is just so beautiful and glamorous and it’s like even when she’s rehearsing in the studio in sweats and she’s tired and struggling with a movement idea, she’s still just dripping with gorgeousness. It’s kind of overwhelming.

What is your focus?
I decided to go toward that beauty. To try to magnify it or exaggerate it or to bottle it up rather than shy away from it. I wanted her to contribute material rather than to just only play the role of the subordinate dancer. She’s teaching me her role in the Diamonds pas de deux, and I’m taking the duet and turning it into a solo and manipulating that movement. It doesn’t look anything like Balanchine, but we’re taking cues from some of the spatial ideas and some of her own personal narrative inside of how she performs it and rolling with that. She’s such a strong and independent and beautiful dancer, there’s something about the pas de deux where the man almost feels superfluous. I thought, You don’t need a man. You’re fine by yourself. Let’s figure out a way for you to dance this by yourself. I don’t know if I’m going to end up making this part of the program or not, but in my mind I’m calling it Cubic Zirconia in the Glamour Shadows. It’s sort of like a budget Diamonds. And Jodi and I are moving and dancing in the space with her, but more as a weird take on backup dancers to a glamorous ’60s pop star suspended in this time.

She’s also very earthy for such a glamorous ballerina. Isn’t that part about her so refreshing?
It is! I saw her in the Ratmansky-Peck-Wheeldon program and it was the first time I had gone to the ballet and not left angry. I enjoyed the program. I thought, Okay, there are some innovations happening here, at least for this stage and she always stands out to me as a really modern kind of ballerina. She’s strong and full, and she doesn’t hold back. I love that about her.

You’re a good friend of Claudia’s. Did you talk to her about this platform early on?
I think I was around the incubation period of the idea, and we talk a lot and she ran the idea by me. I think I was wholeheartedly open to it, but as soon as I started working on it, I realized how complicated it was. I think part of the complication is the notion that I’m connected to this Cunningham lineage even when I’m an artist who’s trying to forge my own identity, which I know is basically impossible. I will forever be in the shadow of Merce and in some ways that’s fine. I feel very lucky to have worked with him and the experience of being in his company is really influential in ways that I can’t even fully describe. I started taking Cunningham class again in the last month because I thought it was appropriate to go back into the work for this platform and because I knew I was going to be performing, I wanted to be in a dance shape. It’s pretty exciting to do the class and to deal with the challenge without having to do the work on top of it. [Laughs]

For the last couple of years I have not been studying the technique. I’ve been much more getting involved in my own improvisational practice and doing site-responsive work. I feel like I’m in a gray area as far as my relationship to these three nodal points. It seems like everyone is struggling with that a little bit. How do I fit in? Am I Judson? I didn’t know that I was Judson. I’m just hoping people don’t come expecting finished projects of great proportion, because they’re really not going to be that. Everyone’s doing their best and is really talented, but I feel the performances are more experiments and dialogues that are going to be public. I feel it’s more a beginning than an end. 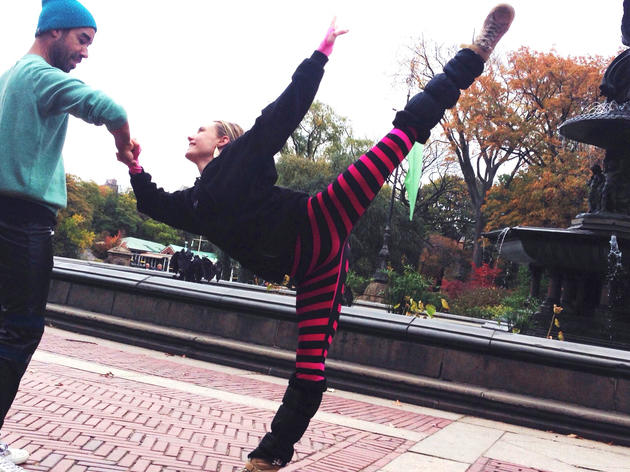