Sterling Hyltin, a principal with New York City Ballet, had never heard of contemporary dancer and choreographer Jodi Melnick before being paired with her for PLATFORM 2015: “Dancers, Buildings and People in the Streets.” Now she recognizes Melnick as the Wendy Whelan of the downtown world. “I am, like, primary when it comes to any sort of dance other than ballet,” she says. “It sounds horrible and it’s embarrassing, but that’s what this project is good for.” Here she talks about the Claudia La Rocco–curated platform.

How did you hear about this platform?
I think the first person Claudia was in contact with was Adrian [Danchig-Waring]. He brought it up to me before a show. We were both in the makeup room at New York City Ballet, and he asked me if I would be interested. I wasn’t entirely sure I understood it, but I felt like whatever he was saying sounded like an interesting learning experience, which I’m always game for. I think it was still a little bit confusing until we had our first meeting with all the participants. Then it all clicked.

Did you know Jodi Melnick’s work?
I did not. This has definitely been an eye-opening experience for me, and it’s not even out of ignorance by choice—at City Ballet, our schedule is so incredibly demanding that it doesn’t really leave much time and when we’re not here, I always get out of town. But now I’ll make much more of a conscious effort to see more.

How have you grown during this experience?
I think this experience has been extremely interesting as far as stretching me. I think it’s probably stretched me in ways more than it’s stretched Jodi. It’s also been a challenge for Jodi, and I’m not going to speak for her, but it just seems I’m getting a taste of a whole bunch of new flavors. I did see Jodi’s show, Moment Marigold, at BAM, and I was completely blown away by it—by her stamina, by her creativity, by her movement. I have a profound respect for her. The studio time has been very interesting because Jodi’s at Barnard [teaching], and she’s a choreographer. I’m a dancer.

How has that affected you?
There have been times in the studio where I realize I need to assert myself, because this is a project for us to both have input. We both feel very comfortable in our roles. I’m not saying she’s bossing me around by any means, but she’s very good at being, like, “Let’s do this,” and I’m like, “Okay.” But I’m creating and saying things like, “Why can’t we stop right here and you do a ballet pose?” Jodi’s not going to be in pointe shoes—nor am I—but it’s a completely different aesthetic. We have to do poses that she can do. And then I’m learning her own stuff, and I can’t do it nearly like her. It’s really this give and take.

Jodi’s movement is so intricate. Have you taken her dance class at Barnard?
I have not. I have been dying to go. I’m going to, but I don’t even know if it will be by the time we perform. I definitely see contact with Jodi as lasting beyond this project, for sure. That’s a wonderful added bonus.

Do you think this has opened your mind, not just to see other kinds of dance, but to do it as well?
Maybe eventually. I really love the stuff that we’ve come up with together. The little movements that Jodi makes would take me a million years to do. She’ll say, “Just mark through your choreography with your body, and then you have this cute little jive you’re doing in place,” and it looks completely interesting. There are things she does in the studio where I’m like, “Jodi, I can’t even get in that position!”

What is hard for you? What positions?
It’s more like floor work. My hips are not letting me roll the way she’s rolling. There’s probably a turned-in quality that I’m not getting—and I’m not being gross, like, I’m so turned-out, which is not the case. My muscles are trained to go out, not in, and they’re so tight that if I try to make them turn in. It’s physically hard. But it’s been really fun. It’s also been overwhelming for us at City Ballet just because this season has been a whirlwind.

When did you start in the studio?
We started in October, November. But I’ve had to put it on the backburner to get through City Ballet. Then I’ll set my focus to it. Meanwhile Jodi’s like, “We’re getting really close,” and I’m like, “We’ve got tons of time.” It’s really funny—we’re just used to pulling dances together so quickly.

Is she encouraging you to create?
Definitely. It’s been hard for me. It’s easier for me when she starts something. We’ve done improvs where we’ve just danced around to Beyoncé and filmed it, and just did whatever we felt like doing, and incorporated both of our movements. So it’s been very collaborative in that sense. There are times when she would choreograph a segment, and I could go off of that and say, “Right here, we could do this.” And there have been times when she’s said, “Give me eight counts of moves,” and I’ve done it, which surprised me. She’s good at telling me how to do things. Sometimes that’s really hard to do—to tell somebody how to do something that is really innate. It’s very funny because when we first got together for coffee, I asked, “Does music inspire you when you choreograph?” And she said, “Absolutely not. If I could spend 81 percent of my life in dead silence, I’d be so happy.” She was like, “I don’t add music until later and it’s just because it’s a necessity for the audience, but if I had it my way I wouldn’t do any music for the entire night.” It’s so funny because there have been times when I’ve said, “We could put this piece with this piece, we could do this,” and she’s like, “You’re already at the end goal. We’re not at the end goal yet. We’re just going to do little nuggets and then we’re going to see what we have then. But don’t start piecing it together yet, because we’re not done making our nuggets.” You see our different mentalities.

What's the difference?
A lot of my mentality comes from City Ballet where we’re all, “Put this together—fast,” and “Let’s do this and let’s do this, and I want to know what I’m doing and that way I can make it better.” She’s like, “Let’s not put anything together yet,” and I’m like, “What?” It’s so interesting. That was me at the beginning—I learned to relax. Now I’m relaxed, and she’ll be like, “Let’s put it together!” and then I’m like, “It’ll come together!” In a way we’ve completely swapped.

Have you brought any part of this platform into the way that you work at City Ballet—your performing or rehearsing?
I think I have tried to bring that calmness in, which has helped a lot. I’ve been forced to remind myself, you can speak up—you have a voice. This situation has helped me to speak up a little bit more at work, in the sense of, “I don’t know if this arm is the best for me. Is there any way I can do this arm?” If it’s Peter [Martins]’s choreography—not Balanchine’s, of course, because that’s all set. But I’m making active decisions more and more. I’m becoming more vocal, and I think it’s helping me have more of a presence, and when you feel that presence in the studio, you feel even more of a presence onstage. I think it’s been an interesting season because of that for me. 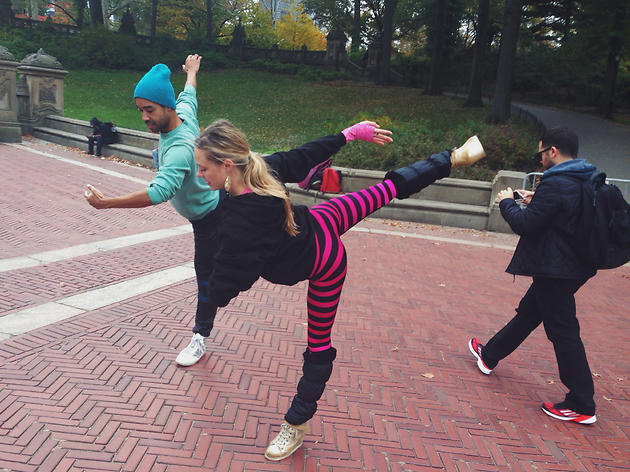