My Account My Profile Sign out
My Account
Search
Worldwide North America United States New York State New York Blondie’s Debbie Harry talks her new cabaret show and the power of sexuality
Advertising
Debbie Harry is spectacular and she’s real. That dual identity has been at the core of her magnetism since the Blondie frontwoman’s rise to rock stardom in the mid-1970s: She’s a glamour girl who is happy to let her roots show through, from her signature dyed-blond hair to the charming North Jersey accent she never lost. A massive influence on the likes of Julian Casablancas and Karen O, the 69-year old downtown icon is preparing for her sold-out debut at perhaps the most uptown music club in the city: Café Carlyle, New York’s most elegant cabaret boîte. We caught up with the star, who still calls NYC home, about the swanky new venture and her seedier salad days.
Onstage, you seem pretty unflappable. What flaps you?
I’m totally flappable—and I shall remain flappable, I promise! [Laughs] No, I get thrown off constantly. Are you kidding? Something will catch my eye in the audience, or somebody will be singing along with me but louder than me and with different words.

Have you decided yet what you’ll be performing at the Carlyle?
I’m gonna do all the songs that I never get to do with Blondie—the more romantic songs, mostly from my solo albums, and a few cover songs. It will be, I hope, a very interactive kind of thing, because I don’t often get to be so close to the audience, almost at a conversational level.

So no Great American Songbook standards?
God, no! Better say it loud and clear: I don’t want anybody showing up thinking that’s what they’re going to get, because they’re definitely not getting that. I have nothing against those songs, but I feel like I have to be a bit genuine and not try to do material that is not really identified with me. I know a lot of my fans from Blondie are going to come, and I’m hoping they can get comfortable in that environment.

The Carlyle is a long way from the clubs you’re associated with, like Max’s Kansas City, CBGB and Jackie 60. Are you still plugged into the downtown scene?
I have friends who are DJs, and I try to see performances of people that I know. You know, little one-off things. But I don’t think I’m really a club kid anymore.

What made those places such breeding grounds for creativity?
The thing that sticks out in my mind about why any of those places were important is that they were very personal. The owners were doing it; it was their concept, and they were there on a daily basis.

Do you think that’s still possible, or has New York changed? Are artists being priced out?
It’s a different city now. At one time, it was a mecca for artists and musicians, and I think it’s not so much that anymore. There are musicians and bands, but they’re on the fringes of Brooklyn and Queens. They’re definitely not in the heart of the city anymore. And it’s pretty much the same in a lot of major cultural centers around the world. Very sad.

How did the 1970s club scene shape Blondie’s music?
We were in the metropolitan melting pot, where all of these different styles of music came together or still do come together. And this was before the Internet; unless you really went to record stores and went to a lot of gigs, you wouldn’t find this music. I guess, in a way, that’s why our music has stood the test of time: We were adventurous, and we tried to blend a lot of different sensibilities, because we felt that was a sensibility.

There’s something very New York about the mix of influences on those albums: rock, punk, pop, doo-wop, reggae, rap…
We definitely are not considered purists in the rock & roll thing. Gene Simmons has declared vehemently that we do not belong in the Rock and Roll Hall of Fame. But, you know, to each his peach, right? Everybody’s got a different idea.

What pop singers interest you today?
I love Sia. She was great when she was just writing for people, and it’s amazing that she’s made this transition into becoming a performance artist and singer—this sort of creature, the faceless pop star. One thing I’ve noticed lately is a surreal aspect being brought into live performance. Did you see the Kanye West thing on [the Saturday Night Live 40th-anniversary show]? What did you think?

I thought it was a neat concept.
Yeah! Me too. I’ve always liked that—when people come out and do odd movements or some kind of strange dance. I remember doing some very early shows with Blondie, just standing there holding up a fishbowl with a goldfish in it.

You’ve often put sex right up front in your work. What’s your feeling about how young women like Miley Cyrus are using it now?
I’ve always felt that sex is the primary, fundamental attraction that performers bring to their performance. It’s really because of the freeing up of the sexes that things have become more explicit. If a girl does something that a man has done previously, it’s more noticeable. But I think it’s playful and fun for the most part, and people are interested in that.

And what about you? How much sexuality do you still bring to your performances?
A lot, I hope! [Laughs] As much as I can. As much as I have strength for, I suppose. 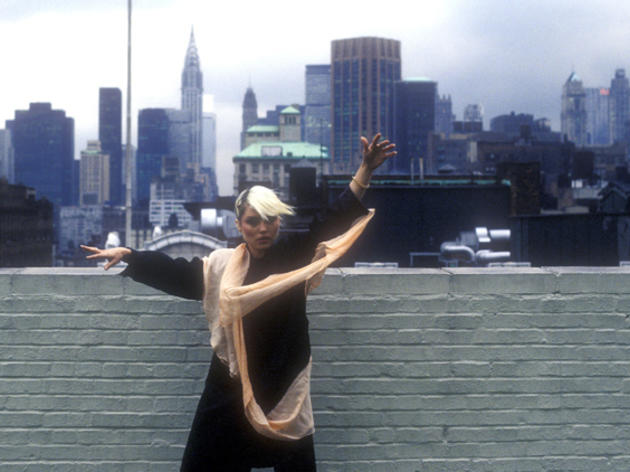 If there's one artist who epitomizes the New York downtown scene of the late ’70s and early ’80s, it's Debbie Harry. Feast your eyes on the Queen of Cool, elegantly demonstrating why NYC is the greatest city in the world.