You can help revitalize Chinatown one paper lantern at a time.

As we enter another dark pandemic winter, a small group of Chinatown residents decided what their neighborhood needed was a little bit of light.

Right now, hundreds of paper lanterns are glowing above Mott Street—between Canal and Bayard streets—casting a warm and inviting glow. Installed by the Light Up Chinatown Project, the new fixtures are intended to light up the street in these dark times, and also inspire New Yorkers and tourists to stop by and visit hurting restaurants and shops.

The effect is magical—the lanterns mimic a celebratory atmosphere despite the difficult times and have already gained a lot of attention and Instagram posts.

Each of the 250 lanterns represents a donation of $45 or more to the Light Up Chinatown project. The project began in the fall when Patrick Mock of 46 Mott Street Bakery (who has also been providing meals to the homeless and older Chinatown residents) looked around the block and saw how dark things were. He began to wonder how the remaining restaurants with outdoor dining were going to stay open, according to Chung Seto, a longtime resident and Democratic strategist.

After that, Mock teamed up with Seto and Joanne Kwong from Pearl River Mart as well as the Chinese Consolidated Benevolent Association, the Chinese Chamber of Commerce, Send Chinatown Love and UDO to get Chinatown lit up.

Mock, Seto and Kwong were particularly inspired by the lit lanterns that hang in San Francisco's Chinatown and took their idea to the Chinatown Business Improvement District, which started them off with $21,000. From there, they were able to get an $8,000 grant from the Chinese Chamber of Commerce and then raised more than $45,000 through grants, donations and the $150 lantern adoptions.

Each of the lanterns, which are coated in nylon and weatherized, are also individually designed and personalized.

Kwong oversees the design and personalization of each lantern, and first decided that the color scheme would need to provide a "wow factor" and "immediately signal joy and hope since it's been such a dark time for so many," she said.

She ended up picking gold, orange, pink, and violet—the gold and orange signaled warmth and brightness, and the pink and violet gave the palette a playful feel. Altogether, the effect is "almost tropical," she said.

Each lantern is personalized with names and Chinese calligraphy by the New York Chinese Cultural Center and Think!Chinatown's artists painted anything they wanted in three paint colors: kawaii cartoons, emoji faces, handprints, pretty flowers and foliage, bold shapes and patterns. These four artists contributed 15 lanterns each.

"I love how the mix turned out," Kwong said. "The simplicity and meaning of the characters, coupled with the occasional pop of fun from a young, talented local artist, on an unexpected palette of almost tropical colors, all personalized with the names of people who supported the initiative sends a message to the city and the neighborhood—hang in there, the world is still beautiful, please enjoy these good wishes from all of us in Chinatown that will hopefully bring a smile to your face."

The first batch was strung across Mott Street in December and—though it took many hours to install—the end result was instantly "surreal," according to Wendy He of Send Chinatown Love, an organization that works to support Chinatown.

"It's a really phenomenal feeling," Seto added. "I was very emotional when it was done and it just immediately lit up all of the block."

This isn't the end, however, the organizers plan to keep the fundraising going for another batch on Bayard Street. There's a GoFundMe page set up for that second phase, and the end game is to light every block of the neighborhood—permanently.

"The first night, the [business owners] were showing me the photos they took," Seto said. "They were so excited. There's been a big difference—this project has really brought some hope to business owners and that's what we wanted to achieve." 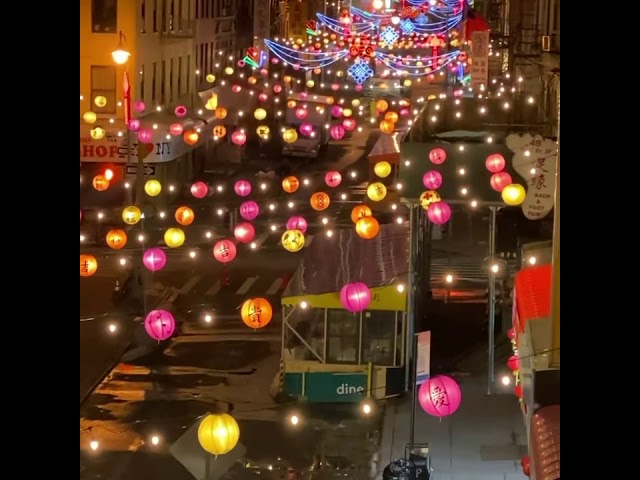