In a career spanning almost 40 years, DJ Harvey has always found himself in the right place at the right time

Wildest Dreams. Locussolus. Ersatz. Tonka Sound System. Map of Africa. Black Cock. You can call Harvey Bassett many things, just don't call him lazy. He’s been a postpunk drummer, a balearic dance producer, a disco re-editor, the frontman for his own satanic-folk band and, most predominantly, a disc jockey. One of the last DJs to work with the Paradise Garage’s Larry Levan, Harvey’s genre-free all-night sets are the stuff of legend, almost as much as the man himself is. The U.K. expat—one of the main highlights in our top DJs to see this fall—now lives in L.A. but plays the best clubs around the world and makes frequent trips here to the city that helped form much of his musical identity.

This is your first time playing Output. What do you look for in a club?
The most important thing is the security. If the security are assholes, it’s quite difficult to have a good time. Secondly are the toilets. Bathrooms should be well kept and there should be enough of them. Sound systems are third on the list after that. A nice mixed crowd is a good thing to have, too; people of all persuasions and denominations.

A video of a wasted fan diving into the turntables at a gig recently went viral. Can you take us through that play-by-play?
I was chugging along having a lovely time, there was this very nice family vibe going and the next thing I know there was an upside down person falling in my direction, heading toward the decks. I took a breath because I thought he might pull off some kind of amazing headspin or something, but he obviously wasn’t in control. So I just gave him a good shove back into the crowd and that was it really. He kind of fell between booth and the front of the staging and he looked up at me with the face of a Chihuahua. His tongue was hanging out, his eyes were pointing in opposite directions and I’m like, Man this guy is from Planet Chihuahua! And I just had to smile to myself because I know he picked up a couple of bruises falling on his ass. But everyone was like, well that’s entertainment and it was actually quite amusing. If I can find out who he is, I will put him on the guest list so people can take a picture with him at the next show. You can’t buy press like that though. It would have cost me a fortune to rent that guy and get all that coverage so, thanks dude, this Tecate’s on me!

I know you’re not a big computer guy, but has technology changed digging for music much for you?
Very rarely do I seriously dig in these days, it just happens…music just comes my way by every channel that’s out there. Just as I sort of stumble through life, I just come across stuff. Suggestions, promos, staying tuned to a television show or movie, something on the radio. My girlfriend playing her iPod in the car and I’m like, “What's that?” Or I could get a phone call from a record dealer where he says he's just got a shipment from Africa and there might be some stuff that I’d be interested in. The only people that are picky about formats aren’t DJs. Real DJs don’t give a damn. As long as you’re nice to the people with a good quality file or record, it's about choosing from all the music that’s ever been made to the best of your ability to entertain the majority of the people in front of you…that’s it.

Last time we chatted, you told me about the documentary on Leon Theremin, The Electronic Odyssey, who invented the theremin, was kidnapped by the KGB and has this incredible story. That was a great recommendation. I’m kinda surprised they haven’t turned it into an Oscar-winning biopic already.
He’s an amazing, almost Tesla-like character with an amazing story for sure. Romance, intrigue, espionage…everything. Yeah, you know, I think truth is stranger than fiction so documentaries are the way to go. It’s mind-blowing stuff that actually happens. I always thought Yuri Gagarin’s life was another wonderful Russian story. He was the first man in space and his best friend chose to die on the next space flight, which was a suicide mission because Yuri couldn’t, so it's this beautiful, romantic space story. I just don’t think Hollywood likes stories where Russians win.

True…that is true. At this point, people must have asked to do a documentary on you.
I think it would be extremely boring. I don’t know, many people have asked, but would you really want to spend half your life in corridors? I mean…there are moments of rock & roll greatness I suppose, things that journalists thrive on, but the problem with nightlife is that you cannot document it because it goes on inside people heads, so its impossible to really grasp because it’s only as real as a dream and no one’s figured out how to film a dream yet. Dreams have this silly, fantastical realm but you can’t explain a dream unless you’ve experienced it. Nightclubbing isn’t a massive sport, but if you don’t go and do it, logging in is not an option.

Explain your concept of “record divining” to me. Is that something you actually believe or are you just havin’ a laugh?
I don’t know, there must be other diggers out there that divine as well, whether they really know what they’re doing or not or whether they’re just certain feelings you get that appear to be divining. Like if you’re in the presence of an old record, you get that itchy feeling and you’re like, Oh I’m getting that sixth sense! Yeah, or it might actually just be a dust allergy. It’s a fun kind of concept to toy with though, you know? Like carbon-based life forms, things being magnetized, holding codes, messages or crystal skulls that hold information that gives some people visions when they’re in their presence.

Wait, just so we’re clear: It's the skulls that give you the visions—or holding codes—so you know what records to buy…unless you're a non-carbon-based lifeform with a dust allergy?
Look up crystal skulls! There are a few of them around and they’re magical things. Quartz crystal is basically what computer chips are made from so we know it can hold information, but you need a machine to play it. In this case, the computer sort of reads the chip for you because not many people have a skull player anymore so it’s hard to get the information from. Carbon, when its activated and deactivated, is a switch—zeros and ones—so you can basically get it to retain information. If you have the right player you can get it to play the information back. I think that’s how when you walk into a building, you get a vibe…that’s just the building playing back what happened in it.

“Building vibes!” Trust me, I’m gonna check it out. What do you think of the current state of international clubbing?
People love to moan and I’m just not having it. I don’t look back to a time when it was better. I’m looking at a time right now when it’s absolutely amazing. I played 32 parties this summer and I can safely say two-thirds of them are as good as any party that ever existed. You have to engage. You have to take part. It takes two to tango…you know? Just rolling up somewhere and expecting to be entertained might not be the way to do it. You should become the entertainment. So many things contributed to why something like Paradise Garage was a great situation. The time, the place, the owners, the DJs, the crowd, the music, the political climate; so many factors in that recipe that created the beautiful thing that was the Garage. Now, that will never happen again. There will never be that exact recipe. But that’s not to say there cannot be amazing club situations in the world. There are right now, and I know because I’ve just played most of them…like situations where people were singing along to records, there were people crying because they were so happy. People dancing in abandon. People having sex on the dance floor. Whatever the things people think make a great night. Like, “Oh it was so good that people were just fucking!!” I mean you can only get so high—and then you die.

You make entertaining look good which is the job of the entertainer. To say: Look at this. You want to be at this party.
You know, you hear people say that they don’t give a fuck, well I actually care an awful lot. I feel personally responsible for everyone that comes to hear me play. I’ve also learned to wait gracefully. I was told that Salvador Dali enjoyed waiting because it was free time in which to meditate. You’re actually waiting for someone else, so its not your fault. And you can actually become completely relaxed instead of getting stressed out. My flight is delayed by six hours? Great, well, now I have six hours that I don’t need to worry about anything instead of six hours panicking. But I’m very lucky. My average day is like most peoples’ birthday and Christmas rolled into one. But by somehow pointing myself in the general direction of things I hope to achieve, I’ve managed to achieve that. I just plug myself loosely in and it happens. 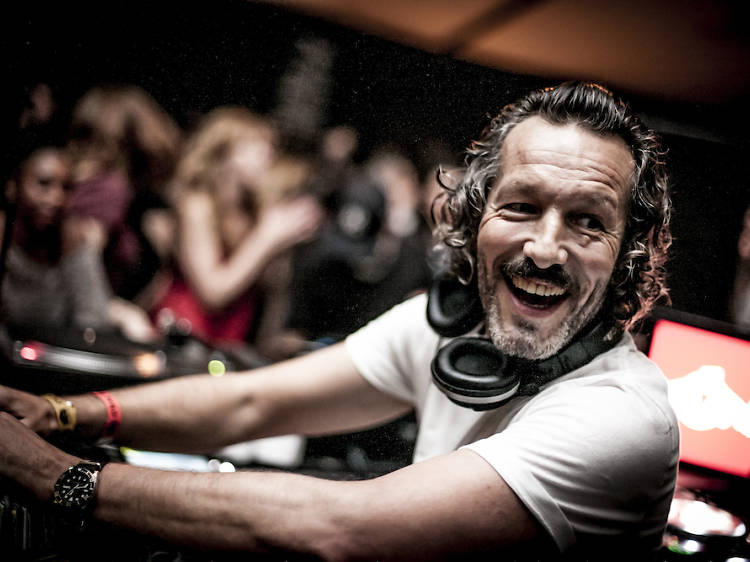 DJ Harvey has been playing music in one form or another for the past 40 years. He's been a postpunk drummer, a dance producer, the frontman for his own psych-rock band and, most predominantly, a disc jockey. One of the last DJs to work with Larry Levan, his sets are the stuff of legend.