The superclub era may be over, but there's tons of amazing new parties, venues and after-hours popping up all around us

For almost 50 years, New York City has been an international icon of nighttime culture, the standard against which all other after-dark city scenes are measured. But it’s time to face the music, people: Much like a 50-year-old clubber, time has not, at least on the surface, been kind to us. In that time, we’ve given other hungry metropolises across the pond—like London, where clubbing is basically a national sport, or Berlin, whose 24-hour anything-goes hijinks draw hedonists from around the globe—to rise up and steal our spotlight. It seems only fair, since until recently, we barely had an interest in a musical genre we created and then discarded, left for others to improve upon. Once we came back around to it though, our renewed interest—and subsequent national marketing rebranding—seemed to confound us even more. Stripped of its outsider status, dance music was at another crossroads. We weathered a shitstorm of god-awful trends like the “models-and-bottles” craze, pre-dawn sober raves, bridge-and-tunnel superclubs, naked body painting parties, cabaret laws and celebrity DJs and bounced back, but to where? The iconic venues of New York’s past nightlife heyday—Studio 54 and Paradise Garage in the ’70s, the Limelight and Area in the ’80s, hell, even Twilo and Centro-Fly in the ’90s—are sadly just that: gone. But if you dig a little deeper, you’ll see that nightlife in New York is actually having a renaissance of sorts. Sure, we may not have one iconically essential nightclub anymore, but, honestly, who cares, given that we now have more parties, more venues and more fun than we have in years? It seems that New York, like Stella, got her groove back.

“People love to moan, and I’m just not having it,” house legend DJ Harvey tells me. “I don’t look back to a time when it was better. I’m looking at a time right now, when it’s absolutely amazing.” Hold on—amazing? While Output and Verboten scoop up all the big marquee-name DJ bookings in virtually every conceivable genre, everywhere else has been facing skyrocketing rents and widespread gentrification, and—like most other local industries—is being priced out of the city it helped create. In the last two years alone, venues like 285 Kent, Glasslands, Cameo, Westway, SRB and two different iterations of Ibiza mainstay Sankeys have all closed up shop. So if nightclubs can’t afford to stay in business, where will people party? The answer, it turns out, is wherever the hell they can. Promoters and DJs wisely adapted by pivoting into a new business model, making their parties completely mobile and able to take over legitimate venues still standing and out-of-the-way lofts and warehouses. And the reason it’s working is that the demand for nightlife has never been higher. “The amount of people going out to dance now is just so much larger than before,” says Josh “JDH” Houtkin of the 11-year-old Fixed party. “And everyone involved is willing to work together to make things better.”

It’s that willingness to work hard—and throw a party virtually anywhere—that’s allowing us to play even harder. Taking a page from DIY endeavors like the Marcy Hotel or Trip House, nightclubs now welcome bands (Palisades), comedy (the Bell House), Ping-Pong (Nowadays) and food (Black Flamingo). “If you really wanna make it happen, you figure out a way,” says Paul Nickerson, half of the DJ collective Slow to Speak. “You break your back carrying speakers, spend all day decorating, bust your ass deejaying—repeat, fail, repeat—and after a couple years, if you still have the wherewithal to keep going, it will work,” And it is working. Our wilderness period—which helped break up this monopolistic mindstate of one superclub sucking up all the best parties—could actually have been a blessing in disguise designed to send nightlife’s energy back where it belongs: underground. So don’t go crying about our glory days being over just yet. All things must pass, and there’s no room for nostalgia for things that, by their very nature, are inherently cyclical. The sun sets and it rises; clubs close and open; and the party always has to end sometime. Was it Thomas Fuller or Batman who said “the night is always darkest before the dawn?” Regardless, clearly neither of them have ever been to a NYC warehouse party. If they had, they’d know that like this city’s club scene, there’s still quite a bit of night left in the light of day. 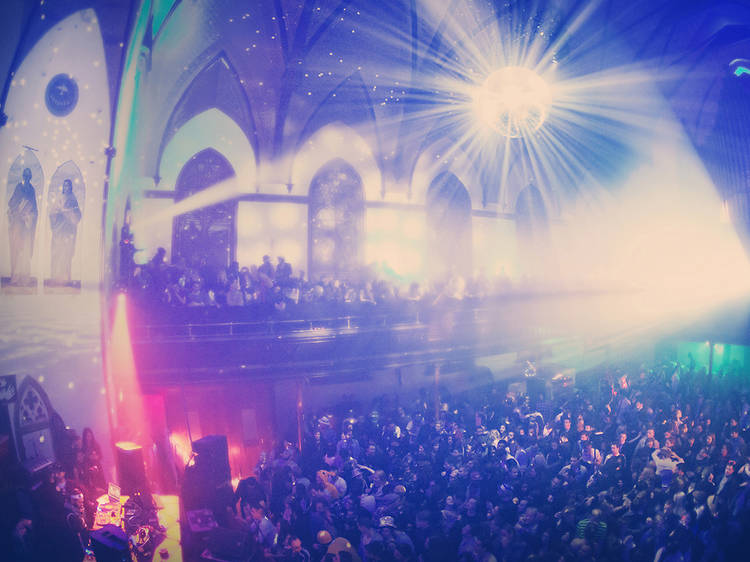 Here are the best ways to get your rocks off—whether you're a nightlife newbie, seasoned partier or someone in between