Upstarts can lose their edge sometimes, trading in indie glory for prime time’s demands. And so it seemed at Aska—the permanent replacement for Frej, the New Nordic pop-up young Swede Fredrik Berselius ran for a while in Williamsburg’s Kinfolk Studios (with now-departed co-chef Richard Kuo). A December test-drive of the new incarnation found a longer, more expensive menu with fewer triumphs than at its thrilling precursor. In the months since, though, the avant-garde restaurant has steadied itself, recapturing the sense of wonder it had when the kitchen’s strange new ideas were also delicious to eat.

Most nights, the new full-time version, which Berselius is driving solo, has the scrappy feel of very good improv. There’s a gung ho cohesion in the restaurant’s warm crew, all with hyphenate jobs—hostess-waitress, manager-barkeep, food runner–chef—as enchanted as their adventurous new Brooklyn patrons to be a part of this place.

The cool, breezy space—a naturalist wood bar in the middle, small tables near the game-bird mural in back—serves experimental cooking by a risk-taking chef. His hyperseasonal menu, featuring the kinds of foraged ingredients and naturalist plating that have helped make Scandinavia’s cutting-edge restaurants among the hottest on earth, includes fun flights of fancy, occasional flashes of brilliance and, for most New York diners, lots of new tastes.

To begin, you might dip a toe in at the bar. Even the budget snacks there showcase the kitchen’s self-confident flair. Golden potato-pork dumplings are almost supernaturally fluffy. Delicate house-smoked trout, on crispy crackers speckled with dill sauce and pebble potatoes, is an artful montage.

But soon enough, most bar-top diners succumb to an envious impulse, as wilder plates zip by, hustled out of the kitchen by fresh-faced chefs. They’re part of the set menu, seven courses plus extras for the serious bargain of $65 (on weekends, the price, and number of courses, goes up to ten for $115).

It starts with good bread, warm house-made caraway rolls, and exceptional butter, followed by a few sharp bites—a pork-blood chip with tangy sea-buckthorn (an arctic berry), say, or a single sweet shrimp draped raw over its crispy fried head—amuses intense enough to awaken the palate, tiny enough not to crush it.

A gorgeous trompe l’oeil first course, in the last gray gasp of winter, featured a hay-roasted beet channeling a rare hunk of beef—in its dense texture and deep crimson hue—topped in sweet melted onions and a caramelized vegetable broth so concentrated, it could pass for veal jus. Berselius is an alchemist with the most modest ingredients. His succulent sticky roasted pig’s trotter with tangy-sweet apple puree arrived buried under a mountain of translucent sunchoke slivers, adding a beautiful earthy note, like a poor man’s white truffle.

The turbocharged Nantucket bay scallop that followed tasted like much more of itself, the sweet muscle amped up by the shard of scallop “leather” it came with and by a small potent shot of reduced scallop broth.

Other courses—poached oyster in cucumber broth, pillowy monkfish with sweet-smoky salsify—were just as offbeat and delicious. Berselius, though, still has some wild-card experiments, including a roasted veal shank covered in unappealing accents: sulfurous fermented rutabaga and the spoiled dairy scent from caramelized cream seasoned with soured milk.

At this price, in this playful setting, it’s easy enough to forgive that single stumble—clearly an acquired taste—among so many daredevil dishes. Innovation, after all, needs trial and error. Wondering where this kitchen goes next is a big part of the fun.

Drink this: The eclectic wine list focuses on German riesling and French beaujolais. A light Chenas from Potel-Aviron ($55) has a great mix of acid and fruit that’ll carry you through to the end of the meal. The creative cocktails include the carrot-sweetened old-fashioned, Silly Rabbit, and the Dill Breaker, an icy martini of sorts featuring dill-infused gin, a touch of lime sugar and house-made vermouth.

Conversation piece: Kinfolk Studios, the multidisciplinary design group (best known for its custom-made bikes) that operates this space, also runs a cocktail bar in Tokyo. Its Williamsburg footprint will soon expand into the 3,500-square-foot space next door, where it hopes to have live music, a clothing shop and an additional bar. 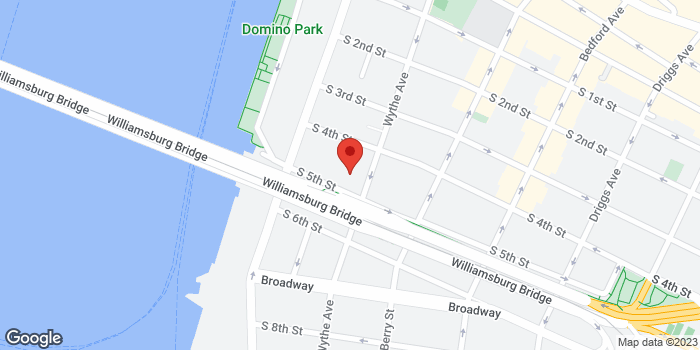