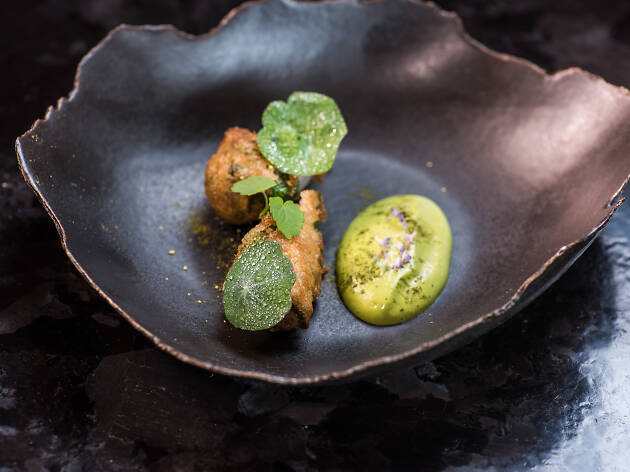 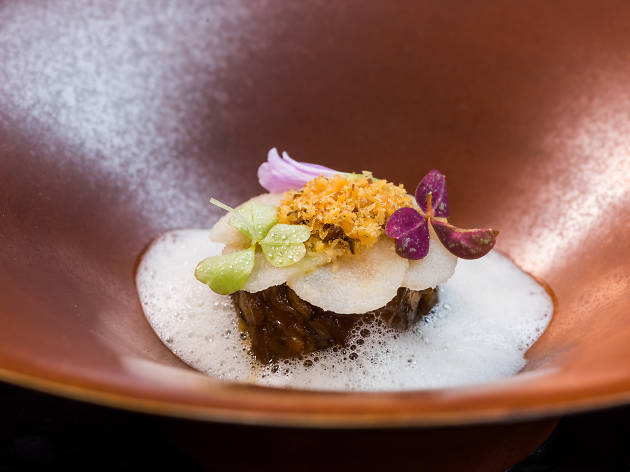 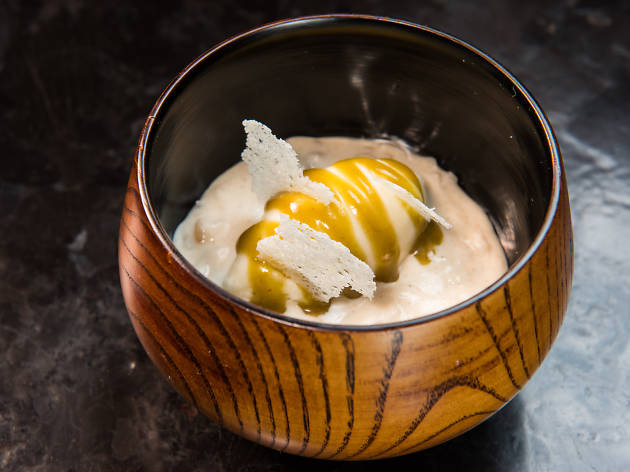 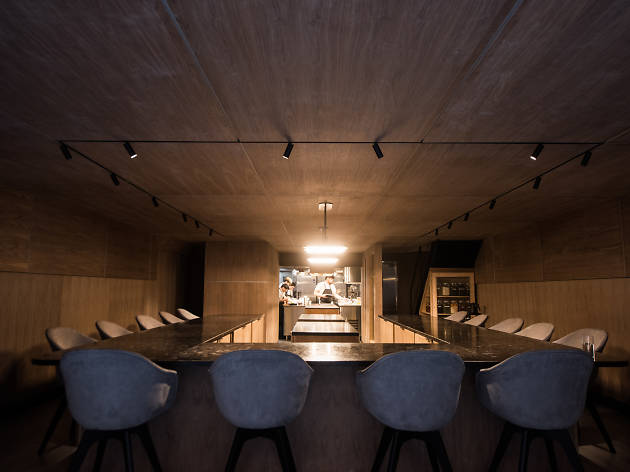 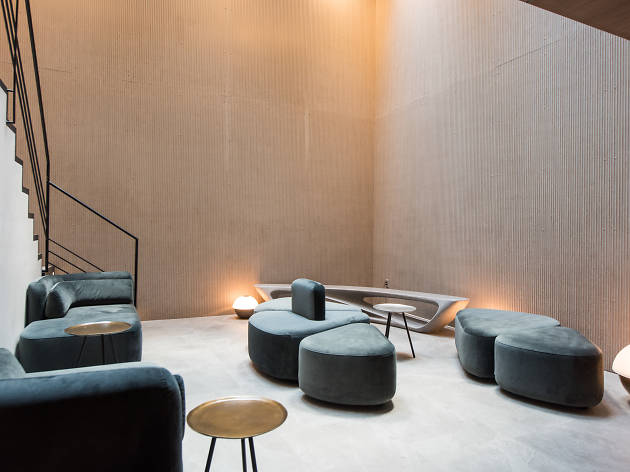 In an age when people lose their minds over speakeasies hidden in hot-dog shops and ice cream parlors, Atomix tops them all with the most New York way of hiding a fine-dining Korean restaurant: It’s tucked inside the foyer of a walk-up apartment building on the border of Nomad and Murray Hill.

After walking past the entrance twice, I rang the doorbell, signaling a large black door to open and reveal the sleek, wood-heavy bar. My dining companion and I were ushered down a flight of stairs into the almost-futuristic dining room: Geometric couches are scattered around the stone-floor lounge, where you can enjoy snacks before heading to one of the 14 gray-suede chairs at the U-shaped, black-granite counter that overlooks the immaculate kitchen. It’s as if the average upscale restaurant in NYC got a dash of Tron.

Atomix has no menus; instead, you collect a series of cards throughout the 10-course, $175-per-person tasting menu, served at 6pm and 9pm seatings. The meal began with a letter from chef JungHyun Park, who introduced his mission to embrace traditional Korean cooking while putting his modern spin on every dish. With each course, another card arrived at the table as if turning the page to the next chapter of the gastronomic story, meticulously describing the components of each dish alongside a little Snapple-cap–like nugget of history or culinary knowledge, like a profile on ganjang (Korean soy sauce) or how the spot’s chefs process their rice in-house to fall somewhere between white and brown.

Throughout the evening, the progression of nuanced dishes showcased ingredients and techniques that I’d never encountered let alone associated with Korean cuisine. Deep-fried langoustine with creamed uni and nasturtium provided an ethereal crunch as I experienced the tongue-tingling sensation of chopi (seed pods used in Korea for seasoning before chili peppers made their way over from the Americas). Briny caviar over delicate baby artichokes and fresh cheese curds offered an unusual and delightful melange of creaminess and acidity as I read about the history of dairy in the region around 57 BC.

Just when we thought the tasting menu had reached its peak, the chef appeared to display a whole turbot, grilled and braised in a rich, dried-seafood stock. Each bite was a memorable burst of umami, unlike what I would expect from the delicate and mild fish. The courses flowed from savory to sweet, ending with a bowl of heavenly rice pudding made with caramelized scorched rice (nurungji) and topped with rice-flavored ice cream.

The narrative of the meal concluded with a quasi-poem from the general manager (and the chef’s wife), JeongEun Park, thanking us for joining them for dinner and wishing us a brighter tomorrow, then she packed up the cards for us to take home. This story came to an end shortly after midnight, but it’s a bedtime tale I’ll be retelling for many nights to come.